Module 2: Implementing Optogenetics in the Lab — Getting Started

Learn basic approaches for implementing optogenetics methods to investigate brain function, including how to choose optogenetics versus other approaches, parameters for opsin selection, and pros and cons of different delivery methods.

After reviewing the materials in Module 2, you should be able to:

Complete this short survey to provide valuable feedback about Module 2 to SfN and the series faculty.

Module 2A: Implementing Optogenetics in the Lab – Why Use Optogenetic Methods?

In this presentation, Christina Gremel will cover why and when to use optogenetics to investigate brain function. Specifically, Gremel will:

After watching this presentation, you should be able to gain a general understanding on what optogenetics offers when exploring neural bases of behavior.

Christina Gremel, PhD
Christina Gremel is an assistant professor in the department of psychology and a member of the neurosciences graduate program at the University of California, San Diego. Her research focuses on the behavioral and neural bases of decision-making and their perturbations in diseases states, such as addiction. She earned her PhD from Oregon Health & Science University and did her postdoctoral training at NIH.
4 of 5 articles left
Login or Become a Member to unlock content
Training

Module 2B: Selection of Opsins

In this presentation, Vikaas Sohal will provide an overview of the “basic operating parameters” for optogenetic tools. Specifically, Sohal will:

After watching this presentation, you should be able to understand the critical considerations when selecting optogenetic tools.

Vikaas Sohal, MD, PhD
Vikaas Sohal is an associate professor in the department of psychiatry at the University of California, San Francisco. His lab studies circuits in the prefrontal cortex to understand how they generate emergent patterns of circuit activity, and how these patterns of activity contribute to normal cognition and the pathological behaviors associated with neuropsychiatric disorders such as schizophrenia and autism. Sohal earned his AB in applied mathematics from Harvard University, MA in mathematics from Cambridge University, and MD/PhD from Stanford University. He did his residency in psychiatry and a postdoctoral fellowship in the lab of Karl Deisseroth.
4 of 5 articles left
Login or Become a Member to unlock content
Training

In this presentation, Mario Penzo will describe the various strategies commonly employed for the delivery of bacterial opsins to the nervous system. Specifically, Penzo will:

After watching this presentation, you should be able to understand the pros and cons of the different opsin delivery methods.

Mario A. Penzo, PhD
Mario A. Penzo is the chief of the unit on the neurobiology of affective memory of NIH National Institute of Mental Health (NIMH). His group’s research aims to understand the neuronal mechanisms underlying the formation and regulation of affective memories. To do so, they combine various technical approaches, which include behavioral assays, electrophysiology, neuroanatomy, and optogenetics. Penzo obtained his PhD. at the Albert Einstein College of Medicine and completed his postdoctoral fellowship at Cold Spring Harbor Laboratory.
4 of 5 articles left
Login or Become a Member to unlock content
Training

Module 2D: Supporting Resources for Implementing Optogenetics in the Lab — Getting Started 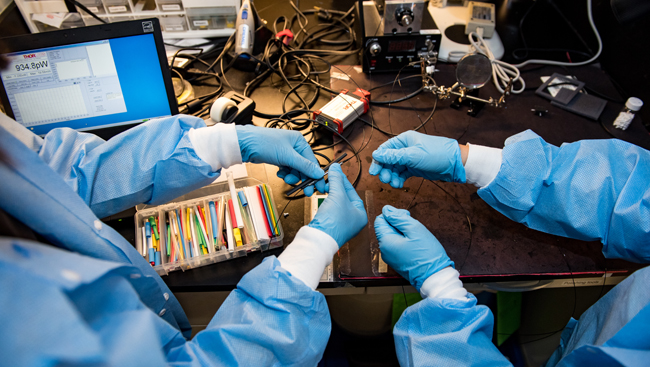 The articles below were selected by Christina Gremel, Vikaas Sohal, and Mario Penzo, faculty from Module 2 of SfN’s Optogenetics Training Series. These resources supplement their presentations, Implementing Optogenetics in the Lab: Why Use Optogenetic Methods, Selection of Opsins, and Delivery of Opsins.

Use these resources to understand when to choose optogenetics versus other approaches, pros and cons of different opsin delivery methods, and available sources of optogenetic tools.

Resources Related to Christina Gremel’s Presentation, Implementing Optogenetics in the Lab: Getting Started

In this 2011 article, Costa, Cohen, and Nicolelis demonstrate putative single neuron recordings in mice during behavior.

Causal Role for the Subthalamic Nucleus in Interrupting Behavior

Fife et al. demonstrate the use of an inhibitory opsin to test the necessity of a population of cells for a given behavior.

This 2015 report from Jennings et al. demonstrates the use of multiple methods, including chemogenetic and optogenetic activity tools, to examine the contribution of a specific cell-type to a given behavior.

Kvitsiani et al. reveal how optogenetic tagging can be used to examine the neural activity of an isolated cell type during a given behavior.

PINP: A New Method of Tagging Neuronal Populations for Identification During In Vivo Electrophysiological Recording

Lima et al. show how optogenetics can be used to tag neural activity in an identified neuronal population.

Self-Stimulation of the Brain

In this seminal paper from 1958, Olds reports using intra-cranial self-stimulation to identify a brain area that supports food seeking.

Owen, Berke, and Kreitzer provide a demonstration of combining methods, including cell-type-specific ablation, optogenetics, electrophysiology, imaging, and behavior, to modulate one cell population while recording the activity of a connected cell population.

In this 2017 review article, Peterson gives a comprehensive overview of in vivo whole cell recording methods.

Stuber and Wise review what optogenetics offers in the probing of behavior compared to other techniques.

This seminal 2007 paper from Zhang et al. presents halorhodopsin (NpHR), a complement to channelrhodopsin (ChR2), as a tool capable of generating a chloride flux when activated by light — thereby inducing rapid and reversible hyperpolarization.

Han and Boyden further characterize the halorhodopsin/channelrhodopsin system for multichannel photoinhibition and photostimulation of virally or transgenically targeted neural circuits.

In this 2009 article, Sohahl, Zhang, et al. use optogenetics to report evidence for the involvement of the specific activation of parvalbumin positive, fast-spiking interneurons in the production of cortical gamma oscillations.

Adesnick and Scanziani use a combination of optogenetics and electrophysiology to characterize the activity of horizontal projections between vertical domains of the mouse somatosensory cortex.

In this 2010 technical report, Gunaydin et al. describe a novel engineered opsin gene, ChETA, that overcomes many of the technical limitations of channelrhodopsin and allows for sustained spike trains up to at least 200 Hz.

Rajasethupathy et al. employ a variety of optogenetic approaches to identify a projection from the prefrontal cortex to the hippocampus which, when selectively activated, elicits memory retrieval.

Berndt and colleagues identify structural determinants of channelrhodopsin ion selectivity and use their parameters to engineer chloride-conducting channels with higher chloride conductivity and selectivity and test their efficacy in vivo.

You can purchase a stock viral vector from academic or non-profit viral vector cores. Alternatively, these cores will also develop custom viral vectors from a plasmid that you provide.

Viral vectors provide a powerful approach for transducing DNA into cells. Many factors must be considered when selecting the appropriate viral vector, including pathogenesis, target cell type, target expression levels, and the size of the genetic cargo.

The table below summarizes the primary factors to consider when making this selection for gene delivery. Table 1 is adapted with permission from AAV, Adenovirus and Lentivirus-Based Gene Delivery Handbook of Vigene Biosciences.

Adeno-associated viruses, or AAVs, are small, single-stranded DNA viruses that are non-pathogenic and can mediate long-term gene expression in vivo. Selecting the right serotype is critical for the success of gene delivery, as one must consider different tissue tropism, anterograde vs. retrograde expression, and other factors.

Promoters allow for selective expression in viral vectors in different tissues or different brain cells (neurons versus astrocytes) based on gene expression.

The table below, adapted with permission from the AAV, Adenovirus and Lentivirus-Based Gene Delivery Handbook of Vigene Biosciences, lists different promoters that are compatible AAVs and often used in neuroscience experiments.

In this 2017 paper, Wang et al. present a noninvasive, ultrasound-based technique to introduce optogenetic channels into the brain by temporarily opening the blood-brain barrier.

Analysis of Transduction Efficiency, Tropism and Axonal Transport of AAV Serotypes 1, 2, 5, 6, 8, and 9 in the Mouse Brain

Here, Aschauer, Kreuz, and Rumpel provide a detailed and quantitative analysis of the transduction profiles of rAAV vectors based on six of the most commonly used serotypes (AAV1, AAV2, AAV5, AAV6, AAV8, and AAV9) that allows systematic comparison and selection of the optimal vector for a specific application.

Zalocusky et al. report how using a D2 specific promoter enables genetic access to D2R-expressing cells in the rat striatum to exert optogenetic control during decision-making and reveal a causal effect of these cells in driving risk-preference.

A Direct GABAergic Output From the Basal Ganglia to Frontal Cortex

This 2015 paper from Saunders et al. provides an example of using a transgenic mouse line to drive channelrhodopsin-2 expression. The authors use this approach to identify a direct, GABAergic projection from the basal ganglia to frontal regions of the cerebral cortex.

In this 2013 article, Li, Penzo et al. use a combination of viral vector transduction with a transgenic, Cre-expressing mouse line to express channelrhodopsin-2 or archaerhodopsin and demonstrate robust fear conditioning-induced synaptic plasticity in the central amygdala.

Complete this short survey to provide valuable feedback about Module 2 to SfN and the series faculty.