Understanding Gene Expression and Physiology Together 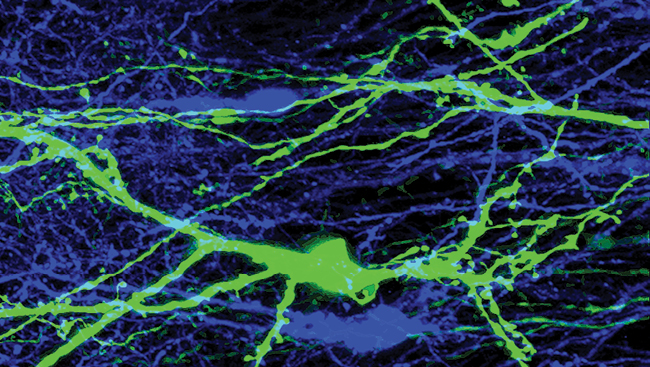 In the quest to understand the brain, gathering information about the ways neurons communicate is essential. Coupling cell type analysis with electrophysiological measurements obtained through patch-clamping, a host of techniques that measure electrical activity in neurons, has the potential to reveal new insights about how specific neuronal cell types communicate, and thus how the brain works.

In the past, scientists have used a variety of methods to identify cells in the brain. Morphological analyses are powerful and common.

One recent study employed a combination of morphology and electrophysiology to distinguish 15 different types of interneurons in the mouse visual cortex. Single-cell RNA sequencing is also a powerful cell identification technique, but researchers have run into problems reconciling genetic profiles of cells with their morphological characteristics.

In order to address these challenges, a research team developed Patch-seq, which couples whole-cell patch-clamp recordings and single-cell RNA sequencing. The team generated electrophysiological measurements in brain slices from the mouse cortex and designed a database to accurately predict neuron morphology based on these measurements of electrical activity.

After generating this database, the research team patched and recorded either in slices or in vivo. Just after patching, they removed the cell contents with the same pipette and extracted RNA for sequencing. The researchers identified about 7,000 genes from each interneuron, which is consistent with results from other single-cell sequencing methods.

The scientists next independently analyzed their data using gene expression, morphology, and physiology, and found that they could consistently assign cell-type using any of these measurements. The researchers could also predict some, but not all, aspects of electrical activity of the cells and could also accurately predict cell type using transcriptome information.

This finding suggests that transcriptomes from cells in slices are an accurate reflection of the gene expression profiles in cells in the brains of organisms. The researchers also made full use of the unbiased nature of single-cell RNA sequencing in their study and identified new genetic markers to distinguish two morphological cell types in the mouse cortex.

Patch-seq has the potential to generate greater understanding, not just of neuronal connectivity, but also of human disease.

For instance, genome studies have highlighted many genes that could play a role in complex disorders like schizophrenia and depression. A technique like Patch-seq that assesses electrical activity and transcriptome dynamics in the same cell could help scientists evaluate the contributions that genes make to function on the single-cell level.

Indeed, in the current study, the authors showed that several genes that have been linked to disease were differentially expressed in two types of interneurons.

Understanding more about the cells that express disease-associated genes may generate further insight into the specific circuits and brain regions that play a role in disease.

The kind of information that can be gained from Patch-seq could also help to develop better cell therapies and to inspire new questions in neuroscience.

Knowing the gene expression profiles, morphology, and physiology of individual cells could help researchers that want reprogram pluripotent stem cells into neurons, which could then be used in treating neurological disorders.

Finally, scientists can use this technique in any brain region or disease model to determine in an unbiased way which genes are involved and how affected cell types function physiologically.