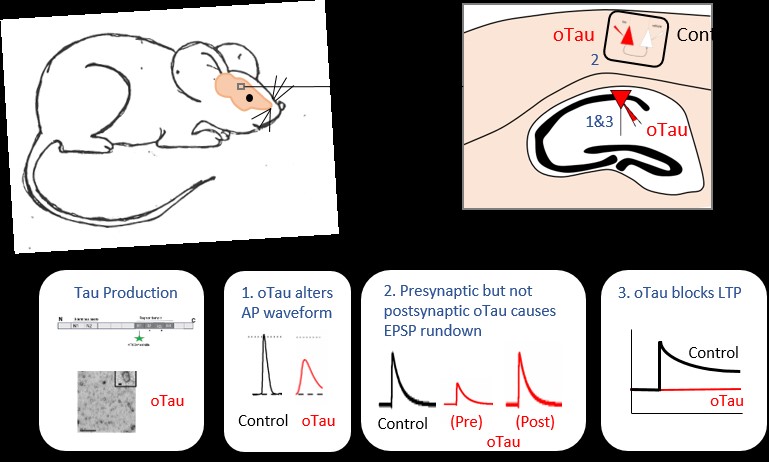 This project aimed to determine:

What are the early cellular changes produced by tau oligomers introduced into single healthy cortical neurons?

Do tau oligomers have effects on the communication between neurons and the synaptic plasticity, a process involved in learning and memory?

Microtubules provide stability and structure to cells such as neurons. Tau is a protein that normally binds to microtubules and influences their properties. In some disease states, such as Alzheimer’s disease, tau is modified and unbinds from the microtubules. These now free tau molecules can link together to form short chains or oligomers. Tau oligomers appear to be toxic to neurons, although their precise effects are not fully defined.

To understand how these tau oligomers affect neurons, we have introduced structurally defined tau oligomers into single healthy neurons. This has allowed us to map precisely how tau oligomers modify neuronal properties and relate this to the concentration introduced into the neurons and the time of exposure. We can then define the effects of tau oligomers that may contribute to the pathology early in Alzheimer’s disease.

Wild-type full-length human tau-441 was expressed in Escherichia coli, purified, labeled, and made into oligomers. The oligomers were then structurally characterised. In vitro electrophysiology (whole-cell patch clamp recording) in mouse brain slices, together with detailed quantitative analyses, was used to fully characterize the effects of introducing tau oligomers directly into cortical neurons via the recording electrode. As a control we used tau that existed as single molecules (monomers).

Effects on single cells and action potential dynamics were examined in CA1 neurons in the hippocampus. Recordings from synaptically connected cells were used to examine effects on synaptic transmission. Tau oligomers were either introduced into the presynaptic cell or the postsynaptic cell and then the effects on synaptic communication measured. Such targeting was not possible in previous studies where tau oligomers were applied in the extracellular solution or overexpressed.

The introduction of low (nanomolar) concentrations of tau oligomers into single hippocampal or neocortical pyramidal neurons caused marked changes to action potential kinetics over a 45- to 50-minute timeframe. Action potential amplitude, rate of rise, and rate of decay were all reduced, and half-width was increased. This was accompanied by changes to the resistance of the neurons and firing rate at late timepoints.

Using recordings between synaptically connected neurons in the neocortex, we targeted the tau oligomers into either the pre- or the postsynaptic cell. We could therefore dissect differing effects depending on the location of the tau oligomers. When the tau oligomers were introduced into the presynaptic cell, basal synaptic transmission was impaired, especially at high frequencies.

In contrast, when tau oligomers were introduced into the postsynaptic cell, no effect was observed on synaptic transmission. However, postsynaptic tau oligomers did significantly impair long-term potentiation, which is a form of synaptic plasticity that is thought to underlie some forms of learning and memory.

Finally, fluorescently labelled tau oligomers that were introduced into the cell body of neurons could be visualized at synaptic sites on the distal dendrites, consistent with the synaptic dysfunction phenotypes observed.

Our study is the first to introduce structurally defined oligomeric tau directly into neurons via the patch pipette to study their early effects.

We have demonstrated direct effects of tau oligomers on action potential waveforms as well as shown impairments in synaptic transmission and plasticity. One of our most exciting findings was the confirmation that the tau oligomers could mislocalize to distal synapses over a short time frame. This is of importance given that synapses are the sites of neuronal communication.

The impairment of synaptic plasticity is also of great interest, as this is one of the processes thought to underlie memory formation. These effects could occur with the low concentrations of oligomeric tau that may be present at early time points of disease.

In line with previous studies, no detrimental effects were observed with the introduction of monomeric forms of tau. Thus, preventing tau from oligomerizing could be a potential therapeutic approach in many forms of dementia including Alzheimer's disease.