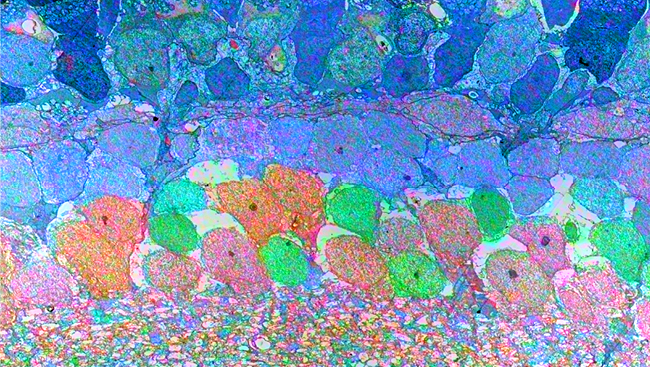 Spinocerebellar ataxia type 6 (SCA6) is a rare neurological disorder that typically manifests at mid-life and leads to progressive gait abnormalities. SCA6 is caused by a mutation in the CACNA1A gene that encodes the P/Q-type calcium channel. The P/Q channel is richly expressed in the cerebellum, the “little brain” at the base of the brain that is involved in motor coordination and motor learning. Purkinje cells are the principal cells of the cerebellum and are essential for its proper functioning. We know from postmortem studies that Purkinje cells undergo degeneration in SCA6, which may underlie symptoms of ataxia, or loss of motor control.

Many genes normally contain a triplet repeat that encode a repeating sequence of the amino acid glutamine, a poly-glutamine tract. Several neurodegenerative diseases, including SCA6, arise due to a mutation that causes an expansion of poly-glutamine tracts. Although longer repeats tend to cause earlier onset of SCA6, this can only partially explain the wide variability (even decades) observed in the age of onset of SCA6 patients.

We use a mouse model of SCA6 containing an 84-glutamine tract (referred to here as SCA6 mice) to recapitulate the disease symptoms within the short life span of mice. Previous study showed that SCA6 mice with two copies of the mutated gene have motor coordination problems at seven months of age (around 40 years of age in humans), reminiscent of the midlife-onset of SCA6 in people, whereas SCA6 mice with one disease gene copy have symptoms at 19 months.

We used a barrage of different motor assays, reasoning that subtle motor changes may be observed earlier with some, but perhaps not all, assays, as has been demonstrated for other motor control diseases. We measured motor performance across several ages in SCA6 mice and their normal siblings that do not contain the mutated gene.

In all three assays, SCA6 mice exhibited normal motor performance up to and including six months of age. However, we observed motor coordination problems at seven months of age using all three assays. These results show that onset of motor problems in SCA6 mice is rapid, occurring between six and seven months, and that the separate assays used in this study have similar power to detect motor problems in these mice. Our findings suggest that less variability is observed in the age of onset in our SCA6 mice than observed in human patients.

We also tested for gait abnormalities in SCA6 mice. Surprisingly, we found no detectable gait problems at seven months, when motor coordination deficits were observed with the other assays. Nor were gait abnormalities observed at older ages, after motor coordination problems worsened at one and two years old. These results suggest that the SCA6 mouse model does not perfectly recapitulate all symptoms observed in human SCA6 patients, perhaps because to some degree, gait in quadrupedal animals is different than in bipedal animals, although gait abnormalities can be seen in mouse models of other forms of ataxia.

Given that cerebellar Purkinje cell death is observed postmortem in human SCA6 cerebellum, we wondered whether cell death contributed to motor problems in SCA6 mice. We observed no changes in the number or size of Purkinje cells at seven months. However, the Purkinje cells were misshapen and fewer in number in two-year-old SCA6 mice, suggesting that Purkinje cell death occurs only in advanced stages of SCA6. This finding demonstrates that SCA6 mice recapitulate a key feature of the human disease — Purkinje cell death —  but suggests that cell death likely contributes to motor deficits only at late stages of the disease. Since the P/Q channel protein normally encoded by the SCA6 gene is found in other regions of the brain beyond the cerebellum, including the striatum, a region also involved in motor coordination, we wondered whether striatal cell degeneration might contribute to earlier behavioral deficits in the SCA6 mice. We found no neuronal loss in the striatum in seven-month-old SCA6 mice, further reiterating that neurodegeneration is not contributing to motor dysfunctions observed at earlier stages of the disease.

Our data show that a careful analysis of behavioral assays can reveal some surprising insights into animal models of disease. The absence of gait, even at the advanced stages of SCA6, shows that not all disease symptoms may be faithfully recapitulated in a mouse model. However, motor coordination problems, a key feature of SCA6, were robustly observed in these animals.

Another important finding from our study was that SCA6 mice display little variability in the age of onset of motor problems, which is different from what is observed in human patients. A possible explanation is the limited genetic and environmental variability in SCA6 mice in comparison to human patients. We suggest that further studies, for example examining the effects of environment on disease onset or severity in SCA6 mice, would be useful and may reveal novel factors and therapeutic avenues influencing SCA6 presentation in humans.

Sriram Jayabal
Sriram Jayabal is a fifth year PhD student in the Integrated Program in Neuroscience at McGill University, working in the Watt lab.
﻿