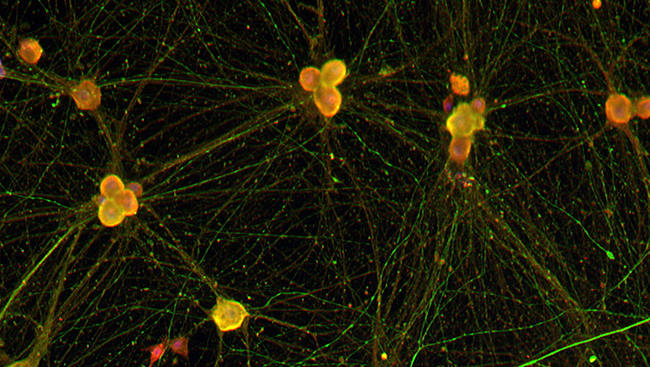 Discovering what cells give rise to others — in other words, tracing cell lineage — has been a goal of biologists for years.

Early efforts involved injection of dye into a small area of a developing embryo. Modern approaches can include labeling with retroviral libraries or fluorescent proteins, and recent advances allow for much finer resolution, and thus greater understanding of cellular relationships. Many strategies are prospective, meaning scientists label one cell and then trace its descendants by following the label.

One of the most common prospective techniques involves the use of a retroviral library, which often contain a transgene like β-galactosidase or GFP and unique DNA barcodes.

Retroviruses integrate recombinant DNA into the genomes of cells of interest, whose progeny then contain that DNA and can therefore be traced, both genetically and via microscopy of included labels. In sparse retroviral labeling, researchers use low levels of virus to ensure that only a few progenitor cells are infected.

The technique is limited in that recombinant DNA can only be inherited if the infected cell divides. Furthermore, retroviruses can be silenced and it can be difficult to assess single cells for barcodes. Advances that combine RNA-sequencing and retroviral labeling help overcome some of these challenges, and this strategy remains powerful.

One pitfall of this technique is that plasmid DNA does not integrate into the host cell genome, which can lead to loss of the plasmid. Scientists have addressed this pitfall using transposons — special DNA sequences that incorporate the reporter into host DNA. One transposon, called PiggyBac, has substantial cargo capability and can be used along with multiple fluorescent reporters to follow several lineages in one experiment. But transposon insertion number and location is random, which might induce genetic mutations in target cells.

Another commonly used strategy is genetic recombination, in which an enzyme recognizes specific DNA sequences and recombines them.

The Cre-loxP system is named for the enzyme Cre recombinase and the sites it recognizes, called loxP sites. To use this system, researchers cross two different mouse lines: one expressing Cre under the control of a tissue specific or inducible promoter and one with a reporter gene like GFP preceded by a stop codon flanked by loxP sites. If Cre is induced in a cell, the enzyme recombines the loxP sites and removes the stop codon, which allows the reporter to be expressed. Scientists can identify fluorescent cells and infer their lineage based upon the timing of Cre induction.

Newer approaches like Brainbow involve multiple fluorescent reporters used in combination to generate many different colors, each of which labels one cell lineage.

Technological advances have not only improved existing prospective methods, but also led to new approaches.

For instance, scientists have used microfluidics to capture progenitor cells and follow their lineage for several generations with both time-lapse imaging and antibody labeling. Lineage tracing using genome editing technology is another recent development. One method employs barcodes that contain multiple CRISPR/Cas9 target sites, which gradually accumulate mutations as cells divide. Researchers sequence these sites, and extrapolate cell lineage based upon which mutations are shared.

In retrospective lineage tracing, scientists examine the genomes of single cells for naturally occurring mutations and compare them to deduce cell heredity.

This strategy, too, developed fairly recently based upon improvements in single-cell genome sequencing that have allowed researchers to compare the genomes of individual cells at high resolution.

Scientists use several types of genetic variants for lineage tracing: retrotransposons, single nucleotide variants, and microsatellites. Mutations in these genomic regions have been predicted to carry enough information to reveal the familial relationships of all the cells in an organism.

Retrospective methods represent a different, but no less valuable, approach and one that is especially valuable in the examination of human cells and tissues.

Scientists now have their choice of powerful strategies, which will continue to give them a highly detailed look into the familial relationships of cells in circuits, tissues, and organisms of interest.