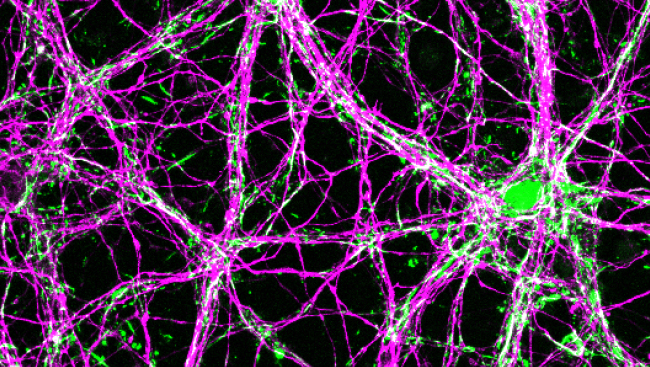 Pericytes are cells with elaborate processes that adorn capillaries throughout the brain.

They are a key component of the neurovascular unit (NVU) and control numerous vascular functions, including the development and maintenance of the blood-brain barrier (BBB). Their continuous signaling with endothelial cells regulates formation of normal tight junctions.

A deficiency in the number of pericytes, induced by the genetic disruption of platelet derived growth factor (PDGF) signaling with its β-receptor, results in a malformed BBB, plasma leakage, microaneurysms, and embryonic lethality.

A partial loss of PDGFRβ signaling allows mice to survive into adulthood, but gradual accrual of BBB impairments leads to progressive neural dysfunction by 12-18 months of age.

So far, pioneering studies on pericytes have used genetic manipulation to understand the consequence of pericyte malfunction at birth. However, we still possess a limited understanding of how normally developed pericytes in the adult brain function and respond to pathological changes, such as ischemic stroke.

Matrix metalloproteinases (MMP) have been demonstrated to be important mediators of BBB degeneration in various pathological conditions, including stroke.

These proteolytic enzymes come in 24 isoforms (in the mouse) but can be grouped into different classes, including collagenases, stromelysins, gelatinases, and others.

Gelatinases, which consist of the isoforms MMP-2 and MMP-9, have been demonstrated to be involved in stroke and ischemia in various ways.

In particular, activation of gelatinases in early stages of stroke leads to breakdown of the BBB, which worsens neuronal damage and limits the utility of thrombolytic (blood-clot removing) treatments.

For example, in mice lacking MMP-9, the severity of BBB leakage and the size of the stroke is greatly reduced. Furthermore, a variety of inhibitors targeting gelatinases have a similar protective effect in animal models of stroke.

In our study, we aimed to determine whether gelatinase activity induced by ischemia was truly associated with pericytes in vivo and whether this activity was involved in rapid BBB damage.

To examine how pericytes responded to ischemia in the intact brain of adult mice, we imaged mice with fluorescently labeled pericytes using two-photon laser scanning microscopy (TPLSM). This imaging approach enabled direct visualization of brain vasculature at the level of individual capillaries.

Cerebral pericytes were labeled by expressing a fluorescent protein, Tdtomato, with the PDGFRβ promotor, allowing the fluorescent marker to be expressed in nearly all pericytes. To allow direct visualization of the brain surface, cranial imaging windows were generated in the skull and sealed with a cover glass.

With the addition of other fluorescent probes to label the blood serum and to track the activity of matrix-metalloproteinases, we were poised to gather dynamic spatiotemporal information about pericyte response to ischemia in vivo.

We induced micro-strokes through a cranial imaging window using photothrombosis.

Photothrombotic occlusions were produced by introducing a photosensitive dye called Rose Bengal into the blood stream, and using focused green laser light to activate the dye within the capillary bed.

Activation of Rose Bengal leads to local production of oxidative free radicals that irritate the endothelium and initiate a clotting response.

Following the production of a micro-occlusion in the capillary bed, we observed isolated regions of BBB breakdown.

These localized sites of leakage increased in number over three hours of imaging and appeared after complete loss of flow within the capillary lumen.

A critical feature of BBB leakage was its location.

To further investigate the role of MMPs in pericyte responses to ischemia and to determine the specific isoform of MMP involved, we used FITC-Gelatin, a probe that allows for the tracking of matrix metalloproteinase 2/9 (MMP) activity. This probe is normally not very fluorescent, but when cleaved by gelatinases, its fluorescence increases dramatically.

FITC-Gelatin was injected by itself or in combination with specific inhibitors for MMP-2 and MMP-9 isoforms directly into mouse cortex.

When tracking the activation of gelatinase activity after capillary occlusion, we observed a strong overlap between pericyte somata and increases in FITC-Gelatin fluorescence within tens of minutes following occlusions.

Other cells with heightened FITC-Gelatin activation were also seen in the parenchyma, but these cells were not associated with leakage events.

With the application of an MMP-9 inhibitor, pericyte-specific leakage sites were significantly reduced, while co-injection of an MMP-2 inhibitor had comparatively no effect.

Our study provides new insight into the well-studied role of MMPs during acute stroke.

First, the activation of MMP-9 is remarkably rapid, with increases at the capillary wall seen within tens of minutes after vessel occlusion.

Second, the somata of pericytes seem to be a hot-spot for MMP-9 activation, suggesting that pericytes themselves express high levels of MMP-9 and tightly control its activity under normal brain conditions.

Our results highlight the importance of using in vivo imaging techniques to visualize changes that are often difficult to detect with conventional biochemical approaches on extracted tissues.

In addition, our findings highlight pericytes as a potential cellular target for future stroke therapies.

Priorities for future research include identifying mechanistic details of how pericytes activate MMPs and whether this process can be mitigated in a way that does not disrupt the salutary functions of MMPs in recovery after stroke.

Robert Underly, PhD
Robert Underly is a PhD candidate at the Medical University of South Carolina in the lab of Andy Shih, an expert in in vivo two-photon imaging.
﻿