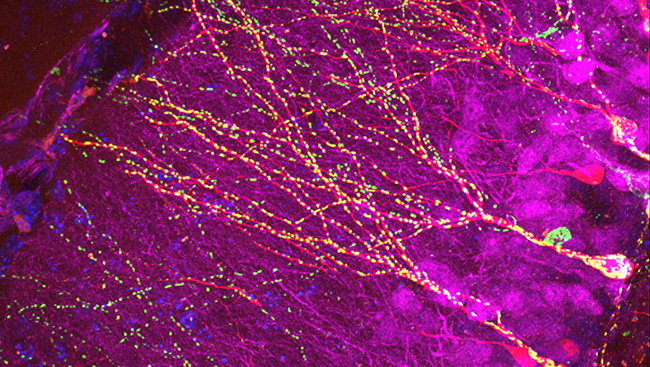 Material below summarizes the article Acetylcholine Acts Through Nicotinic Receptors to Enhance the Firing Rate of a Subset of Hypocretin Neurons in the Mouse Hypothalamus Through Distinct Presynaptic and Postsynaptic Mechanisms, published on February 28, 2015, in eNeuro and authored by Wenliang Zhou, Zio-Bing Gao, and Marina R. Picciotto.

The primary component of tobacco driving addiction is nicotine. Nicotine exerts its effects through a class of membrane proteins throughout the brain and body called nicotinic acetylcholine receptors (nAChRs). These receptors are normally activated by the neurotransmitter acetylcholine, but are hijacked by the nicotine in tobacco. nAChRs are found widely throughout the brain. Nicotine and acetylcholine can activate nAChRs and increase the activity of neurons expressing these receptors. This provides a molecular basis for nicotine to exert multiple biological effects, and ultimately can lead to nicotine dependence. Hypocretin, or orexin, neurons are a small group of neurons with many important functions, including controlling circadian rhythms regulating appetite, and feeding behavior; contributing to arousal, motivation, and emotions; and modulating drug addiction. Many of these behaviors are also modulated by nicotine exposure.

Until recently, however, we had little knowledge about whether nAChRs are present in hypocretin neurons and how nicotine affects the activities of hypocretin neurons. Understanding how nAChRs influence hypocretin function could also provide important information on the role of these neurons in the behavioral effects of nicotine.

In this study, we started by using nicotine or acetylcholine, the endogenous neurotransmitter that binds to, and activates, nAChRs, to stimulate these receptors. We used electrophysiological tools to identify nAChRs in hypocretin neurons and on axon terminals that project onto hypocretin neurons. We first employed synaptic blockers to disconnect neuron-to-neuron communication. We then used a glass pipette to record from hypocretin neurons (tagged with a fluorescent protein, GFP, for identification) and recorded electric currents going through the membrane. We applied acetylcholine onto the neuron and monitored the change in electrical activity. We found that around one third of hypocretin neurons respond to acetylcholine acting through nAChRs with an increased firing rate.

In sharp contrast, when we removed synaptic blockers, acetylcholine suppressed activity of hypocretin neurons. This was seen as a reduction in the frequency of miniature excitatory postsynaptic currents (mEPSCs), a marker of synaptic transmission efficiency. Direct silencing of nAChRs by the receptor blocker mecamylamine also suppressed mEPSCs, suggesting that normally, nAChRs might be required for maintaining functional synapses onto hypocretin neurons, and blockade of these receptors or application of acetylcholine could disrupt this ability. This finding was consistent with the function of nAChRs, which are briefly activated, but then persistently desensitized, or turned off, by acetylcholine or nicotine binding.

To identify the mechanism for how disruption of nAChR signaling could decrease synaptic transmission, we used two blockers of intracellular calcium signaling to decrease known pathways contributing to synaptic function. Application of these two blockers reduced the number of mEPSCs to the same degree as nicotine or acetylcholine and completely eliminated the ability of nicotine and acetylcholine to decrease mEPSCs. These results suggest that nAChRs may normally contribute to synaptic function by activating these intracellular calcium signaling pathways.

Based on these findings, we hypothesize that nAChRs are present in the vast majority of excitatory axon terminals (those that use the neurotransmitter glutamate) that make contact with hypocretin neurons. We hypothesize that there is tonic release of acetylcholine onto these receptors, which activates them at a low level, triggering the opening of internal calcium stores in the endoplasmic reticulum and providing calcium sparkles that contribute to “spontaneous” neurotransmission. During behavioral events that increase attention and arousal, a high level of acetylcholine can be released, which briefly activates but then desensitizes nAChRs and disrupts tonic signaling, reducing glutamatergic input to the overall population of hypocretin neurons. A similar effect would be exerted by nicotine delivered through tobacco smoke. Meanwhile, this acetylcholine release or nicotine delivery would enhance the firing of about one-third of hypocretin neurons through postsynaptic nAChRs. We propose that this mechanism could enhance the signal-to-noise ratio of the electrical response to nicotine or acetylcholine in the subset of neurons that express nAChRs.

These results revealed the differential activity of nAChRs postsynaptically in the hypocretin neurons and presynaptically in the glutamatergic axon terminals, which could enhance the signal-to-noise ratio of electrical activity in hypocretin neurons in response to phasic acetylcholine release or smoked nicotine. These results have implications for tobacco use.

Wenliang Zhou, PhD
Wenliang Zhou received his PhD from the University of Connecticut in the laboratory of Srdjan Antic and is currently a postdoctoral fellow at Yale University in Marina Picciotto’s laboratory.
﻿