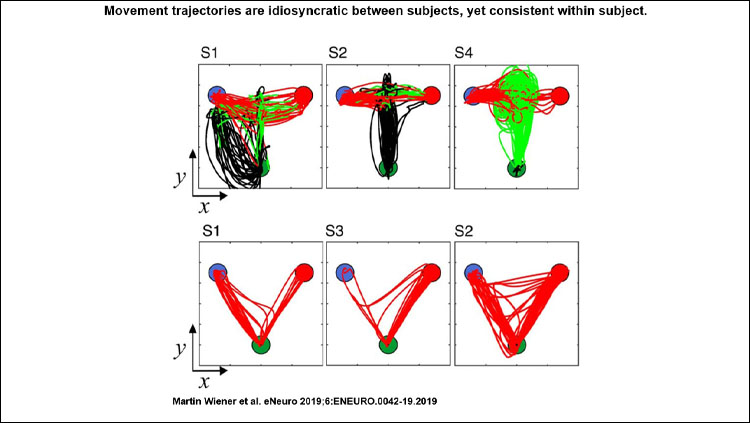 Material below summarizes the article Movement Improves the Quality of Temporal Perception and Decision-Making, published on August 8, 2019, in eNeuro and authored by Martin Wiener, Weiwei Zhou, Farah Bader, and Wilsaan M. Joiner.

How does the motor system encode and process time during a reaching task?

Movement has been known to alter our perception of time. Past research shows that sustained movement dilates perceived time durations and that the movement length, trajectory, direction, and speed also influence temporal processing.

In cases of sensory adaptation, the motor system can rectify a distorted time duration via recalibration.  With this evidence, we sought to further assess the role of the motor system in timing and ascertain whether it also enhances time perception.

Auditory tones played while forty human participants performed a reaching task using a robotic manipulandum, an instrument used in human motor control research for spatial movement across a flat surface. Singly presented tones were classified as long or short duration by moving the manipulandum to the right or left targets. The hand position was obstructed from view to minimize hand and upper limb position feedback.

Participants were either restrained from making any movement before the offset of the stimuli (the hold condition) or were permitted to move. Ten additional participants performed a temporal reproduction task with the same auditory stimuli. During the estimation stage, intervals were encoded, and during the reproduction phase, intervals durations were re-created with the robotic manipulandum through hand movements for the entirety of the duration.

The objective was to match the encoded duration with the reproduced duration. Participants could either freely move or were restricted from movement during the encoding phase

Participants in the free-movement group were less variable and more precise in their time perception than the hold group, as indicated by a lower coefficient of variation (CV) in both the temporal bisection and temporal reproduction tasks. To demonstrate that this was not due to the proximity to the targets, additional participants were tested in the hold condition with two different start locations. No differences were observed in the CV. Reaction times were similar between the two groups — under two seconds — but the free-range group rapidly increased speeds after two seconds had elapsed.

Distinct patterns emerged in the free-range trajectories: circular paths, up and down movements, and a tendency to keep the cursor in the middle during the warm-up period. Overall, no significant correlation was found between path length and CV. However, when path length was also assessed with regard to choice, longer path lengths corresponded with an increased tendency to select “long” to describe the tone duration.

We examined the movement lengths to the targets in the free-range groups. Distances were larger for longer durations and shorter for short durations. In the hold condition, the force exerted on the robotic arm was exerted towards the short duration target and shifted to the long duration target as the durations increased. Examining the movement trajectories for both the hold and free-range condition revealed more movement variability in the trials as durations became longer for the free-range but an opposite pattern for the hold condition. However, the restrained group had greater movement variability overall.

Generally, the findings demonstrate that movement improves time perception by increasing temporal precision and reducing bias. This advantage is amplified when participants are allowed to move as durations are encoded, likely stemming from added opportunities to practice the interval duration through movement and to sample and explore the environment before making a choice. Without the privilege of exploration, the restrained group spends this energy on devising two competing action plans for short and long duration selection.

By showing how timing plays a role in finely coordinated motor activity of limb movements and interactions with the environment, this study deepens our understanding of the intersections in human motor control and time perception. Future research may apply a brain stimulation technique such as transcranial magnetic stimulation to initially disrupt a timing-related or motor region, possibly at a frequency implicated in movement (beta oscillation), and then observe the effects on a similar reaching task.

Farah Bader
Farah Bader is a fourth-year PhD student in the interdisciplinary program in neuroscience at George Mason University. She is interested in the alterations in timing perception in traumatic brain injury victims compared to those in healthy human subjects, as well as electrophysiological indices of time perception and learning.
﻿