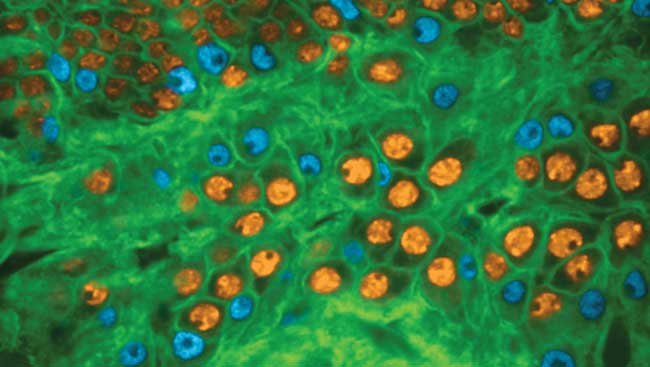 Brain rhythms, produced by the synchronized electrical activity of millions of neurons, are ubiquitous throughout the mammalian brain. Rhythmic — or oscillatory — activities can be detected using direct recordings in animals and electroencephalographic (EEG) recordings in humans and are seen across the brain at frequencies from less than one hertz to over 100 hertz.

One of the long-standing quests of neuroscience is to unravel the mechanisms underlying the brain’s rhythmic activities and their functional importance. A growing body of evidence suggests that they are a mechanism for communication both within (at higher frequencies) and between (at lower frequencies) brain areas. They have therefore been postulated to play a vital role in cognitive and sensorimotor functions, such as memory, learning, and movement control.

In the primary motor cortex — the seat of the brain’s movement control system — the prominent rhythmic activity detected at rest is within the beta frequency band (in the 15−30 hertz range, most prominently at about 20 hertz). As we prepare and execute a movement, beta activity desynchronizes, while a faster brain rhythm, in the range of around 30−80 hertz known as gamma rhythm, becomes stronger.

Abnormalities in brain activity at these frequencies have been linked to certain brain disorders, such as Parkinson’s disease and schizophrenia. For example, enhanced beta activity has been linked to motor impairment in Parkinson’s disease. Since the mechanisms underlying these rhythmic activities are still not fully understood, further research in this field is critical to improve our understanding of motor control and open new possibilities for potential therapies in disorders characterized by abnormal neuronal synchronization.

One of the most popular ways to study brain rhythms is to drive oscillatory activity in vivo by directly stimulating neuronal elements with external rhythmic stimulation and to study the resulting changes in brain physiology and behavior. In humans, it is more difficult to drive oscillations, but in recent years a type of non-invasive stimulation involving the application of weak alternating current through the scalp (transcranial alternating current stimulation — tACS) has been suggested as a potential method.

In our study, we applied tACS at beta and gamma frequencies to the motor cortex of young healthy participants while simultaneously performing transcranial magnetic stimulation (TMS), a powerful tool that can be used to measure the physiological changes in the human brain.

Driving rhythmic activity in the gamma range reduced local inhibition mediated by GABAA neurotransmitter receptors in the motor cortex at rest. This finding was in line with increasing convergent evidence from animal studies and biophysical models, which suggest that gamma oscillations primarily result from activity within GABAergic interneurons.

However, this result does not necessarily mean that gamma tACS applied to the brain at rest is capable of engaging the relevant inhibitory circuits involved in movement-related gamma synchronization. If gamma tACS does drive activity within the circuits that are responsible for gamma oscillations, then we predicted that the decrease in inhibition during gamma tACS should be related to the decrease in inhibition during the period when endogenous gamma oscillations increase.

To address this prediction, we looked to relate the magnitude of the tACS-induced decrease in GABA-ergic inhibition with the magnitude of movement-related decreases in inhibition measured in the absence of tACS. We demonstrated a significant relationship between these periods of exogenous and endogenous increases in gamma oscillations, suggesting that tACS may be recruiting endogenous gamma circuits.

The next question we wanted to address was whether the physiological changes induced by driving motor gamma rhythms were behaviorally meaningful. We examined the relationship between gamma tACS-induced change in GABAA inhibition and an individual’s performance in a motor learning task performed on a separate day. A striking correlation between these two measures emerged, suggesting that the specific inhibitory circuits involved in the movement-related gamma rhythms may also be important in the motor learning in humans.

The external manipulation of specific brain rhythms offers a unique opportunity to study where they come from and what they do and also holds promise in brain disorders characterized by abnormal rhythmic activity.

Magdalena Nowak is a DPhil candidate at The Nuffield Department of Clinical Neurosciences at University of Oxford. Her work focuses on non-invasive brain stimulation and the mechanisms underlying rhythmic brain activities and their functional significance in healthy and clinical populations.

Magdalena Nowak
Magdalena Nowak is a DPhil candidate at The Nuffield Department of Clinical Neurosciences at the University of Oxford.
﻿