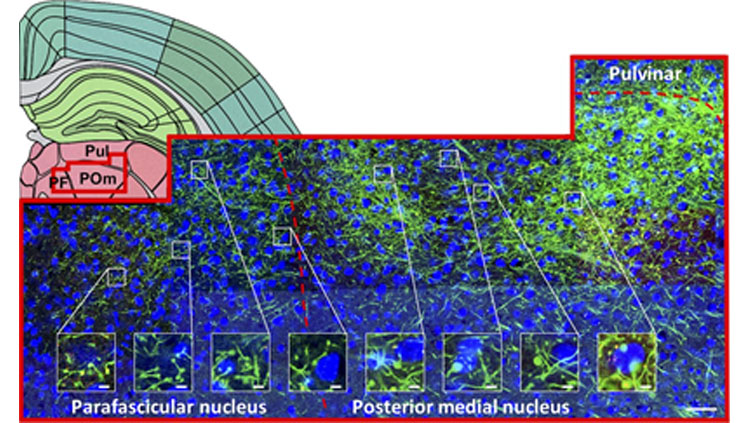 Material below summarizes the article Layer 5 Corticofugal Projections from Diverse Cortical Areas: Variations on a Pattern of Thalamic and Extrathalamic Targets, published on July 22, 2020, in JNeurosci and authored by Judy A. Prasad, Briana J. Carroll and S. Murray Sherman

Through what subcortical targets does the cerebral cortex implement its effects on behavior and cognition?

Neural computations executed within the neocortex impact behavior and cognition. However, because the neocortex is an evolutionarily recent structure lacking an anatomical substrate to directly influence muscle fibers, behavioral impacts must occur via the subcortical structures it overlays. Corticofugal pathways to the subcortex arise from a neuronal subpopulation in layer 5 of the cortex, which targets brainstem motor areas. These neurons also project to the thalamus, presumably carrying correlates to keep the forebrain informed of motor commands.

However, comprehensive studies of layer 5’s specific subcortical targets have been limited to a few primary cortical areas (i.e., visual and somatosensory cortex). We sought to identify a common motif across these and other cortical areas.

Because the cortex is composed of discrete functional areas, we further hypothesized that different cortical areas exhibited some variations on the pattern of layer 5 projections. To test this, we examined the subcortical targets of layer 5 across a variety of cortical areas (sensory, motor, and prefrontal).

To assess the generalizability of these projections, we injected a viral Cre-dependent, fluorescent anterograde tracer in transgenic adult mice with Cre-expressing neurons in layer 5 of the neocortex. We used microscopy to qualitatively examine the subcortical distributions of terminals arising from layer 5 of the primary visual, primary somatosensory, primary motor, and ventromedial orbitofrontal cortex (four injected groups).

Two investigators independently identified these targets within each injected group before reconciling results to verify consistent targets (i.e., observed labelling within more than 50% of subjects within each group).

Large terminals on target neurons suggest stronger synaptic transmission, so we examined terminal size in a subset of corticofugal pathways. We captured one high-power photomicrograph per animal within the terminal field at the cortical target and then applied to this photomicrograph an automated method to identify and size terminals. For each pathway, we used an ANOVA to compare average terminal size by animal to classically defined large and small terminal sizes, correcting for multiple comparisons. Additionally, we used a mixed model to test whether cortical area and target structure were reliable predictors of average terminal size. Considering that terminal morphology is typically associated with function, this analysis enabled a greater understanding of the nature of synaptic transmission in previously unexplored pathways.

Regardless of cortical origin, layer 5 reliably projects to a number of subcortical regions. These include the thalamic central lateral and reticular nuclei, and also extra-thalamic regions, such as the zona incerta, dorsal striatum, pontine gray, and periaqueductal gray. In such instances that more than one cortical area converged on a given target, we often observed terminals localized in distinct subregions; such topography was evident in the dorsal striatum and thalamic reticular nucleus, for example.

Some variation on the pattern of layer 5 targets was observed between cortical areas. For each cortical area, some unique targets were observed, such as for ventromedial orbital prefrontal cortex projections to the submedial nucleus and lateral hypothalamus (targets that received no input from primary somatosensory, visual, or motor cortex). Similarly, the primary visual cortex projected to the lateral geniculate nuclei and intergeniculate leaflet, which were not targeted by any other cortical area. Across diverse cortical regions, the set of layer 5 targets appears tailored towards each region’s functional specializations (i.e. for prefrontal cortex, executive function).

We also observed that not all layer 5 terminal boutons are large. For a subset of corticofugal pathways, we quantified the size of terminal boutons in the target area and found that both cortical area and target structure predicted terminal size, suggesting pathway-specific differences in terminal morphology. As large terminals from layer 5 have been previously linked to with strong and efficacious synaptic transmission, our finding of various terminal sizes among layer 5 terminals suggests these corticofugal pathways vary in strength.

Our data revealed layer 5 cells projected to a wider array of subcortical targets than previously believed, including multiple nuclei in both thalamic and extrathalamic structures. We identified some variation in these targets across cortical areas, but also a high degree of overlap, suggesting corticofugal pathways converge in subcortex. Thus, projections from layer 5 of the neocortex may impact behavior and cognition through widespread subcortical efferents.

While our work identified many layer 5 corticofugal pathways, future studies should examine each to clarify physiological characteristics, and thus contribution to behavior.

Visit JNeurosci to read the original article and explore other content. Read other summaries of eNeuro and JNeurosci papers in the Neuronline collection SfN Journals: Research Article Summaries.