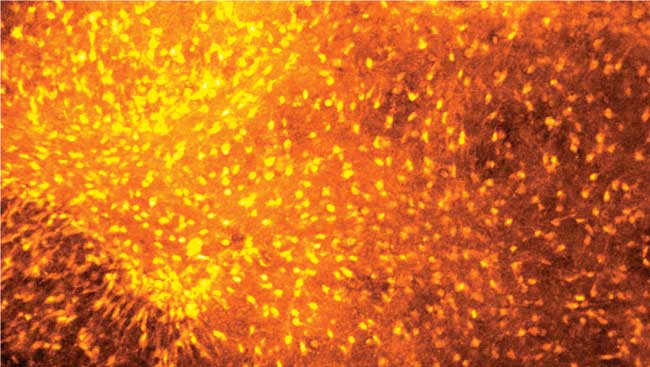 Amidst the accelerating pace of gene discovery lies the realization that each individual’s genome contain a sobering degree variation containing hundreds of mutations and variants — many of them rare. Accurately interpreting the biological relevance of this variation poses considerable challenges to traditional methods of studying human genetic disorders.

Researchers have learned a great deal studying human genes inserted into mouse models. However, the onslaught of genetic discoveries combined with the time and costs required to screen each variant in mouse models make such methods unworkable.

Faster, cheaper screening can be achieved with other model organisms such as the roundworm (Caenorhabditis elegans) and fruit fly (Drosophila melanogaster). While both are easy to manipulate genetically, they are a lot less like human beings. Zebrafish (Danio rerio) models are beginning to bridge the gap between species.

Researchers began using zebrafish about 20 years ago in a quest to understand vertebrate development. The common freshwater aquarium species has generation times of just three to four months, and each mating pair produces several hundred transparent embryos that develop rapidly and synchronously, making their development easy to observe.

Like humans, zebrafish are vertebrates with many homologous structures — 70 percent of zebrafish genes have a human ortholog. Decades of developmental study has spawned a vast catalog of mutants and a public, annotated genome all stored in ZFIN, the Zebrafish Model Organism Database, along with anatomical atlases and useful molecular tools.

Those tools include several methods developed over the past 15 years that precisely target candidate genes and alleles. Morpholinos, antisense oligonucleotides, can knock down expression of specific genes. Scientists can create germline mutations using retroviruses, transposons, and a technique called TILLING that induces local, targeted genomic lesions.

Zebrafish models have contributed to our understanding of several human disorders. For one, Timothy syndrome, a disorder characterized by irregular heartbeat, webbed fingers and toes, and abnormal development of the face and jaw, is caused by a mutation in the gene for a voltage-gated calcium channel. Expression of the gene variant CACNA1C in zebrafish revealed a gain of function and a new role for the channel in non-excitable cells of the developing jaw.

The zebrafish model has drawbacks. The most serious is that their genomic structure, like that of all teleost fishes, differs notably from other vertebrates. A teleost-specific genome duplication disrupts the correspondence between their genome and ours, with a preponderance of many-to-one and one-to-many rather than one-to-one relationships among orthologous genes.

Still the genetic tractability, ease of breeding and care, and early success in some human diseases point to the potential for many contributions to our understanding of how human genetic variety contributes to health.