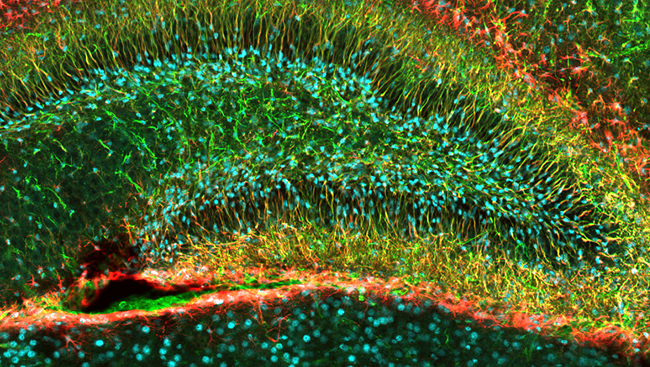 In the temporal lobe, nestled underneath the cortex, is an almond-shaped capsule of neurons known as the basolateral amygdala (BL). It has long been considered central to the production of learned emotional behaviors. For instance, when you avoid a dark alley or run into a store to get a refreshing bottle of water on a hot day, your BL is likely coordinating with a wide variety of brain regions to enable these behaviors.

Traditionally, the BL has been thought to do this by linking input stimuli with appropriate behavioral effectors through segregated circuits. Such “feed-forward” circuits were thought to support rapid emotional responses to environmental cues a subject previously experienced. This contrasts with how cortical circuits, which are highly interconnected and coordinate their activities using oscillatory cycles of excitation and inhibition, are thought to operate. Rhythms can be recorded using implanted electrodes that measure the local field potential (LFP), which reflects the combined electrical activities of numerous nearby neurons.

A particularly prominent rhythm in the LFP is gamma oscillations. These are strongest during awake, attentive states and are thought to play a critical role in cortical information processing by facilitating the synchronization of neurons between diverse brain regions. Recent LFP recordings from the BL have reported gamma oscillations when rats or mice were vigilant. However, although cortical regions are known to generate gamma intrinsically, the different connectivity among cells in BL raises the question of whether BL can do so, or whether it inherits gamma from the numerous cortical regions that feed in to it. Moreover, if the BL does generate gamma, will it coordinate its neurons in a similar manner?

Since these questions are difficult to address experimentally, we developed a physiologically based model of BL using known anatomy, in addition to cellular and synaptic neurophysiology. Our model had 27,000 cells (one-sixth the number of cells in a rodent BL) and was sufficient to successfully reproduce the transient gamma oscillations observed in vivo. The model included principal neurons (PNs) and fast spiking interneurons (FSIs) interconnected with excitatory and inhibitory synapses that were matched to those found in the BL. Model gamma was found to synchronize neuronal spiking activity and provided several new insights into the physiological underpinnings of gamma in BL.

First, we asked whether BL itself is capable of generating gamma as observed in vivo. To explore this, we delivered extrinsic inputs that lacked gamma frequency to the BL model, and found spontaneous gamma emerged in model LFP traces, with properties that matched those seen in in vivo recordings. This finding clears up the ambiguity that BL, traditionally treated as a relatively simple circuit that may only relay oscillations from afferents, is capable of generating gamma intrinsically. Moreover, we found that BL gamma oscillations require interactions between PNs and FSIs, and an absence of connections in either direction eliminated gamma.

Second, we investigated how the relative proportion of PN and FSI inputs to BL neurons affects their entrainment (a measure of how frequently the spikes occur at any particular phase of the rhythm) to the gamma rhythm, a question that is difficult to explore experimentally. The model predicted a significant positive relationship between entrainment of PNs and FSIs to the local LFP, driven primarily by the number of inputs they received from nearby inhibitory FSIs but not excitatory PNs.

Third, we took advantage of the fact that the model permitted virtual LFP recordings throughout the entire extent of BL to investigate the emergence and spread of gamma oscillations. LFP at a location in the model is measured as the change in voltage due to the transmembrane currents arriving at that location from all neurons in the network. We found gamma bursts, even in relatively small nuclear structures like BL, can be highly localized. However, they are not spatially confined: They can emerge at one location and terminate in another. Just as a crowd in a sports stadium can produce a wave that travels around the arena, so too can BL PNs excite their neighbors, who then excite their neighbors, producing a gamma burst that moves. Such propagation may mediate interactions between distant cell populations.

Lastly, the model showed gamma synchronizes the firing of PNs. Since BL PNs have distinctively low firing rates, this may help them to drive their downstream target structures more effectively. The physiological mechanisms involved in this synchronization also produced competition between groups of PNs. Those receiving stronger external drive suppressed weaker ones. Eliminating gamma in the network reduced this competition. Thus, gamma can potentially affect the selection of PNs that are active in the BL and their ability to control their target structures. These processes are, in all likelihood, important to how the BL links stimuli in the environment with appropriate emotional behaviors.

Moving forward, there are two reasons why having a detailed biophysical model of gamma generation in BL is important. First, we need a better understanding of the variety of situations that bring about and alter BL gamma oscillations, and a concrete model provides a framework in which these observations can be integrated with one another. Second, a biophysically detailed model can serve as a testbed for exploring the means and algorithms that might be used to alter these oscillations for therapeutic purposes. For instance, by constructing a biophysically detailed model of BL, we can explore the role of specific ion channels in the generation of gamma oscillations. Since these channels can be targeted by drugs, future investigations could use the model to screen for pharmacological manipulations that could potentially up- or down-regulate BL gamma.

Feng Feng
Feng Feng is a PhD candidate at the University of Missouri-Columbia.
﻿