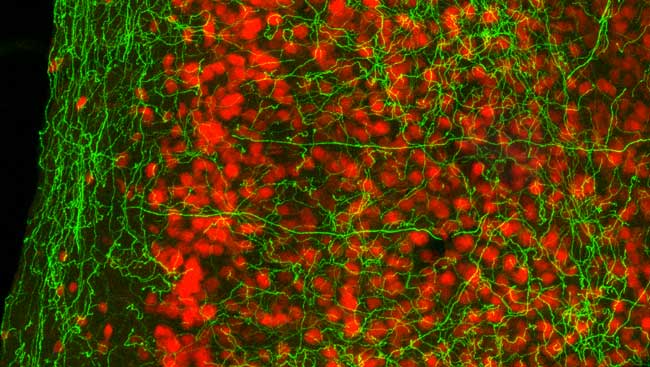 The neocortex, which serves higher-order functions such as sensory perception, motor control, and cognition, is one of the most enigmatic structures of the mammalian brain.

In our article, we used computer simulations to study the computational properties of a model of one of the most prominent microcircuit motifs of the cortical column: densely interconnected populations of pyramidal neurons and parvalbumin positive (PV+) inhibitory interneurons in cortical layer 2/3.

Recent experimental data on the connectivity structure and spiking behavior of this microcircuit motif in vivo provided us with valuable new insights into its computational organization.

The pyramidal cells in the network motif receive input from upstream circuits. It is believed that these neurons encode the input through sparse firing, thereby providing a compact encoding of sensory events in the environment.

Previous models of this layer 2/3 microcircuit motif have assumed that inhibitory feedback is strong, such that at most a single pyramidal cell gets activated at any point in time, an architecture that is frequently referred to as the winner-take-all (WTA) architecture.

Our goal was thus to understand the impact of this softer type of inhibition on neural codes and computational properties of the motif.

Based on the aforementioned experimental data, we developed a spiking neural network model of the layer 2/3 microcircuit motif.

There exists a general consensus that the computational function of the cortical column is not entirely genetically predetermined. Rather, it is believed that synaptic plasticity mechanisms shape the efficacies of synaptic connections between neurons and thereby the network’s computational function based on the statistics of incoming activity elicited by sensory experience.

We therefore asked which neural codes emerge in this microcircuit motif model under spike-timing-dependent plasticity (STDP), a well-studied plasticity mechanism of cortical synapses.

Computer simulations of our model confirmed that the behavior of the model strongly deviates from that of WTA architectures. While WTA architectures predict extremely sparse activity with only a single neuron being activated for a specific input pattern, assembly codes emerged under STDP in our model where groups of neurons responded to a specific pattern.

These results indicate that the classical WTA model has to be replaced at least for this microcircuit motif by a variant of the k-WTA model, where several (k) winners can emerge simultaneously from a competition of pyramidal cells for firing.

However, our simulations showed that the number k in our model is not fixed, but rather depends on synaptic efficacies and the external input. Hence, one can best describe its computation as an adaptive k-WTA computation.

It has been suggested by Peter Földiák that complex objects or scenes are encoded in the brain through a sparse modular code, where the presence of a particular feature in the network input is encoded through the firing of one neuron or one assembly.

We wondered whether the layer 2/3 microcircuit motif would in principle be able to generate such modular codes from input patterns with entangled features.

To answer this question, we generated network input where several spike patterns were superimposed at various relative delays, but none of the patterns was shown in isolation. Computer simulations of our model showed that separate assemblies emerged for each of the basic patterns.

This suggests that interconnected populations of pyramidal neurons and PV+ interneurons in cortical layer 2/3 may be able to de-mix superimposed spike patterns that impinge on a generic cortical area and represent the presence of each pattern in their input stream through the firing of separate populations of neurons.

In other words, our model indicates that the layer 2/3 microcircuit motif has an inherent capability to solve the well-known cocktail party problem — that is, how to extract from the mixture of speech arising from many conversations in a cocktail party the individual components — on the level of larger activity patterns. This capability emerged automatically through STDP for our data-based model.

In summary, the study provides one step towards the resolution of one of the most puzzling questions in neuroscience: What is the computational function of the cortical column?

We have performed computer simulations for one particular microcircuit motif of the column. Our study indicates that we have to revise the standard model for this motif.

Based on the current data, an adaptive k-WTA architecture is the most promising candidate to study its computational properties. Our computer simulations indicate that this model is not only in much better agreement with experimental data but also endows the cortical column with important computational capabilities.

Wolfgang Maass, PhD
Wolfgang Maass is a professor at the Institute for Theoretical Computer Science at Graz University in Austria.
﻿