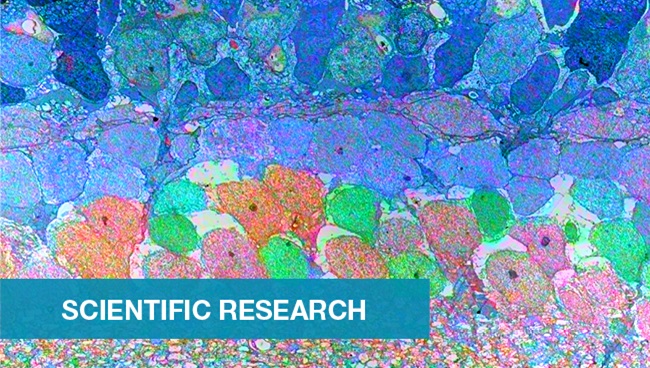 Single-cell RNA sequencing (RNA-seq) is a powerful tool that can help researchers look more deeply at individual cells, in order to better understand differences within tissues or groups of cells. One research team used RNA-seq to classify more than 1,600 cells from the cortex of adult male mice.

The researchers dissected out the cortex from several strains of transgenic mice, all of which carried some type of fluorescent marker in the visual cortex, which contains about one million cells. They made suspensions of single cells from the dissected tissue, and then sorted fluorescent adult cells. Next, the scientists isolated and sequenced RNA. They obtained an average of five million reads per cell.

The group next identified the cell types for the hundreds of cells that they sequenced by looking at all of the genes expressed by an individual cell. Their analysis focused on known molecular markers and separated cells by the similarity of their transcriptomes into 49 groups — seven groups that were not neurons, 19 glutamatergic neuron groups, and 23 GABAergic neuron groups.

By looking at all the genes expressed by each cell individually, the researchers detected new differentially expressed genes, as well as known molecular markers. They confirmed gene expression using in situ hybridization and PCR. They also found that most of the transgenic lines that they used had expected gene expression, but that the transgenes generally labeled more than one transcriptomic cell type.

The group categorized six major classes of glutamatergic neurons, which was consistent with the work of others in the field. Each of these classes could be further subdivided based on both brain location and gene expression, resulting in the definition of 19 transcriptomic types. The researchers also identified new molecular markers that helped them discriminate between the types.

Of the 49 transcriptomic types of cells that the research team found in the adult male mouse visual cortex, many had been previously described. But the group did identify new cell types using their strategy of single cell RNA-seq and transcriptome analysis. And it seems as though their ability to distinguish cell types was based upon the depth of their sample. When they downsampled their dataset from five million to one million reads per cell, they could delineate only 35 transcriptomic types instead of 49.

In the future, strategies like the researchers used in this study could be coupled with physiology, morphology, and function to learn even more about different parts of the brain. Differences in transcriptomic type might reflect what a cell is doing rather than what sort of cell it is. Datasets like the one generated here can serve as a starting point to investigate the connection between gene expression and other cellular properties and behaviors.

How would you use this strategy in your work? Share in the comments below.