Depletion of the Microbiome Changes How the Brain Responds to Opioids 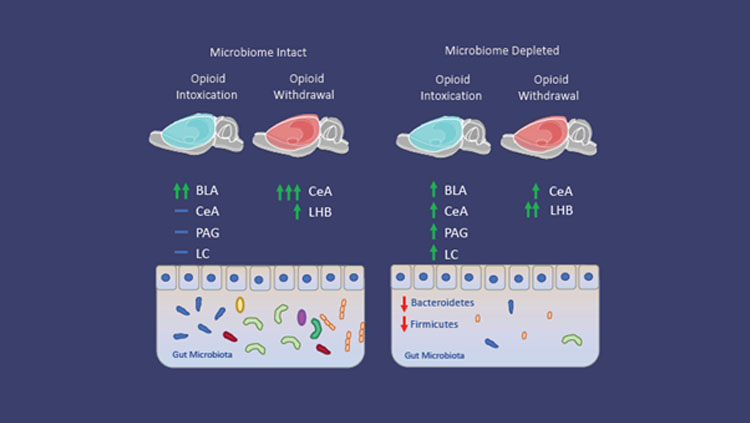 My most recent publication provides new evidence that alterations of the gut microbiome directly impact the neuronal ensembles recruited during both intoxication and withdrawal from oxycodone.

To put this concept into perspective, imagine that a patient goes in for a routine surgery. They are likely to be prescribed antibiotics and some form of pain management, simultaneously. Both antibiotics and opioids drastically impact the makeup of the gut microbiome. Opioids alter the transit time of gut contents, causing constipation upon initiation of opioid use and diarrhea upon cessation, both of which impact quantity and variety of microbes present in the resident microbiome. Furthermore, Antibiotics can kill off both protective and pathogenic bacteria that are present in the gut, altering the overall community. Microbes that are usually present are no longer available to fill the niche that can include a wide range of functions, from digesting fiber to secreting signaling molecules. Some of these molecules are known to have direct impact on the brain, but little has been done to show the direct impact of microbiome depletion on the brain circuits involved in opioid addiction.

This led our team to ask: "Are the neuronal populations being recruited in depleted animals different from those in intact animals? Does it impact how the brain experiences intoxication and withdrawal?"

One day I approached my mentor Olivier George, an associate professor of psychiatry at The University of California San Diego about exploring this question together. "Sierra just walks into my lab and asks me if I'd be interested in exploring potential connections between the gut microbiome and what my lab typically studies — drug abuse and addiction," reflects George. "I was reluctant at first. After all, I figured if there was something there, someone would've discovered it by now.” But in the end he agreed to move forward with this unique project.

To explore these questions, our team used a cocktail of antibiotics to reduce the quantity and variety of gut microbes present in a subset of rats. Then, the animals were exposed to enough opioids at regular intervals to make them dependent and to exhibit withdrawal signs.

That’s when the story gets interesting.

"To me, the most surprising thing was that the rats all seemed the same on the surface," George said. "There weren't any major changes in the pain-relieving effect, or symptoms of withdrawal of opioids, or other behavior between the rats with and without gut microbes."

At first, I thought that I might have to revise my hypothesis. That is, until I examined the brains of the microbiome depleted animals. Regions that are involved in withdrawal, such as the central amygdala, had fewer activated neurons than brains from rats with normal microbiomes. The intoxicated group also exhibited changes in regions involved in arousal and stress. Finally, after months of carefully counting the active neurons in each state, it became clear that alterations of the gut microbiome drastically changed how the brain was responding to drugs.

Shifting how the animals experienced both the rewarding effects of opioid intoxication as well as the negative effects of withdrawal could potentially increase their risk of further drug abuse.  Though there were no observed changes in behaviors of these animals, this study sets the framework for the further investigation of these mechanisms, and how those changes in the brain may alter other behaviors.

"Not only does this study suggest that gut microbes may play a role in drug addiction, if we find similar effects in humans,” George says, “it may also change the way we think about co-prescribing antibiotics and pain killers." He continues, "The way a person's gut microbes are affected could make them more or less sensitive to the opioids. The key now will be looking for biomarkers, so we can predict how a person might respond before we treat them."

Our team is currently exploring these questions further, using other models within the lab in a strain of rats with heterogeneous backgrounds, to better model the genetic diversity of the human population.

Sierra Simpson, PhD
Sierra Simpson is currently a postdoctoral researcher in the George Lab at the University of California, San Diego where she studies the gut brain axis and addiction.
﻿