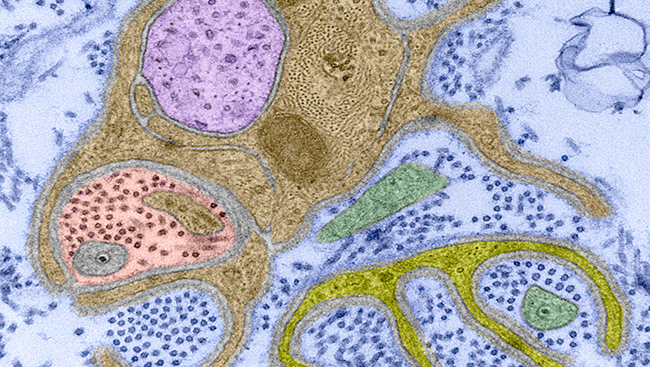 Sensory prosthetic systems, such as cochlear implants, have helped thousands of people with deficits in hearing. Visual prosthetic devices, such as retinal chips, hold great promise for the restoration of vision to those with retinal injury or disease. One key goal for the future is to bypass the peripheral nervous system altogether and build high-capacity prosthetic devices that directly connect to the cerebral cortex.

Prosthetic systems that attempt to restore function by stimulating tissue within the same sensory pathway as the deficit will likely remain the core clinical use. In some cases, it would be useful to recruit a different sensory pathway to restore a lost perceptual function.

For example, if someone is rendered blind because of damage to the primary visual cortex (V1), it is not possible to restore visual function by stimulating V1 or the retina. We may need to ask other parts of the brain, such as the somatosensory cortex, to take over visual functions.

In these instances, would the adult brain be plastic enough to make use of such novel information? While it is well-established that the brain's function is highly malleable during development, it is not clear if the adult brain can extract new sources of information projected to areas with established functions.

To examine this question, we developed a novel prosthetic system to determine whether adult rats could learn to discriminate among infrared (IR) lights, which are typically invisible to rats. We transmitted information about the IR environment to rat somatosensory cortex (S1) by coupling the output of four head-mounted IR detectors to stimulating electrodes implanted in S1. The IR detectors were arranged to give the animals a panoramic (360 degree) view of their IR environment. The corresponding stimulating electrodes were placed in the region of S1 that represented the rat's whiskers: the whisker barrels.

When first equipped with the prosthesis, rats reacted to IR-coupled barrel stimulation as an unexpected touch to the face, typically shaking their head or scratching at their face to cope with the new stimulus. However, within a few days of using the equipment, rats were able to expertly track down IR sources in their environment to receive sips of water.

Because the information was spatially distributed, we were able to determine whether the rats made use of the miniature topographic map of IR space that the prosthesis generated within S1.

We performed a series of remapping experiments in animals that had learned to use the prosthesis. We scrambled the mapping from the IR sensor to the stimulating electrode to disrupt the spatial topography upon which the animals had originally learned.

When we did this, for instance swapping the left and right IR sensors, the animals became immediately confused. When an IR light on their right turned on, they would immediately try to track it by turning to their left. This confusion was short-lived, and they learned to use the prosthesis with the new spatial mappings within a day or two.

We also recorded neuronal activity in S1 as the rats used the prosthetic system. In general, there were large widespread responses throughout the recorded regions of S1 where we stimulated. When we replayed identical sequences of microstimulation in animals that were not performing an IR-discrimination task (the task-irrelevant microstimulation condition), there were no large responses. In fact, S1 activity was significantly suppressed when stimulation was not task-relevant.

This surprising result suggests that the brain is not just responsive to the inputs it receives, but also to the relevance of inputs in a task context. A question for future research is whether this is mediated by attention or other top-down effects.

In principle, this experimental paradigm could be used to introduce the brain to any novel stimulus. We used IR light for its convenience, but rats could be trained to detect radio waves, radioactivity, explosive residue, or biotoxins. Potential applications for future research —exploring of environments that humans are currently unable to traverse, conducting search and rescue missions, or identifying impending threats — are limited largely by our ability to miniaturize the detection of stimuli.

One question our research leaves open is whether all sensory regions are equally capable of absorbing new information. Are some regions better than others? What is the upper limit on artificial information transmission?

For instance, the potential to expand one’s perceptual range to know what it is like to echolocate like a bat, has typically been the province of philosophical thought experiments and science fiction.

Our experiments suggest that the mammalian brain can transcend the limitation of perceiving only those stimuli that can activate its body’s native sensory transducers. The brain’s representation of the world seems to be in continuous flux throughout our adult lives and can be expanded to include arbitrary new sources of information.

Eric Thomson, PhD
Eric Thomson is a senior research scientist in the department of neurobiology at Duke University.
﻿