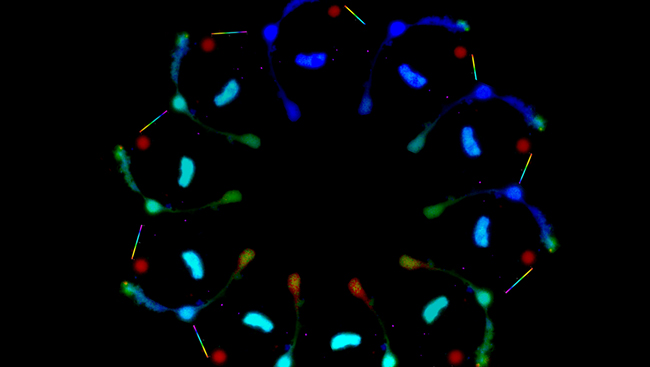 Imagine you are the parent of two children. Your oldest, a boy, was diagnosed with autism last year and just celebrated his fourth birthday. Your youngest, a girl, is six months old. You’ve heard that autism runs in families; you know this means that your daughter is at higher risk than most children. But you’ve also heard that boys tend to get autism at a higher rate than girls. Your daughter, like her brother, is a poor sleeper, and sometimes you wonder whether she is more interested in looking at the ceiling fan than at you…but other times she smiles at you or her brother and seems very engaged. You find yourself making comparisons between your two children frequently, and wondering…will she have autism too?

A friend tells you that just last year, researchers were able to scan the brains of babies when they were six to twelve months old and predict, for the first time, who would develop autism by age two. Your friend then poses the inevitable question: would you want this test for your daughter?

Predicting disease before the onset of symptoms has long been a goal of medical research. The idea is simple: identify those at highest risk, intervene earlier, and thereby (hopefully) improve outcomes. Historically, MRI and other neuroimaging modalities have been used to detect current pathology (i.e., tumors, seizure activity), but have not proven very effective for clinical prediction. More recently, the move towards larger sample sizes and more sophisticated statistical approaches—like machine-learning based classification—have enabled researchers to predict, with high accuracy, who will develop a disorder based on brain data alone.

The move towards more sophisticated statistical approaches have enabled researchers to predict, with high accuracy, who will develop a disorder based on brain data alone. MRI for clinical prediction holds great promise. MRI remains expensive compared to other neuroimaging modalities like EEG, but MRI scanners are present in most hospitals, and innovations in scanner technology mean smaller, more portable scanners may soon be available. It is easy to see a future in which affordable, widely-available MRI technology plays an integral role in predicting diseases that affect brain structure and function. However, the power to detect disease before the onset of symptoms brings with it the responsibility to carefully consider the implications of that prediction. This responsibility is even greater when a predictive test is conducted with a child who is incapable of making decisions about their own future and must instead rely on parents to make decisions on their behalf.

Thankfully, neuroscientists are not the first to encounter difficult questions about disease prediction. Presymptomatic prediction has been a topic in genome sciences for decades. Clinical medicine has been revolutionized by our ability to detect from birth a number of rare genetic diseases that, if treated immediately, can save lives and improve outcomes. Genetic testing has also been used to predict brain disorders like Huntington’s disease—a neurological disorder with onset in midlife that, unfortunately, cannot be prevented or treated. Perhaps because of the lack of treatment, uptake of testing for Huntington’s is very low: one UK study estimated that only 17% of those at risk for Huntington’s disease choose to get tested.

So to return to the thought exercise we began with: imagine you are this parent, with an older child with autism and a new baby who is at higher risk. Would you be interested in obtaining a predictive test to tell you if your baby will develop autism? Autism is a spectrum disorder, and individuals with autism can have a broad range of strengths and weaknesses. Early behavioral interventions for children with autism have been shown to be effective for improving social and cognitive skills. However, there are not yet any interventions for babies as young as six months old. So, as a parent, what might it mean to learn this predictive information and not immediately know what to do with it?

Historically, the genetics literature has recommended that predictive testing in childhood should only occur for disorders that have effective treatments. More recently, there is growing advocacy for a different approach—one which prioritizes personal utility of predictive results over strictly medical utility. Parents of children with Fragile X (a neurodevelopmental disorder that can be detected based on genetic test at birth, but which does not emerge with full symptoms until close to age two) advocate for including Fragile X along with other disorders that are tested for at birth. Even though there is no proven treatment for Fragile X, parents say that the information can still be useful for avoiding a prolonged “diagnostic odyssey” once symptoms emerge; it can also give families more time to adjust expectations and prepare to support their child with special needs, including enrolling in supportive services like speech or physical therapy.

The power to detect disease before the onset of symptoms brings with it the responsibility to carefully consider the implications of that prediction.

For autism, the days of predictive testing are still in the future. The predictive MRI approach first pioneered by the Infant Brain Imaging Study (IBIS) is currently being validated, and until it is proven that the predictive algorithm generalizes to a new group of infants, there are no plans to disclose results to families. In the meantime, I and others are working to fully understand the ethical implications of MRI-based predictive testing for disorders in childhood. While similar in some ways to the issues raised by predictive genetic testing, there are unique aspects of predictive MRI that deserve consideration—for example, conceptualizing a child’s disorder as a “brain disorder” has been associated with more pessimism about their future functioning.

As with many challenges in the ever-evolving world of neuroethics, this one combines a rapidly advancing technology with some age-old human questions about autonomy, health and identity. Ultimately, my hope is that this work will help to ensure that the technical innovations of clinical neuroscience are able to maximally benefit the lives of children and their families.

Kate MacDuffie, PhD
Kate MacDuffie is a Licensed Clinical Psychologist, a Postdoctoral Fellow at the University of Washington, and a Bioethics Fellow at the Treuman Katz Center for Pediatric Bioethics at Seattle Children’s.
﻿
MORE
4 of 5 articles left
Login or Become a Member to unlock content