How to Find Mentors and Be a Mentor as a Postdoc 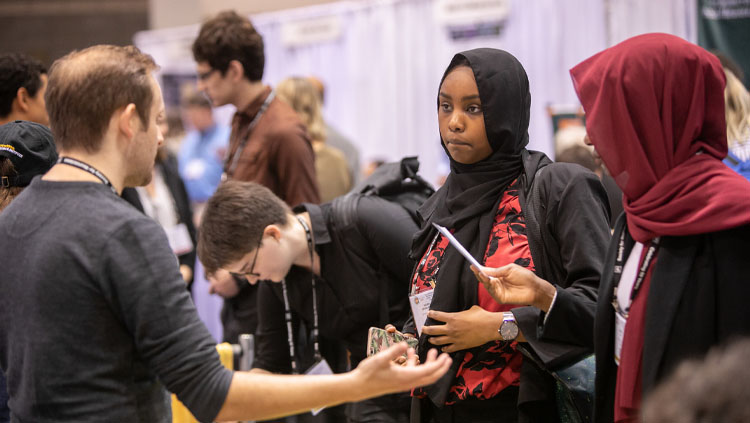 As a postdoc, you've likely had several mentors you can point to who have shaped your career path. You may be at a point where you're also starting to become a mentor.

Through networking, Shawn Bates, a postdoc in Seema Bhatnagar's lab at The Children's Hospital of Philadelphia (CHOP), has met mentors who have introduced him to opportunities and from whom he's taken inspiration for mentoring others. He has also received a Postdoctoral Fellowship for Academic Diversity at CHOP, which aims to increase the diversity of the community of scholars devoted to academic research there and at the University of Pennsylvania.

In this interview, he reflects on how mentors have helped him in his career so far and takes a forward look at applying those lessons to mentoring others.

Considerations for Connecting With Mentors

What roles have mentoring relationships played in your career growth to date?

They've been invaluable to my career growth. For example, during my master's program, a mentor identified my curiosity about neuroscience and suggested that I pursue a doctorate. That mentor and I are still very close. He also helped me to develop the skills I needed to be successful in a PhD program.

Mentors have given me access to opportunities, they've sponsored me, and they've helped me with intellectual development and training - learning how to design experiments and be critical about the questions I ask and the papers I read. A mentor in my PhD program, whom I met at SfN's annual meeting, told me about the opportunity at CHOP.

They've also served as role models. They've helped me understand the culture of science, so I know how to present myself - to cultivate professionalism - and how to be a scientist.

In what ways have you found mentors?

I learned early in my career that networking is key. I'm shy, so I've had to step outside of myself to talk to people who might be potential mentors. Now that I'm a postdoc and I've had that experience, I'll talk to undergrads or grad students, because everybody has an interesting perspective.

I have also met several of my mentors through programs like They've helped me understand the culture of science, so I know... how to be a scientist.SfN's Neuroscience Scholars Program, the Summer Program in Neuroscience, Excellence and Success (SPINES), at the Marine Biological Laboratory in Woods Hole, and Broadening the Representation of Academic Investigators in Neuroscience (BRAINS), at the University of Washington. These mentors provided me with perspective on what effective mentoring looks like.

SfN's meeting and smaller conferences have also been great for finding scientific mentors, and talking to grad students, postdocs, and senior faculty about their science.

What's your advice for finding mentors?

Most important is taking the initiative to find potential mentors. I've been fortunate to have the mentors I've had, who have given me access to a wide range of opportunities, but I've also had to pursue opportunities on my own.

For example, I've forged relationships with mentors through informational interviewing. I've sent messages on LinkedIn or found people's emails and asked them to meet because I was interested in their careers.

During the first year of my postdoc,I've been fortunate to have the mentors I've had... but I've also had to pursue opportunities on my own. I went to career exploration panels and workshops to see what excited me, and then I would follow up with some of those panelists or the people at those sessions to learn more about their work.

And once you've found someone who you think could be a mentor, you have to establish and maintain contact with them. It was not enough to identify mentors. It was also important to discuss what I was hoping to get out of our conversations.

Now that I have a better idea of what I want to do, I've reached out to people who are currently in those positions. I'll ask them questions like, "What's a day in your life like?" and "How did you take the skills you learned as a graduate student, or as a postdoc, and translate them to what you're doing now?"

What is important to learn about a potential mentor when you're a postdoc?

First you have to decide what your focus is. If you're focused on research, find out if your research interests match with those of your potential mentors and if you see yourself doing those experiments day in and day out.

It was important for me to find somebody I felt like I had a collegial relationship with, someone I could talk to, and who I felt comfortable going to about the research and about my career goals. I needed to have a good feeling about the person and the rest of the lab, too.

Also important is that they have funds to support you if you don't have your own funding.

What mentoring activities are you a part of?

I'm a part of programs like CHOP Rises, and I've gotten involved with programs in the Greater Philadelphia area. There's one in which we work with underrepresented high school students and show them how to apply to colleges.

I am also co-chair of the Biomedical Postdoc Council Diversity Committee. One of our initiatives to try to increase representation in the sciences is through mentoring circles, composed of postdocs, grad students, and undergrads from underrepresented groups. The idea is to connect an undergrad with a grad student and a grad student with a postdoc, so everyone receives the support they need.

Most of our initiatives involve working with people who are still finding their way and trying to keep them encouraged so they make it through. Especially at the undergraduate level, impostor syndrome and stereotype threat can cause people who are interested in science to not want to pursue it or to complete their studies.

How have your mentors informed your approach to mentoring others?

One characteristic that I feel made my mentors effective was that they were caring and put major effort into their programs and into each of us, through either one-on-one meetings or group mentoring sessions.

Similarly, in the work that I do with undergrads and high school students, I've found it's important to be supportive, patient, and willing to put in the time for them.

For example, one of the high school students that I mentored has started college now. She reached out to me and said that one of the things she was most grateful for was the effort I put in to help her when she was applying for college and trying to figure out her financial aid.

Another aspect of mentoring is being attuned to what your mentee's needs are so you can help them. Most helpful for me has been sponsorship and encouragement. I've had mentors who have encouraged me to continue pursuing a scientific question. Some people need other kinds of support, though, and some people just need space.

One characteristic that I feel made my mentors effective was that they were caring and put major effort into their programs and into each of us.

Open communication between mentors and mentees, where each person feels comfortable when talking to the other, is an important part of knowing what your mentee's needs are. One way to establish this is to have conversations around an Individual Development Plan, where you make a contract saying what you need from your mentor and what your mentor needs from you, and then as a mentor, you're willing to adjust if necessary.

What are your goals as a mentor?

A goal of mine is to encourage young people, including those from underrepresented groups, to pursue their goals. It's important for everyone to have role models that give you the ability to say, "If that person who has a similar background to mine made it, I can, too."

Serving as a role model is important to me because I come from a background where I never really considered this career for myself, mostly because I didn't know about it. Even when I was taking a neuroscience class in undergrad and voraciously reading - I would basically camp out in my professor's office hours to the point where he'd say, "You have to leave. I have other things to do" - I still asked myself, "How are people figuring this out?" I had no idea you could do science and be at the forefront of discovery. It was all a mystery.

My career goal is to work at a primarily undergraduate institution so I can have a lab of my own where I can train students. Role models of mine have shown me that that's one way to really effect change in representation in science.

Shawn Bates, PhD
Shawn Bates is a current Fellow in the 2018–2020 class of SfN’s Neuroscience Scholars Program. Bates received his PhD in neuroscience from Texas A&M University in 2017. His interests include higher learning and research that is focused on how environmental factors, like stress, can contribute to addiction.
﻿
MORE
4 of 5 articles left
Login or Become a Member to unlock content