Scientific Storytelling: How to Win Hearts and Minds 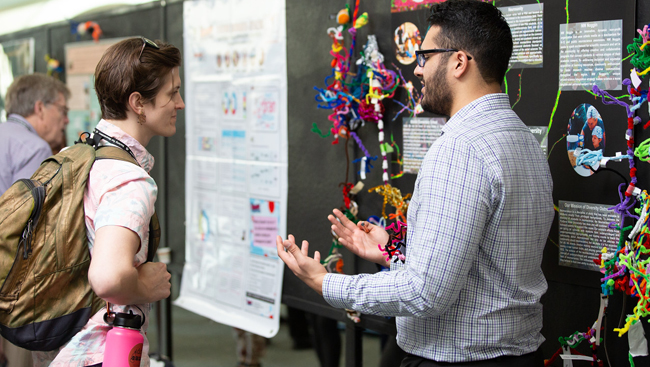 The following describes the second storytelling minisymposium at SfN’s annual meeting. The session will be held at every annual meeting going forward, bringing together neuroscientific discovery, science reporting, and personal storytelling through lectures and personal stories. Neuroscientists will understand how to engage the public creatively and effectively and come away with tangible strategies for sharing their passion for science using their imagination and emotions.

When she was younger, Jean Mary Zarate played the violin well and hoped to attend a music program for youth at Juilliard, the prestigious music conservatory. However, as the daughter of two medical professionals who moved from the Philippines to the United States, she chose to pursue a career in science.

Still, Zarate couldn’t ignore her love of music. As an undergraduate neuroscience major, she planned to become a neurosurgeon, but after dropping out of a premed program to commit more time to teaching music, she realized that career path wasn’t for her. Research allowed her to study the relationship between music and the brain, and she devoted herself to it.

Now a Nature Neuroscience senior editor, Zarate has accepted she has two passions — neuroscience and music — and she finds ways to combine them.

“Science most often takes over, but I no longer have to prioritize one half of myself over the other,” she says. “I need both.”

One of three stories told by neuroscientists at the “Telling Stories of Science” minisymposium at Neuroscience 2018, Zarate’s carries a lesson not unlike this one about finding your path, but it has another lesson, too: Stories can move your audience to think, remember, and act, making them one of the most powerful forms of science communication.

Learning to tell good stories is a skill anyone can use to help an audience understand the importance of your research and support science. Scroll for the how, the why, and the neuroscience behind bringing science to life through stories.

According to Mónica Feliú-Mójer, director of communications and science outreach for Ciencia Puerto Rico and one of the panelists at the minisymposium, stories can be a force for change. They allow you to put your science in context and make it relevant to your audience’s lives.

To tell an effective story, she advises:

Effective science communication can help you be published and cited, and it can help you reach other scientists, nonscientists, and policymakers. To do so, you need your audience to trust you.

Paula Croxson, senior manager for education programs at Columbia University’s Zuckerman Institute and New York producer for The Story Collider, says trust is about more than demonstrating your competence as a scientist — it’s about credibility, which you can build by telling stories that use the following “narrative factors”:

Your identity as the narrator can also be influential in encouraging your audience to follow through on the simple actions you pair with your story. Allow it to come through in your story by using emotion as well as humor, humility, and vulnerability, which can be as simple as sharing you didn’t know what would happen next in your experiment.

Storytelling confers us the ability to shape our future thoughts and beliefs, says Uri Hasson, a professor of psychology and neuroscience at Princeton University. This is because, during encoding, the speaker’s point of view determines, in part, your neural responses.  It’s an example of memory reinstatement, in which the context for the encoding of a memory influences how people recall an event.

Moreover, in his research, Hasson found that memory representations are spatially organized in a functional architecture shared across brains.

Taken together, these findings offer scientific evidence that stories are an influential communication tool, and storytelling is a skill that can help you connect with your audience.

Attend the minisymposium at Neuroscience 2019 to improve your science communication skills. Also watch this workshop from Neuroscience 2017 and read this interview with Paula Croxson.