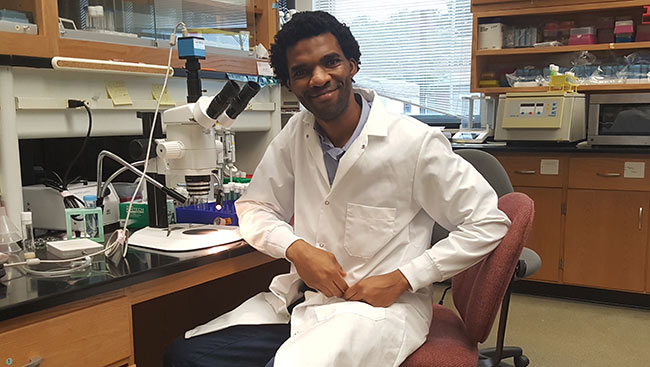 Hakeem Lawal, PhD
Hakeem Lawal is an assistant professor of neuroscience in the department of biological sciences at Delaware State University. His primary research interest is in using the model organism Drosophila to understand the molecular basis for neurodegenerative diseases, such as Parkinson’s and Alzheimer’s diseases, and developing suitable disease-modifying therapies. Lawal currently serves on SfN’s Global Membership Committee and previously served on SfN’s Professional Development Committee, and is an SfN Neuroscience Scholars Program alum. He received a BS in microbiology from the University of Lagos, an MS in molecular and cell biology from the University of Alabama, and a PhD in molecular and cell biology from the University of Alabama. He completed his postdoctoral training in psychiatry and biobehavioral sciences at the David Geffen School of Medicine at the University of California, Los Angeles.
﻿
MORE
4 of 5 articles left
Login or Become a Member to unlock content