How Can Synaptic Axon Terminals Adapt to Altered Metabolic Demand? 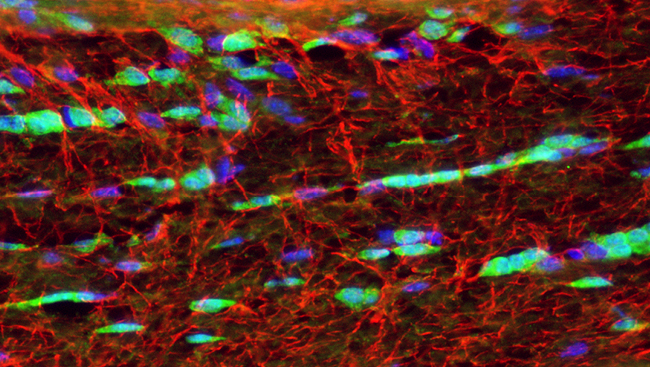 Synaptic transmission, the process through which brain cells communicate with each other, consumes a huge amount of energy, the vast majority of which is provided by neuronal mitochondria.

As information is being processed and stored in the brain, long-term changes occur in synaptic strength, altering both the structure and the activity of these connections. This means the amount of energy needed at a given location in neural networks is also changing in space and time, making some kind of adaptation mechanism necessary.

Our eNeuro paper describes the structural basis of this — so far unrecognized — adaptation mechanism that is likely responsible for local demand matching.

These numbers highlight the extreme energy demand of the brain. The majority of this energy is used for synaptic transmission, the main communication pathway between nerve cells. Synapses are fundamental building blocks of the nervous system, and their strength is changed in an activity-dependent manner.

This process, synaptic plasticity, is critical for processing and storing information. During synaptic plasticity, the efficacy and thus the activity of these connections are altered, which is the result of profound structural changes in the size, active zone shape, and molecular composition of the synapse.

It is well known stronger synapses need more energy, but whether adaptation to local changes in energy demand would occur has been largely unclear.

The powerhouses of eukaryotic cells are mitochondria, the main energy generators in neuronal tissues. They are critical for providing energy for synaptic transmission through oxidative phosphorylation, although at low rate activity glycolysis can contribute to the energy supply as well.

Recent studies confirmed the inner fine-architecture (ultrastructure) of mitochondria ultimately determines the output performance of these organelles. It is quite logical: If we imagine mitochondria as engines, it’s easy to see the power output is clearly defined by the number and volume of cylinders, the number of valves, and the charging pressure.

In the case of mitochondria, the overall volume of the organelle, the amount and density of inner membranes — cristae, where energy producing enzymatic processes take place — and the quantity of these enzymes are the key factors, determining the performance output.

We hypothesised stronger synapses utilize stronger mitochondria. To test our hypothesis, we studied presynaptic mitochondria of the mouse and the human brain with cutting edge methods, such as super-resolution microscopy and transmission electron tomography.

We found the abovementioned performance-determining ultrastructural parameters of these organelles show a strong correlation with synaptic strength, independently from the type of the neurons.

We discovered mitochondria at stronger synapses are larger and contain more crista membranes and higher amounts of respiratory chain proteins, verifying a clear correlation between mitochondrial and synaptic performance.

This performance coupling can be achieved either by a coordinated long-range retrograde/anterograde axonal trafficking of mitochondria, or by local plasticity mechanisms that lead to adaptation of single organelles.

In the first scenario, the mitochondrion from the strengthened synapse would need to be withdrawn and transported away — possibly back to the cell body of the neuron — and another, stronger mitochondrion would be sent out to replace it.

The coordination of this process, together with the evident gap in energy supply during the exchange, is more than problematic. Recent studies have also confirmed mitochondrial trafficking is way less frequent than thought previously.

These data, together with our findings, suggest local energetic demand matching is achieved by the ultrastructural adaptation of axonal mitochondria.

If you need to go faster, you’ll need a more powerful engine in your car. In fact, it’s much easier to open your engine hood and put on a turbocharger and a nitro-kit, than to remove the complete engine, take it to the nearest car factory on your back, get a bigger one, and walk back home.

Visit eNeuro to read the original article and explore other content. Read other summaries of JNeurosci and eNeuro papers in the Neuronline collection, SfN Journals: Research Article Summaries.

Csaba Cserép, MD, PhD
Csaba Cserép is a postdoc at the Institute of Experimental Medicine at the Hungarian Academy of Sciences.
﻿