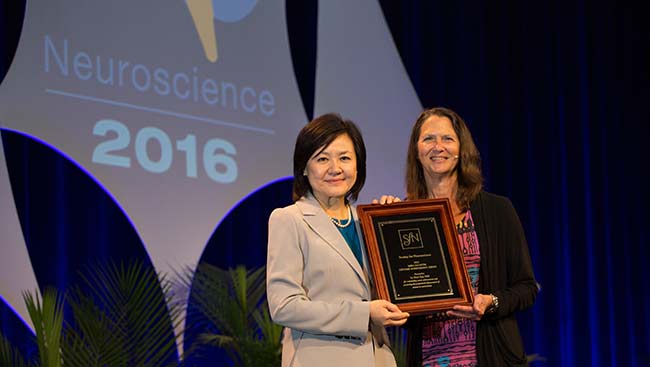 Last April in Cell, a research team led by Li-Huei Tsai showed that not only 40Hz light, but also exposure to 40Hz sound, can effectively increase gamma power and synchrony across the brain, reduce amyloid and tau buildup, and improve learning and memory in multiple mouse models of Alzheimer's disease. One month later in Neuron, the team showed in that longer-term regimens of 40Hz light (three to six weeks versus one week) change gene expression in neurons and microglia, prevent synapse and neuron loss, and improve learning and memory.

The novel yet simple light-based therapy for Alzheimer's disease that Tsai's lab first developed in 2016 is now in clinical trials at the Massachusetts Institute of Technology. While many members of the group continue to work to better understand several key mechanistic questions underlying the measured benefits of sensory gamma rhythm stimulation — including the means by which glial cells as well as neurons change their gene expression and activity as a result — other members of the team have begun a program of human clinical studies studying safety and efficacy in healthy people and in people with early Alzheimer's or cognitive impairment.

For her groundbreaking research and commitment to mentoring women of all backgrounds and career levels, Tsai received the Mika Salpeter Lifetime Achievement Award in 2016. Here, she talks about creativity in research, as well as diversity and mentoring as hallmarks of a strong lab.

This interview was originally published in 2017.

What led you to look at treating Alzheimer's disease from a new angle?

To evaluate the ways brain circuits and neuronal population dynamics might be impacted in Alzheimer's disease, we look at a particular firing pattern of neurons. Neurons in the brain can fire in synchrony, which produces brain oscillations in many different frequencies.

In particular, gamma frequency firing, known as gamma oscillations, is known to be involved in higher order brain functions, such as attention, perception, and working memory. For example, when you are actively engaged in a particular task like working on deadline, the gamma regions in your brain become robust and strong.

We found that in the very early stages of Alzheimer's in the mouse model — even before any symptoms can be detected — gamma regions are already disrupted. So, we tried to bring the gamma regions back in the mouse brains. We collaborated with engineers and computer scientists at MIT and also searched the literature to figure out whether we could come up with a noninvasive method.

Eventually, we realized that since gamma is linked to sensory perception, if we flicker a light to the mice, and if the light flickers around gamma frequencies, neurons in the visual cortex can track and fire at the exact same frequency. We detected this by doing in vivo electrophysiological recordings.

After we realized we could use noninvasive sensory stimulation to introduce gamma oscillations in the brain, we investigated what happens after these light-flickering treatments. Much to our surprise, we found that beta amyloid peptides, known to be the culprit of Alzheimer's disease, are drastically reduced.

Right now, all the other approaches carried out by the drug industry use small molecule chemical inhibitors or antibodies to reduce beta amyloids or other enzymes. These approaches are invasive because they introduce foreign substances to the system, while our approach uses a completely noninvasive method to enhance the brain's intrinsic properties to make it more robust.

What was it like when you realized your technique was working?

When we first realized our approach reduced beta amyloids, we were shocked and didn't know whether we could believe it. We reproduced this result over and over again, and even had other people in the lab reproduce it.

We didn't know whether we could believe it. We reproduced this result over and over again, and even had other people in the lab reproduce it.I'm very pleased with how this project has gone, not only because our method of reducing beta amyloids is highly reproducible, but also because the ongoing work in the lab shows this non-invasive light flickering approach has a systemic effect on the brain beyond reducing beta amyloids. In our Nature paper, we discuss how this technique can also reduce tau phosphorylation and impact microglia by dramatically changing its morphology and property. We now have more evidence that it also impacts other cell types in the brain, which has beneficial effects on multiple fronts. Overall, it has been very exciting.

Cognito Therapeutics, the startup you co-founded, is developing devices to bring this therapy to human trials. What questions are you currently investigating?

Right now, Cognito has to answer two big questions before thinking about going to human trials. First, we know sensory stimulation can induce gamma in mouse brains, so the question is whether human neurons can also respond to this noninvasive sensory stimulation. If that's the case, the second question is whether enhanced gamma oscillations reduce beta amyloid in human brains.

If the answers are positive to both questions, then we can seriously think about human trials. There are a lot of safety regulations for human trials. Currently, we are in the middle of getting Research Review Board approvals, lining up hospital collaborations, and recruiting healthy humans for the trials. We hope these initial feasibility and safety checks and approvals can be done this year.

At the time of republication of this interview, in 2020, three clinical studies to study the effectiveness of gamma stimulation were underway.

How has your research environment contributed to your creative approach to problem solving?

MIT is a relatively small community and I am fortunately exposed daily to different disciplines. Just within our building, we have electrical and biological engineers and computer scientists — people who think differently than me. This benefits me a lot.

Just within our building, we have electrical and biological engineers and computer scientists — people who think differently than me. This benefits me a lot.

Everybody wants to figure out how the brain works, which is clear when I interact with my colleagues in different departments and schools. Regardless of their backgrounds, engineers, computer scientists, chemists, physicists, and mathematicians are interested in knowing how the brain works. It's an amazing environment for me to learn how people from different disciplines think, which creates a culture of out-of-the-box thinking.

Besides a diversity of disciplines, what other factors can shape a collaborative and productive research environment?

I try hard to cultivate open-mindedness and transparency in my group. I make sure everybody in the lab knows each other's project well, and that they collaborate. This approach creates an environment without hidden agendas or competition.

This type of environment is so important. I'm proud that men and women — women in particular — do well in this setting. In the light therapy paper, the two co-first authors are women who collaborated closely across different laboratories: Hannah Jaccarino, a former graduate student in my lab, and Annabelle Singer, a former postdoc in Ed Boyden's lab.

I've seen this lab dynamic empower women and underrepresented minorities to believe they can do very cool science; combine neuroscience, engineering, and computer science approaches to solve problems; and lead.

All of these approaches allow people to think big and feel they can do anything as long as they work hard.

What advice do you have for mentors or PIs to create this type of positive and productive lab?

Li-Huei Tsai, PhD
Li-Huei Tsai is a professor of neuroscience and the director of the Picower Institute for Learning and Memory at the Massachusetts Institute of Technology. Tsai is also a fellow of American Association for the Advancement of Science (AAAS), a member of the National Academy of Medicine, and an Academician of the Academia Sinica in Taiwan. She was previously a professor at Harvard Medical School and the investigator at the Howard Hughes Medical Institute. Her research interests lie in elucidating the pathogenic mechanisms underlying neurological disorders that impact learning and memory. Tsai received her PhD from the University of Texas Southwestern Medical Center and completed her postdoctoral training at Cold Spring Harbor Laboratories and Massachusetts General Hospital.
﻿
MORE
4 of 5 articles left
Login or Become a Member to unlock content