How One Scientist Studies Bats to Explore Difficult Questions 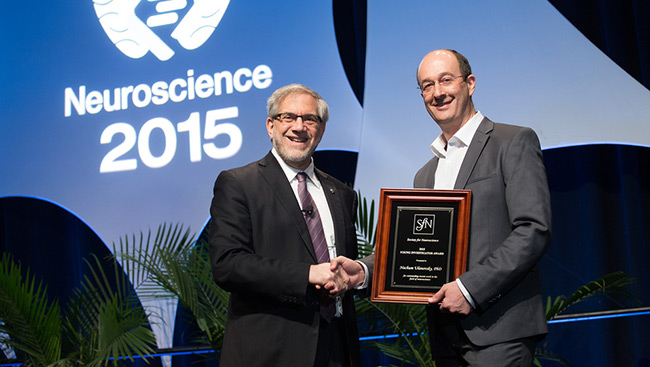 Nachum Ulanovsky was the first to record neural activity in a freely moving bat. By doing so, he was able to investigate how cells in the hippocampus encode a spatial representation of the three-dimensional environment. For these accomplishments, Ulanovsky received the Young Investigator Award in 2015. Here, he discusses his research.

What led you to work with bats to study learning and memory?

During my PhD in neuroscience, I actually worked not on bats, but on the auditory system of cats and studied effects that turned out to be related to memory. I then started reading about the hippocampus and was fascinated by the notion of place cells, and saw that there were so many labs studying this already in rats. Coming from the auditory system, I knew a lot about bats. Because bats are a major animal model for the auditory system, I thought they would be a very interesting and unique animal model. You can study bats to ask questions that are difficult to study in other animals. I also took a course in neuroethology and really got hooked on the idea of studying the neural basis of natural behaviors. This is a process that took a few years during my PhD, until I converged on this direction.

Can you describe any “a-ha!” moments that shaped your process of discovery in the lead-up to your first recording of neural activity in a freely moving bat?

Early on, I wanted to study how two-dimensional space was represented in the hippocampus. During my postdoc, I developed a wireless electrophysiology system together with Neuralynx, and recorded from single neurons in the hippocampus of crawling bats.

Moving to flying bats, I started my own lab eight years ago at the Weizmann Institute in Israel. My PhD student and I were working hard to pursue the idea of having a pack with a transmitter on the back of the bat and a device on the bat’s head, and it had a cable in between them. This didn't work very well. The bat was flying in one direction, the transmitter in a second direction, and the head-stage preamplifier in a third direction; the cable was not robust and was not working very well.

Then, one day, I had the very simple idea of getting rid of the cable, and instead putting the backpack on the bat’s head and rigidly connecting the preamplifier and transmitter using a rigid connector instead of a cable. Within a few days, we had our first recordings from a flying bat. We were able to show that the hippocampal neurons are active when the animal flies through a three-dimensional volume that's roughly spherical in shape.

How has your research evolved since then?

In a different line of research, in rodents as they're moving around, you have very prominent movement-related theta oscillations in the hippocampus and entorhinal cortex. However, it turns out that we don't see them in bats, nor very prominently in primates, either. This essentially put doubt on at least some of the functional theories that try to give function to these oscillations, for example, in generating grid cells.

What are the big questions you are currently trying to answer? Ultimately, what do you hope your research accomplishes?

The big question for me is: How is the brain generating behaviors under natural, real-world conditions. We are used to studying the brain either in non-behaving animals, or if they're behaving, then in very restricted laboratory conditions. This is great for the classical reductionist approach in biology. You can control all of your variables, but the downside of that is that hit is a very impoverished situation, and behavior, by definition, is very rich and diverse.

My worry has always been that by controlling too much, we might be restricting the very thing that we're trying to understand — behavior. There is mounting evidence that once you let the animal conduct more natural behaviors, you find surprising things about the brain.

I've seen this trend in other brain systems. In the context of the brain's navigation system, which I'm studying, I am working toward recording under more and more natural conditions. Unlike most experiments that study place cells, grid cells, and head-direction cells in animals moving in small boxes or on small linear tracks, we're moving to more complex, three-dimensional, and large environments.

We ask: How are animals navigating towards goals, and what are the neural mechanisms of that? And, what is the neurobasis of the representation of space on a scale of hundreds of meters or even kilometers? We are actively working on developing technologies that allow us to record wirelessly on such scales.

Eventually, what I hope to accomplish is to shed light on the neural basis of natural behaviors in natural, or naturalistic, conditions and understand how the brain functions in the real world, which we know very little about.

Do you have any advice for people coming up in the field about research paths, discovery, or choosing labs?

In terms of choosing projects, very commonly you see a very defensive approach. People ask, "What if this doesn't work, what is your back-up plan?" This is very prominent in grant writing — you are always supposed to explain how you will deal with problems. This is true, of course; you do need to have back-up plans.

My approach, though, is much more offensive. When a student comes to me with an idea, I always ask them to think about what would be the most interesting and exciting outcome that they can imagine that might come out of this experiment. If the most exciting outcome is not that exciting, then I don't think it's worth the effort. Every experiment, no matter how big or small, is a lot of work. But if there are several reasonable outcomes that are exciting, then it's worth pursuing.

Then, of course, you need to think about the "what-if" questions, but I always prefer to concentrate on being optimistic. Are the conceivable outcomes innovative and interesting, and will they shed novel light on brain function? Unfortunately, this approach is not encouraged by most grant agencies, but I do encourage people to think as much as they can this way. Eventually it pays off.

I also think it's absolutely crucial that neuroscience maintains some amount of research using non-standard models. I'm well aware of the big advantages of working with standard animals. On the other hand, the danger, is that we learn about a very specific animal with very specific behaviors.

But the hallmark of behavior is diversity. Evolution is about diversity. I think we need to make sure that, at least as a sanity check, we study something general across multiple animal species and focus in on the invariant properties of a certain brain area. For example, with oscillations, we find place cells, grid cells, head direction cells, etc. in the bat, similar to the rat, but we don't find oscillations, so maybe these precise oscillations are not that important. Something else may be more important there.

My advice, or my call to people considering to go into non-standard animal models or set up labs working on these animals, just like I did a few years ago, is to think very hard on which questions are you asking — and always try to connect as much as you can to the broader neuroscience field. There's a tendency among people studying neuroethology to not connect their animal to the rest of the world. As a result, there’s very few labs interested in that, and it’s very difficult to get funding and maybe to publish.

On the other hand, if you are able to make a connection to the broader neuroscience community and to the general questions that people are pursuing, then it's a great position to be in, because you're asking general questions in a very unique animal, and then the funding and publications aren’t a problem anymore. This works very well in systems like the bird-song system. People studying that are very good at connecting through to general questions in systems neuroscience. I'm trying to do that as well in the bat questions of neural coding and neural representations, for example. If you do this, then I think going to a non-standard animal model is a very good career choice.

Nachum Ulanovsky, PhD
Nachum Ulanovsky is an associate professor in the department of neurobiology at the Weizmann Institute of Science in Israel. His lab studies the neurobiology of learning and memory and the relationship between brain activity and behavior — specifically, neural activity in the hippocampus and entorhinal cortex. His lab examines key components of the brain's 'navigation circuit' — place cells, grid cells and head-direction cells — and asks questions about spatial memory and neural codes for space in 2-D and 3-D, in both crawling and freely-flying bats. He earned his BSc in physics from Tel Aviv University, obtained his PhD in neural computation at Hebrew University in Jerusalem, and completed postdoctoral training at the University of Maryland.
﻿
MORE
4 of 5 articles left
Login or Become a Member to unlock content