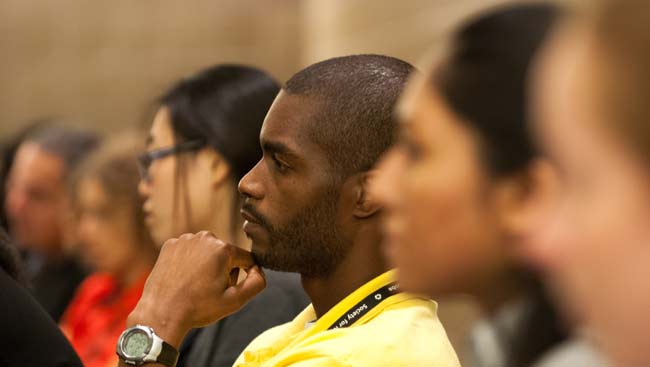 In The Hitchhiker’s Guide to a Neuroscience Career,  published in Neuron in May 2015, Marian Joëls and the other authors applaud the worldwide excitement around neuroscience and the number of people entering the field.

To help neuroscientists advance in the face of increased competition, the authors present the “critical success indicators for a career in academic neuroscience,” including mobility, networking, building a CV and seeking advice, and outreach. Here, Marian Joëls further explores these topics.

You write that being mobile — working in labs abroad — is “one of the best pieces of advice” for people to advance in their academic careers. Are there any ways people can advocate for increased investments in fellowships that facilitate mobility?

Budgets for science are unlikely to expand substantially over the next years. It should therefore be realized that if the number of fellowships promoting mobility increases, other pots of money will diminish. Still, I think we — as a community — should invest more in fellowships for young scientists that intend to make the first important steps in their career, for a very simple reason: If we do not support these people at the early stages of their careers, there is a good chance they will step out of the system and never reach the next stage. If we cut down on resources that support the base of the pyramid, we would build a system on a very small base.

Advocating for more travel fellowships requires a united voice of senior scientists, but would also be greatly aided by young neuroscientists explaining why such fellowships are so important to them. Most politicians have no idea there is a problem and, in my experience, nor do funding agencies. By clearly voicing the need for investments in grants supporting mobility of starting scientists, priorities may be placed differently than they currently are.

What do you suggest people do to grow their network of mentors given that “proactively seeking a good adviser or mentor may be the most important” step in building a strong foundation of success early in their careers?

Some universities, institutes, or PhD programs have a mentoring system in place. Make use of it! There is no need to tough it out if you face a difficult problem, for instance if you’re dealing with an unsupportive supervisor or trying to combine a family life with a successful career. Good advice usually comes for free and people who went through the same difficulties some years earlier are generally very willing to share their experiences.

If there is no mentoring program, you can approach a faculty member who you trust and connect with well. What may come as a surprise to junior scientists is that many mentors feel a sense of appreciation and even fulfillment when someone younger asks for their advice. The worst thing that can happen if you approach someone is that he or she will turn down the request, most likely because they already have too many obligations. If the first try doesn’t work out, it is not so bad; you can simply ask someone else.

Your worst enemy is shying away from asking for help. Some things are incredibly easy if you are being helped by someone more experienced, and unnecessarily some things become a real stumbling block if you try to deal with them all on your own.

Lifelong learning and the willingness to try again and again is critical for every scientist, as you explain. What advice do you have for people to increase their resilience and ability to persevere in the face of inevitable challenges?

Resilience and perseverance, to some extent, might be innate traits rather than something you acquire over time. It is like individuals growing up under adverse life conditions: Some thrive and are adamant to show they can be successful despite negative circumstances, while others succumb. That is exactly why I try to judge resilience and perseverance in junior scientists who apply for a job, next to their intellectual capacities. A brilliant person who is easily put off may have a hard time in science today. Inevitably every one of us — no matter how intelligent — will experience disappointments and things that feel unfair.

The consoling thought is that it happens to all of us. That may make it easier to swallow and accept. It is also one of the points we make in the article: there is no such thing as an easy ride, not even for the “big names.” We have all gone through difficult times. Realizing this may already help junior scientists to accept frustration and disappointment as an inevitable part of life, not just in science but in general.

Experiencing that dips are most of the time followed by peaks is an invaluable lesson that helps you get through the next crisis, as I have learned through experience.

Read The Hitchhiker’s Guide to a Neuroscience Career in Neuron for additional career advice.

Marian Joëls, PhD
Marian Joëls is professor of neurobiology of environmental factors, and dean as well as a board member of the University Medical Center Groningen, Netherlands. She obtained her PhD degree in Utrecht with David de Wied and carried out postdoctoral research at the University of Texas Medical Branch and the Scripps Research Institute. Between 1991 and 2009 she was appointed at the University of Amsterdam, and between 2009 and 2016 she served as a professor of neuroscience and scientific director of the Brain Center Rudolf Magnus at University Medical Center Utrecht. Her research focuses on stress hormone actions in the brain, with the aim of delineating the cellular and network effects of stress hormones in limbic brain regions, understanding the underlying molecular mechanisms, and examining the functional consequences for behavior, in health and disease. Her work has been published in more than 300 articles, and she currently is an ISI Highly Cited author. She is a member of the Royal Netherlands Academy of Arts and Sciences and served as president of the Federation of European Neuroscience Societies from 2012–2014.
﻿
MORE
4 of 5 articles left
Login or Join or Renew to unlock content