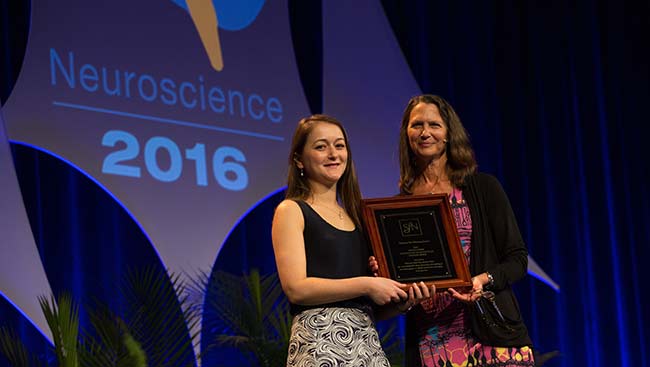 Using molecular, anatomical, and electrophysiological approaches, Sebnem Tuncdemir found that two types of interneurons form transient connections while integrating into their proper positions within the developing brain and that these ephemeral circuits are necessary for the correct assembly of the cerebral cortex. For her outstanding PhD thesis, Tuncdemir won the Nemko Prize in Cellular or Molecular Neuroscience in 2016. Here, she shares more about her research and offers advice for grad students.

When you received the Nemko Prize, former SfN President Hollis Cline noted that your “findings of how neurons communicate during assembly of the neural architecture contribute to a more complete understanding of brain development and could help to reveal how failures in these processes lead to neurological disorders.” Ultimately, what are you hoping to accomplish with your research?

Developmental pathologies of cortical interneuron populations, particularly parvalbumin-expressing interneurons, are implicated in a variety of developmental disorders, such as autism spectrum disorders and schizophrenia. My findings provide a new way of thinking about how defects in these neurons can arise. My work indicates that a temporary network template is actually set by another somatostatin-expressing type of interneuron. We found that this transient network helps parvalbumin neurons mature, and without this temporary scaffold, these cells malfunction later on. This is a novel type of cell-to-cell interaction, which may lead to the discovery of the developmental mechanism that sets the stage for psychiatric diseases later in life.

This type of basic science research could help design more realistic animal models for preclinical studies, which would increase our understanding of the dynamic changes that happen in diverse cell groups and their network interactions during critical periods of developmental disorders. Ultimately, I hope this leads to better interventions for psychiatric disorders, including precisely targeted and effective treatments.

What were some of the highs and lows that you experienced when carrying out your experiments, including in the publishing process, for your thesis work, and how did you navigate through them?

One of my best days in Gordon Fishell’s lab was when I imaged the results of my first rabies virus retrograde tracing experiment and saw for the first time where somatostatin interneurons receive their inputs. I was pleasantly surprised to see so many neurons in the sensory thalamic nuclei shining bright red like a disco ball with the fluorophores expressed by the virus that infected the presynaptic terminals of the thalamic neurons.

I knew immediately that I needed to study the thalamic inputs onto somatostatin interneurons in detail since very few labs have predicted sensory inputs onto these neurons in the adult. It was exciting to see strong labelling in young animals before they have fully mature sensory organs..

Unfortunately, a few months later, Hurricane Sandy arrived. Since our animal facility at NYU Medical Center is next to the East River, it was flooded and we lost almost all of our entire mouse colony. This was incredibly dispiriting for me and a huge blow to my research, which hadn’t yet picked up speed.

However, right after learning about the damage, neuroscience labs all over the world shipped us mice breeders, and we immediately began regenerating our mouse colony. Their generosity really lifted the spirits of everyone in the lab. Our collaborators, Ed Callaway and Martyn Goulding at the Salk Institute, also invited me to their labs to carry out some of my experiments. I am incredibly grateful that the neuroscience community stepped up to help.

Additionally, over the years, invaluable guidance from Gordon Fishell (my PI), feedback on my conference presentations, and reviewers’ comments on our papers have helped me sharpen my hypotheses on early transient interneuron circuits, which I then addressed in various experiments. It was a relatively smooth — though long and at times, stressful — process to package these arguments and experiments into a paper and thesis.

Now, as a postdoc, what types of questions are you interested in exploring, and why?

My training in Gordon Fishell’s lab gave me unique insights into neuroplastic processes that can be harnessed for treatments of psychiatric disorders, such as depression and anxiety. My interest in these treatments led me to join Rene Hen’s lab at Columbia University. She is on the forefront of efforts to understand the functional role of structural plasticity in adult hippocampal neurogenesis. In a way, I’m still studying transient circuits, but now with a focus on the neurons generated in adult brains, which represents an intriguing connection between neuronal maturation processes and psychiatric disease.

What advice would you give to grad students doing their thesis work to stay focused and resilient?

I agree wholeheartedly with advice I’ve heard often: “It’s a marathon, not a sprint.” However, now that I’m done with my doctoral studies, this advice takes on a new meaning: When you see the finish line, then it does become a sprint — and you better not be worn out for that last part.

Sebnem Tuncdemir, PhD
Sebnem Tuncdemir is a postdoctoral fellow in the Rene Hen Lab at Columbia University Medical Center. Her scientific interests include the development and function of the neocortical networks and, in particular, how the diverse populations of GABAergic interneurons, generated in the ventral subpallium, acquire their position in the neocortex and incorporate into cortical circuitry. Tuncdemir earned her PhD at New York University School of Medicine. She received her MS and BS in biology from the Schreyer Honors College’s integrated undergraduate-graduate program at Pennsylvania State University.
﻿
MORE
4 of 5 articles left
Login or Become a Member to unlock content