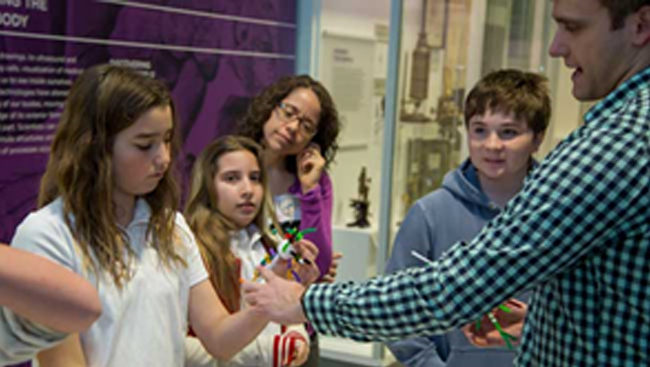 Offering kids opportunities to engage with science early on sets them up to appreciate their brains and think about neuroscience careers as they mature. In this article, Mark Williams, Anina Rich, Regine Zopf (from Macquarie University, in Sydney), and Alexandra Woolgar (from the University of Cambridge, in the United Kingdom) share three activities they used to demonstrate neuroscience concepts to kindergarteners and how they made an impact.

What happens in the brain when we see, hear, feel, taste, and smell? How should we take care of our brains so we can continue to vividly experience the world around us?

These are some of the questions we asked students during Neuroscience for Kindy Kids, a day of interactive activities to teach approximately 180 kindergarteners about attention, multisensory interaction, and adaptation in the brain. Throughout the day, we had class groups of 20–23 students rotate through 30-minute activities.

The point of these activities was to get young children to think about the brain and appreciate the complexity of everyday experiences. Knowing more about the brain promotes curiosity and increases the likelihood of making good choices, such as wearing a helmet when riding a bicycle or scooter.

To start the day, we asked students to consider the brain, their senses, and the areas of the brain responsible for primary processing of each one. Using custom-made change blindness demonstrations involving familiar Disney characters from movies such as Frozen and Toy Story, we challenged the notion we can “see” everything at the same time.

In a change blindness demonstration, two images that are identical except for one key feature alternately display with a blank screen in between. The test shows that unless one attends only to the right part of the picture, it’s impossible to tell the two apart.

The children and teachers were amazed they couldn’t identify the changes until they were pointed out, at which point the changes were obvious. We used this lesson to explain we only “see” what we pay attention to.

We also explained implications of this concept for classroom learning. For example, if you’re listening to the teacher, you won’t hear the noises outside — and vice versa.

We introduced this activity by asking, “How do you know your arm is actually yours?”

The Rubber Hand Illusion (RHI) is a classic and compelling example of how input from different senses — such as vision, touch, and proprioception — integrate, and the extent to which vision can influence our sense of body ownership.

In the RHI setup, a student’s hand is placed in a box or behind a screen, and an artificial plastic hand (such as a costume hand) is placed in front of the student. Both are stroked at the same time (we used a soft, thick paintbrush).

Many of the children were surprised by the illusion and comment on how strange it feels.

The third activity focused on the question, “Why does the ocean feel cold on a hot day?” We used this activity to emphasize the degree to which the brain adapts to our surroundings.

The activity demonstrated thermal adaptation, which occurs when the body is subjected to a temperature either hotter or colder than body temperature. After prolonged exposure, the body adapts, and the new temperature feels neither hot nor cold. We all have this experience regularly but rarely think about it.

At the end of the session, we brought the children together to review the experiments and the scientific reasons for their experiences. We then brainstormed what they can do to take care of their brains — drinking water and eating nutritious food, for example. We also encouraged them to think of questions to ask us, which we took as opportunities to expand on what they learned.

Doing simple hands-on activities allowed the kids to engage in their education. They also enjoyed interacting with the researchers. Giving them time and space to ask questions and putting the demonstrations into real-life context also added to their excitement.

By the end of the day, they understood the brain is responsible for processing sensory information and had a basic understanding of functional localization. We gave the teachers a handout of the brain with the lobes marked for the children to color in and use to continue learning about the brain.

The authors thank Lina Teichmann, Trevor Chong, and Hannah Rappaport for their help during these activities, and would like to give a special thanks to Greg Jones, principal of Mona Vale Public School, and the kindergarten teachers for their enthusiastic support for bringing neuroscience into the classroom.

Mark Williams, PhD
Mark Williams received his BS in physiology and psychology and his PhD in medicine at Monash University.

Anina Rich, MPsych, PhD
Anina Rich is a professor in the Department of Cognitive Science at Macquarie University. She is fascinated by the human brain and the way in which it creates a wealth of human experience, which is reflected in her research.

Regine Zopf, PhD
Regine Zopf is a postdoctoral research fellow in the Department of Cognitive Science at Macquarie University. Her research investigates the fundamental links among body, mind, and brain that define us as humans, including our interactions and psychological well-being.
﻿
MORE
4 of 5 articles left
Login or Become a Member to unlock content