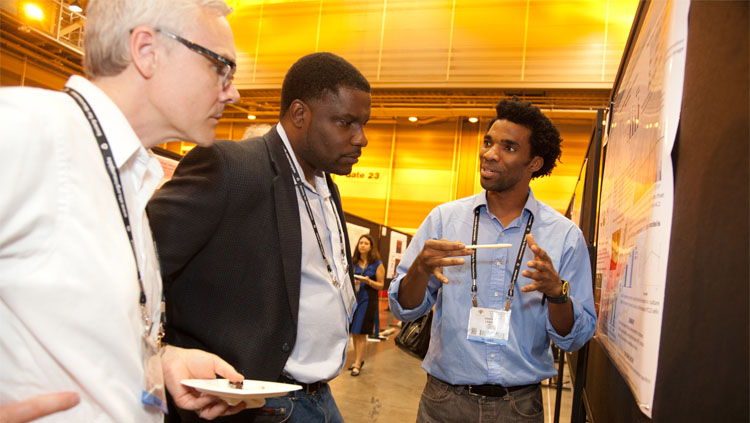 Gentry Patrick is the director of mentorship and diversity at the University of California at San Diego. Patrick serves as an active mentor for underrepresented student researchers and advocates for the convergence of diversity and academic excellence. Through his own efforts and experiences, he understands the importance of strength in numbers for change to take effect in the scientific community. In the interview below, learn how he continues to educate others to use their platform as science educators to empower young scientists.

Can you share a little bit about your background and work at UCSD?

I grew up in Compton and Watts in Southern California. I didn't really know what science was other than what you see in the media.

I went to a school in Watts called King/Drew Magnet High School of Medicine and Science. I was fortunate that they provided access to internship opportunities, but the experience was isolated in the sense that I didn't really have a team of people helping drive my STEM identity – they just plopped an inner-city kid into this scenario and hoped for the best. I don't think I was driving my own STEM identity at that point either, but I was definitely beginning to buy-in and engage during this opportunity.

Eventually, I went on to work for Li-Huei Tsai as one of her first graduate students. I remember a conversation with Li-Huei when one of the manuscripts we submitted became an article. She said, "Gentry, this is the beginning of your career." I didn't really understand that, but I was listening.

Throughout my career, I've tried to be a good mentor and advocate. I've always been involved in diversity and inclusion from day one, even as a postdoc, and now here at UCSD.

I became the director of mentorship and diversity at UCSD. I was also the associate director of the Neuroscience Graduate Program, and continue to lend my voice and experience to various initiatives.

Have you seen changes in the way the scientific community has tackled diversity and inclusion?

Diversity and inclusion have always been part of my career. Now, I feel like this moment is an awakening, where there is an activation of energy and buy-in from everyone else. I've had many colleagues over the years say, "Gentry, I don't know what to do. Tell me what to do." Now they are saying, "You know what? I know what to do."

I've had conversations with many people from different walks of life who consider me an anomaly. The first step is to eliminate the idea that individuals coming from underserved communities are anomalies. These individuals have just as much value to science, their communities, and making the world around them a better place.

What steps can institutions and organizations take to support students from underserved communities?

It's very simple: we have to advocate and open pathways for young people.

The way that we support students from underserved populations is not a one off. You cannot have a student sitting there one time and think that's going to be the activation energy to take them from an inner-city scenario all the way to full professor. You must give them many iterations of that access and encourage them to drive their own STEM identity.

STEM identity is important – it's why you can consider yourself a contributor and a part of a community. I hope SfN and other entities start to look at underserved communities, like the community I came from, as equal players and contributors. You have to go into a community and tell kids why their genome means something and why they should want to contribute to and be a part of science.

What role do professors and other senior researchers play in supporting their underrepresented trainees?

You never know the impact that you can have in someone's life. My past mentors all know it because I've profusely told them over the years, but you just never know who you're going to impact. As scientists, many of us want to find the solution: you put this in, you get this out. It can be empirical, and we can assess it and look at the outcomes from many different vantage points, but we must make sure the student is at the epicenter of all of this.

In fact, you must lead the students and clear the path ahead of them. You do this strategically by providing scholarships and making sure there is a mentorship in place – make sure that they have opportunities to build their identity. This doesn't just apply to undergrads and kids beginning to build their STEM identities. It's also important for graduate students and postdocs to know there's a community creating opportunities for them.

I have faculty who are so activated now here at UCSD. When they know that they have minority students in their class, they send an email to each one of them saying, "Hey, just want to let you know I'm here, please come chat with me. I'd love to connect with you and see what your plans are." And you know what? That small gesture may be what keeps those students in science.

What advice would you give to students, particularly underrepresented students, who are still building their STEM identity?

I would tell students to communicate. I would also tell them to make sure they are listening – learn from people and their experiences. Also don't do things prescriptively, don't take your life and career as checking boxes. We create amazing scientists by taking them by the hand, guiding them along, and showing them how we do this.

Gentry Patrick, PhD
Gentry Patrick is a professor of neurobiology at the University of California, San Diego. Patrick's research is focused on how synaptic activity modulates the molecular make-up of synaptic connections in the mammalian central nervous system.
﻿

More in This Collection
Stories from STEM: Highlighting Underrepresented Researchers
MORE
4 of 5 articles left
Login or Join or Renew to unlock content