Why I Teach With a Neurologist 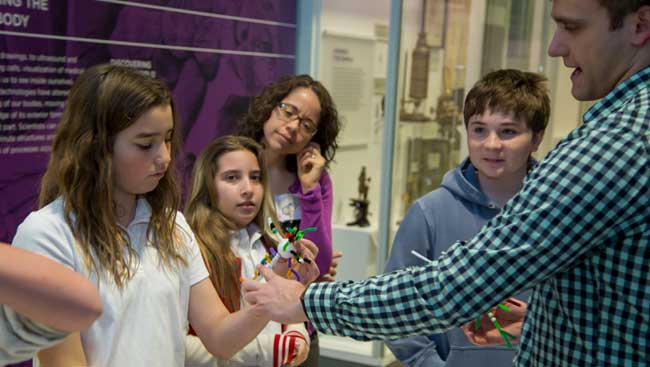 Editor's note: The following post is the first of a pair of short essays about interdisciplinary teaching that will be featured on The Neuroethics Blog. Also read Krish Sathian's, MD, PhD, article, "Why I Teach With an English Professor."

It is often said that academic fields are becoming increasingly segregated as specializations develop more jargon and become more detailed with each new peer-reviewed paper. However, the classes co-taught by Professors Otis and Sathian are unique interdisciplinary spaces where students across traditional disciplinary divides are able to wrestle with topics shared by the humanities and sciences: perception, imagination, and art.

Is this kind of interdisciplinary inquiry a necessary counterbalance to the segregation of the disciplines? Or even part of the ethical practice of science? Might having more classes like this improve the scientific literacy of those in the humanities, and keep scientists in touch with the depth of expertise that other fields can contribute? Should we begin to find ways to institutionalize more of this type of work into the higher education system, or provide more movement between the disciplines? Or is interdisciplinarity merely a fad and a buzzword? Readers: what do you think?

In teaching, there are few things worse than realizing you’ve told your students something wrong. The jolt may come a year or five years down the line, but you can’t issue a retraction.

It’s been thirty years since I studied neuroscience at the University of California, San Francisco, and a few things have changed since then. The human genome has been sequenced. Scientists analyze data on computers. I try to keep abreast of what’s happening, but it’s hard while teaching Victorian literature. In this climate of near-worship for neuroscience, I worry that I could say anything about the brain, and people would believe me. With a neurologist in the room, this can’t happen.

At Emory University, Krish Sathian and I have taught two courses together: “Images, Metaphors, and the Brain” and “Language, Literature, and Mental Simulation.” We were blessed with a mix of bright, open-minded graduate students in neuroscience, psychology, English, and comparative literature, as well as some gifted undergraduate neuroscience majors.

Nothing dissolves stereotypes like familiarity, and it did all of us good to exchange ideas with intelligent, well-informed people who saw the world differently. Professor Sathian was a vital role model for the students in English, since this high-energy person who healed patients, ran a lab, and wrote grants knew a great deal about literature and was eager to learn more. He saw it as related to his work.

In our two courses, we read scientific and literary works that explored creative metaphors and sensory imagery. We studied Dedre Gentner’s “career of metaphor” theory in parallel with Jean-Dominique Bauby’s The Diving Bell and the Butterfly, and Italo Calvino’s Invisible Cities with David Kemmerer’s “The Semantics of Space.”

I learned the most from the course when the students disagreed, and I think that they did as well. People came head to head over the issue of whether science is a cultural narrative or an all-out effort to learn how the world works. In these situations, it was helpful to teach with a colleague who is a doctor as well as a scientist. Before coming to class, he had worked for hours in a place where “aphasia” and “paralysis” aren’t just words. Professor Sathian’s clinical experience, as well as his work as an experimentalist, helped those from other fields to appreciate what scientists do.

When I did make a mistake, Professor Sathian corrected me tactfully and unhesitatingly. Our aim was to teach, not perform, and our “hybrid” courses on metaphors and imagery have given me some of the best teaching experiences I’ve ever had.

I urge everyone in the humanities to try teaching with a scientific colleague. In my experience, scientists are eager to learn from scholars whose critical eyes scan language and culture. Aren’t all of us trying to figure out how the world works?

Laura Otis, PhD
Laura Otis is a professor of English at Emory University. She obtained a PhD in comparative literature. She holds a BS in molecular biophysics and biochemistry and an MA in neuroscience, and she worked in research labs for years.
﻿
MORE
4 of 5 articles left
Login or Become a Member to unlock content