What Happens to Neural Dynamics When a Rat Emits Ultrasonic Vocalizations? 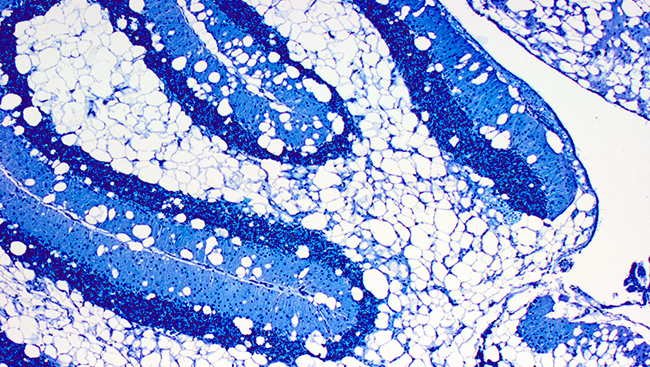 What happens to our brain when we scream? We addressed this question in rats that emit ultrasonic vocalizations when confronted with an aversive or frightening event.

When you hit your toe against the corner of your bed, you feel a sharp pain that may make you scream or swear. In the same way, you may become startled and scream when a barking dog suddenly jumps up from behind a fence next to you.

Vocalizing when exposed to the stimulation of a frightening event is highly conserved throughout the animal kingdom. For instance, when a rat faces a danger, like an encounter with a predator or an aggressive conspecific, it vocalizes in the audible range and in the ultrasonic range (22kHz). These ultrasonic vocalizations reflect a negative emotional state and belong to the rat’s fear response repertoire.

Fear behavior depends on interactions between the medial prefrontal cortex (mPFC) and the basolateral amygdala (BLA), and involves synchronized activity in theta and gamma oscillatory activities in these brain areas.

In addition, freezing in place, the most classical measure of fear response in rodents, temporally coincides with the development of sustained 4-Hz oscillations in prefrontal-amygdala circuits. Recent studies have shown these oscillations depend on the animal’s respiratory rate, supporting the growing body of evidence pinpointing the influence of nasal breathing on brain rhythms.

The aim of our study was two-fold: first, to investigate whether ultrasonic vocalizations induce specific changes in oscillatory activities in the fear neural network of the vocalizing animal, and second, to assess to what extent these changes are related to changes in breathing rhythm.

To address these questions, we trained rats in a fear conditioning paradigm, in which a given stimulus (an odor) signaled the arrival of a foot-shock a few seconds later. Fear conditioning is a widely used task in the literature of fear memories in animals, and this paradigm readily induces ultrasonic vocalizations in rats.

Using wireless electrophysiological recording, we monitored local field potentials (reflecting the activity of populations of neurons) simultaneously in BLA, mPFC, and olfactory cortex in rats engaged in odor fear conditioning. Training was conducted in an experimental cage allowing monitoring of ultrasonic vocalizations, overt behavior, and respiration.

We then assessed whether the frequency of oscillatory activity in the delta and theta range follows breathing frequency (which can vary from 0.5–10 Hz), and if it does, whether ultrasonic vocalizations emission disrupts this coordination. We showed during silent sequences, breathing rhythm is coupled with delta oscillatory activity in the recorded network. This coupling fades away during ultrasonic vocalizations.

What could be the adaptive value for an organism to vocalize when feeling sudden pain or fear? Screams of fear in humans contain much higher levels of roughness than normal sounds and activate the fear circuitry of the brain of listeners. Rats’ ultrasonic vocalizations have similar consequences and have been suggested to play the role of alarm calls to warn conspecifics about external danger. Thus, screaming in humans, akin to ultrasonic calls in rats, may serve to increase alertness and convey danger to conspecifics.

Screaming may also have an adaptive value for the individual doing the screaming. In humans, a recent study in which subjects were asked to immerse their hands in painfully cold water showed the subjects were able to tolerate the pain longer when they were allowed to vocalize their suffering. Thus, screaming might be a way to attenuate pain, which could be achieved through a competition between sound production pathways and pain-related neural processes.

We propose that ultrasonic vocalizations and their particular respiratory pattern associated with a specific combination of brain oscillatory activities, might enhance plasticity in brain structures of the fear network and ultimately strengthen fear memories. Additional experiments are needed to explore the causal link between ultrasonic vocalizations-related changes in oscillatory activities and fear memory.

Our work provides new insights on how social vocalizations and respiratory rhythm collectively influence coordinated brain activity during defensive and emotional states. A better knowledge of the impact of 22-kHz ultrasonic vocalizations on brain neural dynamics is also particularly relevant for rodent models of human neuropsychiatric disorders, for which socio-affective communication is severely impaired.

In addition, the present finding that respiration changes induced by ultrasonic vocalizations relay some of the observed correlates on brain oscillations adds novel and original information on the role of nasal breathing in the orchestration of brain rhythms.

Maryne Dupin
Maryne Dupin is a PhD candidate at the Lyon Neuroscience Research Center, in France.
﻿