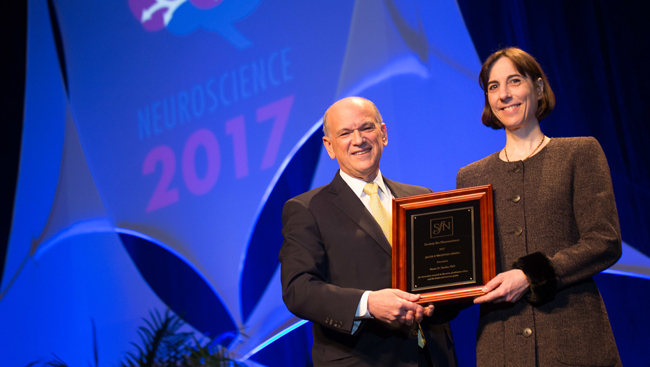 Karen Ersche’s work focuses on the neurochemical processes underlying addictive behavior and how to translate these findings into therapies. Her findings have contributed to new behavioral and pharmacological approaches. For this work, she was awarded the Jacob P. Waletzky Award in 2017.

What led you to study drug addiction, particularly cocaine addiction?

My enthusiasm for drug addiction research is rooted in the potential it has to make a difference in people’s lives. Scientific advances have fundamentally changed the understanding of addiction from a deficit of character to a brain disorder, and I strongly believe it will also provide the pathway for developing more effective treatments.

My research aims to tackle the problems surrounding cocaine addiction, which is a fairly common disorder in the United Kingdom with few effective treatments.

Which discoveries or new insights from your work have most excited you and why?

Drug addiction is an illness that causes a lot of harm to everyone involved. Yet, that pain and damage doesn’t seem to deter users. In fact, many drug users report continuing to use drugs even though they don’t enjoy them like they used to. Warning users about the negative consequences of their drug use isn’t enough to change their behavior.

This contradiction can fuel frustration and resentment against people who have developed drug addiction and makes it challenging for clinicians to treat addicted individuals.

Because of that, I’ve been excited some of my recent work has helped to shed light on the possible mechanisms underlying the persistence of cocaine use in cocaine-addicted individuals.

Science recently published one of your studies that has new scientific insight into why cocaine addiction is so difficult to treat. What approach did you use in your study, and what did you find?

We all know that old habits die hard, but drug-taking habits die even harder. The long-term use of drugs, particularly stimulant drugs, such as cocaine, crack-cocaine, and methamphetamines, weakens the brain’s ability to deliberately control behavior.

Using behavioral tasks, we investigated how participants learned to respond advantageously in changing situations, and saw that people with cocaine addiction responded very differently compared to their healthy peers.

When their actions were rewarded, cocaine-addicted individuals quickly switched into autopilot mode and continued the behavior they’d been rewarded for, even when it no longer made sense.

In other situations, cocaine-addicted individuals would receive electric shocks unless they pressed a lever, but many didn’t bother. The prospect of something bad happening to them didn’t motivate them to do something about it, unlike their healthy peers.

Some of our more recent work, which is not yet published, further suggests when negative consequences occur, cocaine-addicted individuals don’t seem to regret what they’ve done.

On the one hand, this work demonstrates reward and punishment techniques that would shape the behavior of most people aren’t effective in people who are addicted to cocaine. On the other hand, it shows cocaine-addicted individuals are particularly susceptible to developing habits and not just those related to drug-taking.

Treatment approaches aiming to change cocaine users’ behavior will have to take these findings into account to enhance their effectiveness.

What are the current challenges and next questions you’re working to solve?

The next challenge is to translate these findings into a therapeutic intervention. I am now developing a novel psychological treatment. It takes the neuropsychological profile and abnormal brain function of cocaine-addicted individuals into account and turns their propensity towards habit into a strength that facilitates recovery.

What are your ultimate hopes for research in addiction?

The stigma associated with chronic drug use is particularly concerning to me. Although science has gone a long way in elucidating the neurobiological, psychological, and social factors underlying addictive behavior, this knowledge hasn’t yet reached the general public, nor provided effective treatments.

Many people still regard drug addiction as a moral failure, rather than a medical disorder. Scientific research is important because it explains how addiction develops and contributes to effective ways of treating it.

Improving treatment and preventing the development of addiction in vulnerable individuals are the real challenges for additional research. I’m confident that in the not-too-distant future, treatments will be tailored more closely to patients’ needs, making a real difference in people’s lives.

My hope is we can take our findings to the public and into clinics and show addiction recovery is possible in order to put an end to the stigma that undeservedly besets those affected by this disorder.

Do you know someone who may be eligible for the Jacob P. Waletzky Award or other awards in SfN’s Outstanding Research and Career category? Learn more about eligibility and nominate someone by June 1.

Karen Ersche, PhD
Karen D. Ersche is an associate professor at the University of Cambridge, a member of the Behavioral and Clinical Neuroscience Institute, and an Official Fellow at Clare Hall College in Cambridge. Her field of interest and expertise lies in human drug addiction. Ersche carried out research as a Betty Behrens Fellow prior to being appointed to a lectureship at the University of Cambridge in 2014. She advocates for issues of drug addiction as a member of the Scientific Advisory panel to the European College for Psychopharmacology. Her research combines a variety of different approaches and collaborations with other disciplines to assess a broad range of effects of drug abuse on individuals’ health and wellbeing. Ultimately, Ersche’s goal is to enhance progress of addiction recovery by developing more effective treatments and reducing the widespread stigma attached to the disorder. She holds an MA in psychology from the University of Konstanz, a MSc from the University of Exeter, and a PhD from the University of Cambridge.
﻿
MORE
4 of 5 articles left
Login or Become a Member to unlock content