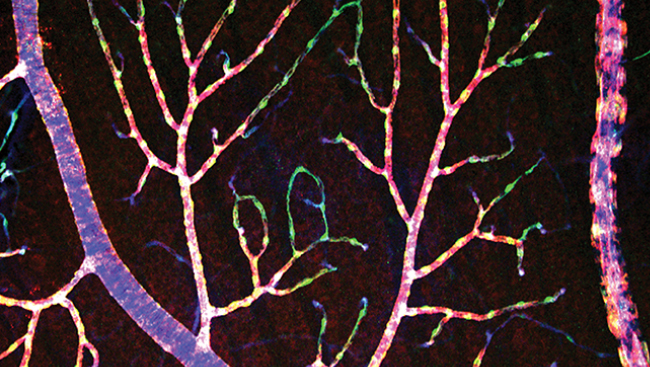 We have begun to investigate the function of Shh in cultured hippocampal neurons. We chose this model system because the developmental landmarks of a typical neuron — from outgrowth of axons and dendrites to formation of synaptic contacts — are preserved. And, in cultured neurons, the Shh receptor, Patched, and its transducer, Smoothened (Smo), exhibit preferential localization in the dendrites of the neurons, a pattern that faithfully represents their apparent distribution pattern in the hippocampal neurons in vivo. Furthermore, adding bioactive Shh to cultures reliably and robustly up-regulates the Shh pathway activity in these neurons, thus allowing the study of changes elicited by increased Shh activity.

Our previous study of hippocampal neurons showed that up-regulated Shh activity accelerates the development of both the architecture and the function of presynaptic terminals. Would the Shh signaling pathway also affect the growth of younger neurons — that is, before development of the synapse?

To address this question, we recently set out to investigate young neurons at an age when the axons and dendrites are just beginning to grow. We found that enhanced Shh activity caused young neurons to grow markedly longer axons, yet did not noticeably affect the dendrites — at least not their length. What’s more, this axon-elongating effect depended on the transducer Smoothened and the transcription factor Gli1.

Many neurotrophic factors act directly on axons to regulate their growth. We wondered if this is the case for our observed Shh-induced axon elongation. To address this question, we utilized a compartmentalized system in which bioactive Shh was added exclusively to either the somatodendritic side or axonal side of the neurons. Notably, Shh-elicited axon elongation occurred only when Shh was added to the somatodendritic compartment and not when it was added to the axonal compartment. This suggested that Shh signaling is initiated at the soma and/or dendrite of the neuron.

Because trafficking of Smo, the key signaling transducer, to and from the primary cilium is thought to be essential to Shh signal transduction in all mammalian cells, we next investigated the distribution and trafficking behavior of Smo molecules in neurons. Immunoelectron microscopic analysis of the hippocampus revealed intimate associations between endogenous Smo molecules and several types of signaling and trafficking organelles such as endosomes and clathrin-coated vesicles. We also used fluorescence microscopy to analyze cultured neurons that express fluorescently tagged Smo.

We found that in the control neurons with basal Shh activity, Smo molecules were often concentrated in the primary cilium. However, in the Shh-treated neurons with elevated Shh activity, a large number of Smo molecules spread into the dendrites, where they co-existed with endosomes and moved actively in directions both to and away from the soma. It is possible that in neurons, the dendrites and/or dendritic spines serve as a Shh signaling center in a way analogous to the function ascribed to the primary cilia in non-neuronal cells. This should be an exciting topic for future studies.

Initial microarray analysis revealed an elevated level of profilin1 mRNA in Shh-treated neurons. Further analysis showed that profilin1 protein level increases in parallel with rapid axon growth of the neurons, yet experimentally adding Shh to the neurons led to a still further and significant increase in profilin1 protein abundance. Profilin1 is best known for its role in regulating actin polymerization, which is essential for axon growth. Therefore, it seems logical to hypothesize that profilin1 is an essential mediator for the observed Shh-stimulated axon growth.

We investigated this idea by examining the neurons in which either the profilin1 protein level was reduced or the ability of profilin1 to interact with actin was disrupted. We found that neurons with deficient profilin1 no longer exhibited longer axons in response to added Shh, supporting the idea that profilin1 is important for the accelerated axon growth induced by experimentally elevated Shh. Notably, however, in control neurons — neurons that had basal Shh activity but did not receive experimentally added Shh — reduction or disruption of profilin1 did not visibly affect basal axon growth, suggesting that profilin1 is not strictly required for axon growth that depends on basal endogenous Shh signaling activity.

Clearly, although our work is among the first to demonstrate some of the functional roles that the Shh signaling pathway plays in hippocampal neurons, there are many unsolved, yet interesting, questions. For instance, how is endogenous Shh signaling activity controlled in the hippocampus? Is the endogenous Shh activity level regulated by the mechanisms that have been implicated in regulating other signaling pathways? Does neuronal activity affect Shh level in the hippocampal neurons as it was reported in a neuronal cell line?

Pamela J. Yao, PhD
Pamela Yao is a senior scientist at the Laboratory of Neurosciences in the National Institute on Aging. Her work focuses on studying the normal functions of signaling pathways in establishment and maintenance of neural circuits in developing brains, and the pathological roles of these signaling pathways in age-related neurological disorders.
﻿