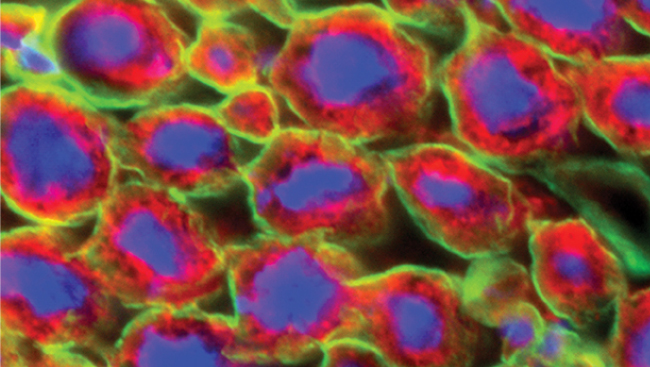 Mutations in the gene that encodes triggering receptor expressed on myeloid cells 2 (TREM2) were originally discovered in patients with a very rare form of inheritable dementia. TREM2 is a transmembrane protein expressed on the surface of microglia, the cells that function as macrophages in the central nervous system (CNS).

The receptor senses lipids and has multiple downstream effects, including increased calcium signaling and remodeling of the cytoskeletal protein actin. Now, researchers are investigating a role for this receptor in Alzheimer’s disease (AD).

Though scientists know from studies of the genomes of people with AD that TREM2 may be involved, it has been difficult to understand the connections between genetic evidence, microglia function, and neurodegeneration. Work in mice suggests TREM2 dysfunction renders microglia less responsive to the brain lesions associated with AD, which are made of a protein called amyloid-beta (Aβ), and that TREM2 may play a role in many functions of microglia.

Though these studies show TREM2 is important for microglia function, understanding how the receptor affects recognition of Aβ lesions is still unclear and researchers have proposed several possible mechanisms.

In one model, TREM2 is necessary for phagocytosis and helps control inflammatory response. Another model suggests signals initiated by TREM2 maintain activation and survival of microglia. A third model proposes white blood cells are recruited into the CNS based on their expression of TREM2, where they can then help with Aβ plaque removal. Finally, TREM2 could delay microglial aging, allowing immune cells to function at full capacity for an extended period of time.

Regardless of the way in which TREM2 exerts its influence, research has shown that TREM2-associated changes largely occur in the hippocampus. In addition, cleavage of the extracellular loop of TREM2 may play a role in AD progression, although exactly how it might do so remains a question for future research. This extracellular loop is soluble and can be detected in cerebrospinal fluid, suggesting that it could potentially be used as a clinical readout for microglia activation.

Another growing area of research is focused on potential interactions between TREM2 and other immune- or AD-related genes. For instance, studies have shown that a genetic variant of CD33, another microglia-expressed receptor, can increase AD risk and that this variant is also associated with increases in TREM2 expression in white blood cells. These findings raise the possibility that CD33 and TREM2 function in a pathway together. Additionally, because TREM2 senses lipids, it could interact with AD-associated lipid metabolism factors.

Findings from human genetic studies suggest that TREM2 may also play a role in other neurodegenerative diseases, including Parkinson’s disease and amyotrophic lateral sclerosis. Studies in mice point to possible functions for TREM2 in an even wider variety of pathologies, such as stroke, autoimmune encephalitis, and demyelination.

On the whole, evidence from animal studies and genome-wide association studies points to TREM2’s importance in microglial function in the CNS. Directions for future research include solving TREM2’s protein structure, better understanding how it binds lipids, and investigating its possible therapeutic uses in AD.