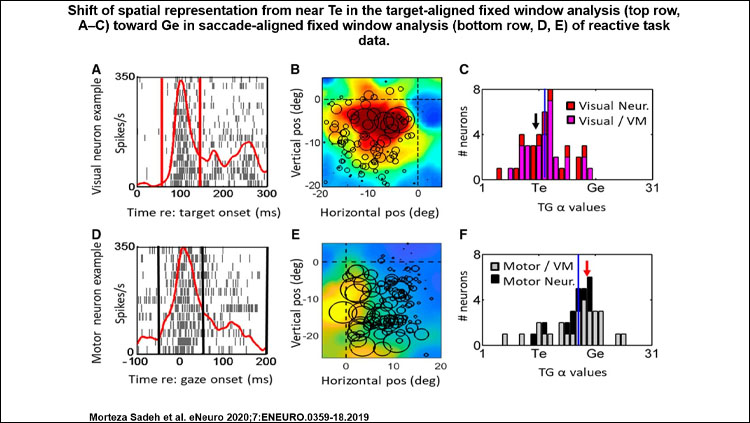 In this study we asked how the superior colliculus, a structure located on the roof of the midbrain, contributes to the transformation of visual signals to motor commands for ordinary “reactive” gaze shifts of the eyes and head, made directly to a suddenly appearing target.

The superior colliculus (SC) is perhaps the most studied part of the gaze control system, for its role in producing both saccades and head-unrestrained gaze shifts.

To understand its role in converting vision to action, oculomotor physiologists have recorded from SC neurons in various ingenious paradigms (memory delay saccades, anti-saccades, double step saccades). These experiments suggest that the superior colliculus is involved in transforming retina-centered visual signals into gaze commands, but they introduce signals and transformations that are not present in ordinary gaze shifts. They also involve training that might actually change the system.

Here, we applied a newer analysis technology to ordinary “reactive” gaze shifts and found that the SC rapidly (i.e., within 200ms) transforms retina-centered visual signals into gaze direction-related motor commands, and that this involves the accumulation of neural noise across all SC cell types.

We recorded from SC neurons while two monkeys made gaze shifts from a central fixation point toward targets flashed across each neuron’s response field (the area of space that causes the neuron to become active). Animals were rewarded even when they made small, variable gaze errors.

We then selected the point along this continuum that gave the best fit. We did this through brief steps in time from the initial visual response until the time of the actual gaze movement.

Finally, we divided these neurons into visual (only responding to the stimulus), motor (only responding at the movement), and visuomotor (both responses) in order to perform statistics on these populations.

It can be difficult to distinguish between visual and motor responses during reactive gaze shifts, because this happens so quickly that the signals overlap and flow together. We found this too, but when we analyzed data recorded 80-180ms after the visual stimulus, response fields aligned best with target locations, whereas when we fit data recorded 50 ms before to 50ms after the gaze shift, the response field fits aligned best with future gaze direction.

To understand when and how this happens, we did our fits through time on each neuronal population. We found that overall, there was a rapid, continuous transition from target coding to gaze coding in the brief period proceeding each movement. This transition was observed in all cell types (which we identified using a different “memory delay” paradigm), beginning with the earlier responses of visual neurons, proceeding continuously in visuomotor cells, and completing in motor cells.

These findings directly show what has only been inferred previously: The superior colliculus engages in a spatial transformation from visual target direction to gaze direction commands during ordinary gaze shifts.

Further, it does not appear that this happens as a relay between cells with fixed spatial codes. Rather, our data indicate that this is a distributed process that involves cells types active at different times. Because we ultimately distinguished visual from motor codes based on small, variable errors in gaze behavior, this suggests that the SC plays a role in introducing these areas, likely in connection with other cortical and brainstem networks.

This also suggests that this noise might be a biomarker for the health of the system, an area of research we are actively pursuing now with neurosurgeons, using recording from human patients with neurological disorders.