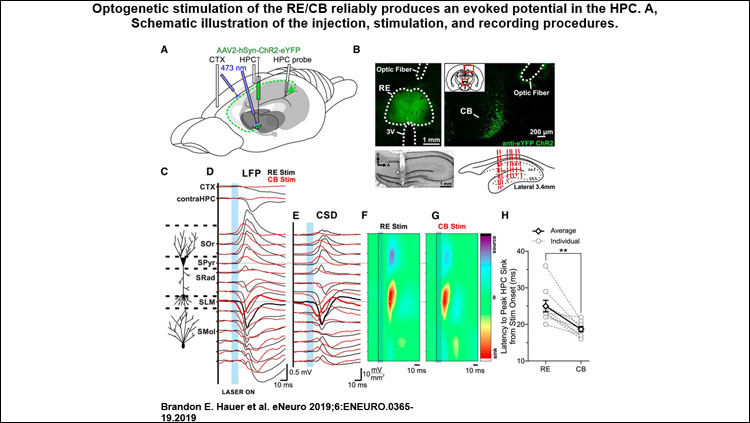 Material below summarizes the article The Reuniens Nucleus of the Thalamus Has an Essential Role in Coordinating Slow-Wave Activity Between Neocortex and Hippocampus, published on September 23, 2019, in eNeuro and authored by Brandon E. Hauer, Silvia Pagliardini, and Clayton T. Dickson.

Slow waves during sleep benefit our memories for personal experiences, likely by coordinating two distant regions important for memory formation, the prefrontal cortex and hippocampus. But how are these two areas synchronized? Is the nucleus reuniens, a disynaptic node connecting them, the missing link in this sleep-dependent slow-wave memory circuit?

Slow oscillations (SO) are a prominent feature of deep sleep and have been demonstrated to benefit memory consolidation. More specifically, it may be the coordination of these slow oscillations across the brain, and in particular between PFC and HPC, that could underlie this memory boost.

The RE sits in a nodal region interfacing PFC and HPC, both anatomically and functionally. The RE has also increasingly been implicated in a variety of memory tasks.

We theorized that this RE-mediated memory function may be a consequence of its ability to dynamically synchronize the PFC and HPC at SO frequencies. Given that the PFC does not project directly to the HPC, we needed to demonstrate first that the RE exhibits SO activity, and then that this activity is functionally critical to SO synchronization between PFC and HPC.

Experiments were conducted on 33 adult male rats. Many rats first had either opto- or chemogenetic viruses injected into the RE for subsequent stimulation or inhibition, respectively. During subsequent electrophysiological experiments rats were anesthetized with urethane, given that it is a highly tractable (and widely used) model of natural sleep, spontaneously alternating between activated (REM-like) and deactivated (nonREM-like) states. During deactivated states, the SO is a prominent feature of activity in both PFC and HPC.  In all situations we recorded ongoing SO activity in PFC and HPC.

Unit recordings in the RE were performed and analyzed to assess rhythmicity and coupling to the SO in PFC. In addition, the effects of RE or PFC stimulation on HPC were compared. By inactivating RE we were able to characterize changes in PFC-to-HPC coupling using active stimulation as well as coherence measures for the SO itself.

We first demonstrated that RE units oscillate at SO frequencies, and were coupled to the negative phase of the ongoing PFC SO (Figure A). This rhythmicity was state-dependent, as during activated (REM-like) states, the RE exhibited tonic firing. Multi-unit recordings confirmed that this SO coupling was a population phenomenon in the RE as well. Thus, the RE could act as an intermediary in SO communication from PFC to HPC.

Optogenetically activating RE neurons or their efferent axons in the cingulum bundle evoked a prominent and unique potential in the HPC. This effect was maximal in the cell layer where the RE has been previously shown to project most strongly. A similar, albeit longer-latency, response with the same unique features could be evoked by PFC stimulation as well.

Chemogenetic silencing of the RE robustly impaired the evoked response in HPC following PFC stimulation, suggesting that inactivation of the RE functionally impairs the dialogue between these two sites (Figure B). Critically, RE inactivation substantially reduced coherence at SO frequencies between PFC and HPC, without impacting SO power at either site.

We correlated these two findings, demonstrating that the degree of evoked peak reduction was positively and linearly related to the subsequent decrement in SO synchrony, in the same rats. That is, the more robustly the RE is inactivated, the more impoverished PFC-HPC dialogue is, and the more decremented SO synchrony between these two sites is.

This demonstrates that the RE is a critical relay node, essential for coordinating SO activity between PFC and HPC.

Demonstrating a role for the RE in forebrain SO coupling suggests that it may be fundamental for slow-wave sleep-related episodic memory consolidation. It is the entrainment of the RE that relays SO information from PFC to HPC, which appears essential for the phase-coupling of the two sites. This synchronizing influence may be critical to slow-wave related memory enhancements.

Future work should assess the role of SO activity specifically in the RE for underlying memory consolidation in tasks requiring episodic memory. We believe it is the state-dependent SO activity of RE neurons that helps to bind PFC activity with that in the HPC.

Brandon Hauer
Brandon Hauer is a PhD candidate in Neuroscience at the University of Alberta, in Canada.

Clayton Dickson, PhD
Clayton Dickson is a professor of psychology and physiology and is the associate director of education at the Neuroscience and Mental Health Institute at the University of Alberta.
﻿