The Drowsy Effect of Sugar 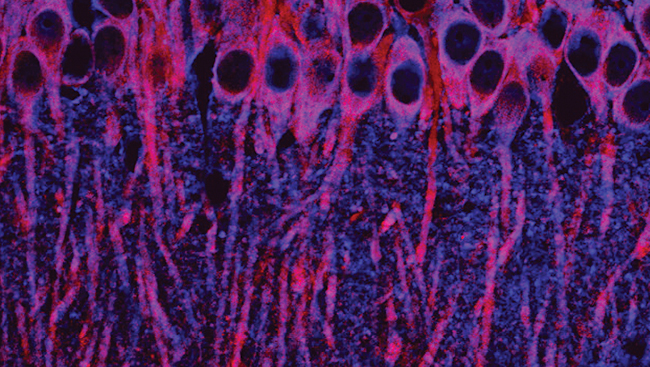 Many people chronically suffer from sleep disorders that hinder daily functioning and adversely affect health and longevity. Despite the discovery of some basic neurobiological concepts, the cellular and molecular mechanisms involved in sleep promotion and in the coordinated succession of behavioral states remain largely unknown and are the subject of intense research. Better understanding of these physiological regulations is a challenge for contemporary neuroscience.

In mammals, sleep is divided into non-rapid eye movement (NREM) sleep and rapid eye movement (REM) sleep. Many studies have uncovered the ventrolateral preoptic nucleus (VLPO) in the anterior hypothalamus as the main cerebral structure containing neurons responsible for the onset and maintenance of NREM sleep.

These neurons are GABAergic and promote NREM sleep through an inhibition of the major arousal systems in the brain. Previous studies led to the ex vivo characterization of these VLPO sleep-promoting neurons. These neurons display a potent low threshold calcium spike (LTS) and are inhibited by arousal neurotransmitters such as noradrenaline (NA).

Therefore, the inactivity of VLPO sleep-promoting neurons during waking is caused by a tonic inhibition by several wake-promoting neurotransmitters. This “reciprocal inhibitory interaction” is a key factor in sleep promotion.

However, the cellular and molecular mechanisms responsible for their activation at sleep onset remain poorly understood. A well-admitted hypothesis is that a role of NREM sleep would be to replenish energy stores that were depleted during the previous wakefulness.

Therefore, vigilance states could be directly modulated by a metabolic drive. In mammals, variations in energy intake, in particular glucose intake, can modulate vigilance states. Wakefulness is reduced after a meal while it is increased during fasting. Moreover, metabolism-related compounds such as glucose, glycogen, lactate, or ATP have been shown to fluctuate over vigilance states.

Despite studies clearly demonstrating that glucose can directly inhibit wake-promoting orexinergic neurons, no investigation has yet attempted to assess the impact of metabolism on the excitability of neurons responsible for the onset of sleep such as VLPO neurons.

In our study, we examined if glucose can modify the sleep-waking cycle when infused into the VLPO of mice chronically equipped for polysomnographic recordings. We found that this treatment significantly promotes sleep during the first two hours following glucose injections. A severe reduction in waking amounts and a shortened sleep latency accompany this somnogenic glucose-dependent effect. Furthermore, we found that this glucose infusion significantly increases the expression of c-Fos, an indirect marker of neuronal activity, selectively in the VLPO. Taken together, these physiological and functional data strongly suggest that VLPO sleep-promoting neurons could be activated by glucose treatment.

In order to determine how glucose can modulate the activity of VLPO neurons, we performed ex vivo electrophysiological experiments. We showed using patch-clamp recordings from mice brain slices that VLPO neurons exhibiting properties — presence of LTS and inhibition by NA  — of sleep-promoting neurons  are selectively excited by glucose within physiological range. These results provide evidence that sleep-promoting neurons can be considered as glucose-sensing neurons.

We further show that this glucose-induced excitation implies the catabolism of glucose into neurons, leading to a closure of ATP-sensitive potassium channels (KATP). These channels couple energy status to neuronal excitability: Glucose enters into the cells through specific transporters, and its catabolism increases intracellular ATP that, in turn, inhibits KATP channels inducing an excitation.

This revealed mechanism regulating the activity of VLPO neurons emphasizes the perspectives of a fundamental link between sleep and metabolism. High-energy stores would be important to maintain an excitation of VLPO sleep-promoting neurons, required to trigger and maintain NREM sleep.

Conversely, we would expect that a reduction in energy supplies in the VLPO could decrease the firing rate of these cells, and would thus facilitate awakening. This glucose-induced excitation of sleep-promoting neurons should be involved in the drowsiness that one feels after a sweet meal.