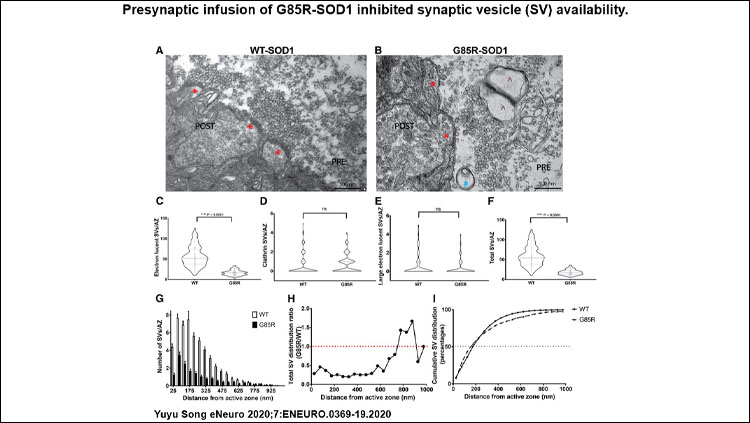 Material below summarizes the article Synaptic Actions of Amyotrophic Lateral Sclerosis-Associated G85R-SOD1 in the Squid Giant Synapse. published on March 18, 2020, in eNeuro and authored by Yuyu Song.

As in many other neurodegenerative diseases, synaptic dysfunction occurs early in ALS. Previously we showed that ALS-associated mutant SOD1 inhibited axonal trafficking of vesicles leading to synaptic inhibition.

Does mutant SOD1 also directly affect synaptic transmission? If so, how? Can we restore synaptic function and identify novel therapeutic targets?

Altered synaptic function is thought to play a role in many neurodegenerative diseases, but little is known about the underlying mechanisms for synaptic dysfunction. The squid giant synapse is a classical model for studying synaptic electrophysiology and ultrastructure, as well as molecular mechanisms of neurotransmission.

We conducted a multidisciplinary study of the synaptic effects of the ALS-causing misfolded human G85R-SOD1 in SGS. This unique model system is one of the few mature nervous systems in situ that mimics mammalian neuromuscular junctions while allowing precise experimental manipulations and live measurement with superior spatial and temporal resolution.

Our results demonstrated synaptic dysfunction caused by ALS-associated mutant SOD1 protein and its underlying molecular pathways, which may suggest a novel approach to an effective therapeutic intervention, and identify biomarkers for early diagnosis of this incurable, devastating disease.

To demonstrate the effects of G85R-SOD1 on synaptic transmission, we performed simultaneous sharp microelectrode recordings of both pre- and post-synaptic membrane potentials before and during infusion of either WT or G85R-SOD1 into the SGS. Two stimulation protocols were applied by injecting current at 0.033 Hz for basal stimulation and at 50 Hz for High Frequency Stimulation (HFS).

To capture synaptic vesicle dynamics, we quantified the size of the readily releasable pool (RRP) and the vesicle mobilization rate from RP to RRP by calculating and integrating PSP slopes recorded during HFS. To further characterize the synaptic morphology, electron microscopy was executed on the same synapses where electrophysiological recordings were previously performed.

To examine the underlying molecular mechanisms of synaptic inhibition, we used Ratiometric live Ca2+ imaging by Fura-2. Images were taken every 30 seconds and ratios at various locations were calculated as (fluorescence intensity360nm)/(fluorescence intensity390nm) as a measure of intracellular Ca2+ concentration.

G85R-SOD1 but not WT-SOD1 inhibits synaptic transmission. G85R-SOD1 induced a substantial time-dependent decrease in the EPSP slope, which was not due to physical damage of the synapse as the EPSPs were fully restored after G85R-SOD1 diffused away from the synaptic terminal through the presynaptic axon.

G85R-SOD1 impairs synaptic vesicle availability at the active zone. G85R-SOD1 drastically reduced both the RRP size and the vesicle mobilization rate from RP to RRP. EM also showed significant decrease in synaptic vesicles abutting the membrane at active zones and abnormal appearance of some vesicles resembling pre-autophagosomes and pre-lysosomes.

G85R-SOD1 induces Ca2+ increase in the presynaptic terminal. The rescuing effect of iHFS in G85R-SOD1-infused synapses suggested Ca2+ homeostasis may be part of the mechanism. Ratiometric Ca2+ imaging showed that G85R-SOD1 significantly increased Ca2+ throughout the presynaptic axons including regions without Ca2+ channels. Consistent with iHFS-rescue in synaptic physiology, aberrant Ca2+ activation was not observed after iHFS.

Synaptic loss at affected neuromuscular junctions is a primary cause of ALS. Consistent with this notion, we demonstrated in a unique squid-giant-synapse model that presynaptic ALS-G85R-SOD1 significantly inhibited EPSPs, altered synaptic vesicle dynamics and morphology, and increased presynaptic Ca2+ concentrations by potentially causing Ca2+ release from intracellular Ca2+ stores such as ER and mitochondria. These defects were prevented and corrected by iHFS and EGTA, which may redistribute and chelate Ca2+ respectively.

Correlating Ca2+ dynamics and HFS effects with synaptic health in real time illuminates the kinetic changes with high temporal and spatial resolution and suggests the importance of identifying potential therapeutic time windows. These acute effects may also indicate that the molecular mechanisms underlying the disease pathology manifest over time in patients. While the rescuing effects of iHFS are intriguing, further study is needed to address how patterns of activity can preserve synaptic function as a basis for novel therapeutic interventions in ALS.