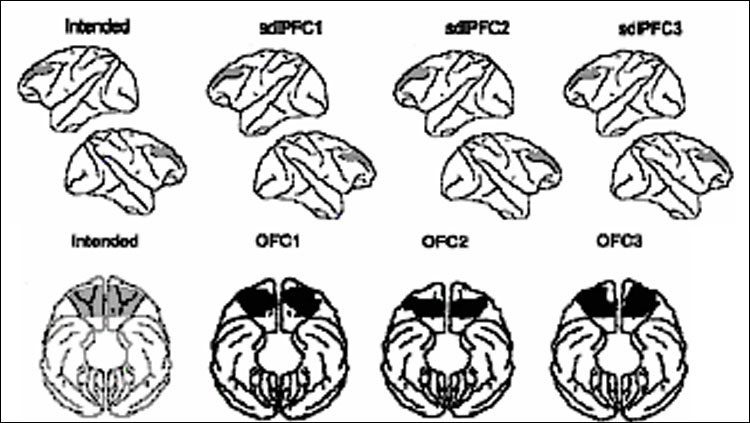 Material below summarizes the article Mnemonic Introspection in Macaques Is Dependent on Superior Dorsolateral Prefrontal Cortex But Not Orbitofrontal Cortex, published on July 24, 2019, in JNeurosci and authored by Sze Chai Kwok (郭思齊), Yudian Cai (蔡禹甸), and Mark J. Buckley.

A team of researchers has recently elucidated how the prefrontal cortex (PFC) supports a specific aspect of metacognition — introspection of success in recognition memory — in nonhuman primates.

In order to verify the importance of PFC in reflection on one’s own cognition, the team compared the performance of three monkeys with superior dorsolateral PFC damage to three monkeys with damage to orbitofrontal cortex (a brain region that contributes to confidence), and to a third group of normal monkeys in two variants of a delayed matching to position task. Making use of reaction times as a proxy for confidence and task performance data, the researchers quantified individual animals’ metacognitive ability and compared them across the lesion groups.

The results were consistent across indices that macaque monkeys' capability of introspection of their own memory success depends on intact superior dorsolateral prefrontal cortices but not the confidence-coding orbitofrontal cortices, confirming regional specificity within the prefrontal cortex for distinct elements of metacognition. These lesion effects are independent of spatial recognition performance, and the deficits could not be explained away by speed-and-accuracy trade-off.

Together with the observation that the same superior dorsolateral PFC-lesioned monkeys were not impaired in a Wisconsin Card Sorting Test analog, it was clear that these putative metacognitive deficits were specific to spatial recognition memory rather than to other confounds, such as rule learning, reward evaluation, or general representation of task information.

These findings provide causal evidence, of which there is currently very little, toward functional specialization within primate PFC underpinning introspection during memory recognition.

Historically, without explicit confidence ratings, mapping animals’ task performance to their internal state of mind has been regarded as impossible. To circumvent these limitations, the team has used a method to extract information out of response times to classify confidence levels. This approach complements the concept of meta-d’ measure, which is extracted from distributions of confidence ratings given specific stimuli and responses, and thereby setting a working example for other researchers in the pursuit of metacognition in nonhuman animals.

Visit JNeurosci to read the original article and explore other content. Read other summaries of eNeuro and JNeurosci papers in the Neuronline collection SfN Journals: Research Article Summaries.