Phosphatidylinositol-4,5-bisphosphate Is Important for Hearing 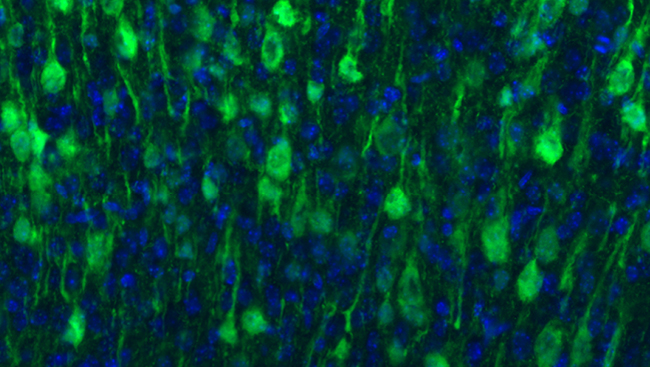 Both IHCs and OHCs possess a sensory organelle, termed hair bundle, on their apical surface that consists of multiple rows of actin-filled stereocilia. The stereocilia are arranged in a staircase pattern, with each shorter stereocilium connected to its taller neighbor at the tips through filaments, termed tip links.

Sound stimulation ultimately leads to fluid motions inside of the cochlea that result in hair bundle deflection. Deflections towards the tallest stereocilia row cause tip links to pull at the tips of each shorter stereocilium. Those pulls directly open mechano-electrical transduction (MET) channels, which allow inflow of cations and thus the translation of mechanical stimuli into electro-/chemical cell signals.

While the molecular identity of the mammalian auditory MET channel remains unknown, we found it relies on phosphatidylinositol-4,5-bisphosphate (PIP2) to function normally, affecting MET channel properties such as single-channel conductance, ion selectivity, or current adaptation.

PIP2 is an important component of the cell membrane, probably best known for its involvement in second messenger cascades that amplify small stimuli through enzymatic activity into larger signals. More recently, PIP2 became implicated as a direct modulator and/or activator of transmembrane channel proteins, including non-auditory MET channels like TREK-1 or TRAAK.

PIP2 has also been implicated in vestibular hair cell function of bullfrogs. Findings in the bullfrog prompted researchers to propose a modulation effect of PIP2 on myosin motors, a theory likely not feasible in higher vertebrates’ auditory hair cells.

Notably, we showed PIP2 directly affects core properties of the MET channel, which had previously been ascribed to protein components of the MET channel complex. This raises questions regarding our understanding of how the MET machinery operates.

The effects of PIP2 depletion on the MET machinery included:

The effect on adaptation also showed a very fast component of adaptation is biologically relevant and not an artifact of our stimulation methods, which had been discussed controversially before.

So, why is any of this important or interesting?

We show here an effect of lipid manipulation on auditory hair cells and not just a shift in MET channel sensitivity possibly resulting in a disrupted force relay. We found PIP2 is crucially important for the correct workings of the mammalian auditory MET channel and likely closely interacts with the channel proper.

Most of the effects we found were typically attributed to proteins in the past. Finding that only altering the membrane content of a single lipid species can result in all of the above effects was surprising but also exciting.

Hopefully, this will change how we see the role of the cell membrane and its composition from a mere supportive scaffold to an active and important component of protein function that may have generalizable applications to membrane proteins of multiple varieties.

With our current study, we have thus shown a closer look at the cell membrane could be essential to understand how auditory MET works. Further investigations have the potential to significantly alter our understanding of protein-lipid interactions.