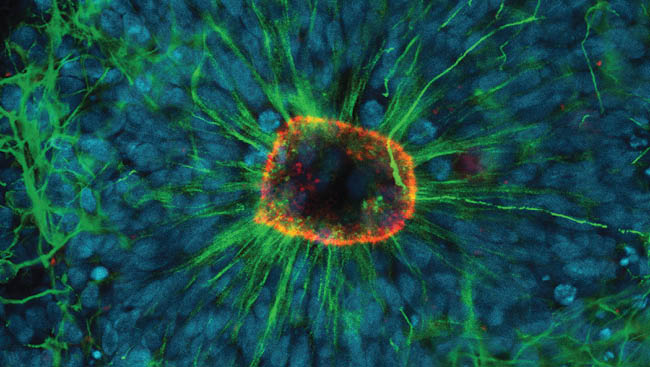 Hair cells of the inner ear play a critical role in the process of hearing. These specialized sensory cells convert mechanical sound waves into an electrical nerve signal that gets sent to the auditory cortex. Many genes contribute to the highly regulated development of these hair cells.

In this study, we discovered that partial loss of one of these genes, Atoh1, causes degeneration of mature inner ear hairs cells and adult hearing loss.

Atoh1 is a transcription factor that is essential for the birth and proliferation of all hair cells in the inner ear. Previous studies showed that all the hair cells are missing in mice lacking the Atoh1 gene. Additional studies have shown that Atoh1 acts as a master regulator, turning on expression of hundreds of genes that contribute to proper inner ear hair cell development.

Beyond inner ear hair cells, Atoh1 is critical for the development of cerebellar granule neurons and many other neurons important for hearing, balance, arousal, and breathing, as well as the mechanosensory Merkel cells of the skin and intestinal secretory cells.

Like other proneural genes that govern development of specific cell populations, Atoh1 is highly regulated. Its expression is turned off shortly after birth in mice and in humans as well.

Besides turning genes on and off, protein functions can be regulated by modifications such as phosphorylation, methylation, or ubiquitination. Such modifications might affect protein stability, interactions with other proteins, and in the case of transcription factors, the ability to bind DNA.

We therefore set out to understand how phosphorylation affects Atoh1 function.

To study the function of serine 193 (S193) in vivo, we generated mice in which the serine was changed to an alanine (S193A), a type of mutation that prevents phosphorylation of this site. We used two lines of mice for our studies. The first had two copies of the phosphomutant allele (Atoh1193A/193A), and the second had one copy of the phosphomutant allele and one copy of a null allele in which the Atoh1 gene was replaced by a LacZ reporter gene (Atoh1193A/LacZ).

We also found that expression of several target genes of Atoh1 was reduced in the hair cells, indicating that Atoh1-S193A was a hypomorph, an allele that functions at lower levels.

To explain these observations, we investigated how Atoh1 protein function could have been altered by testing three known properties of Atoh1: its protein half-life; obligate dimerization with its helix-loop-helix partners, the E proteins; and binding to DNA.

We found that the Atoh1-S193A mutant protein was normal in all three of these properties. Based on these results, it is likely that the hypomorphic function of Atoh1-S193A is due to changes in protein interactions other than with E proteins that lead to insufficient activation of its target genes. However, more work remains to prove this hypothesis.

Through our studies on Atoh1-S193A, we came across an unexpected result. We found that mice with only one copy of Atoh1 also had mild hearing loss as adults, as well as mild loss of inner ear hair cells.

This finding was quite surprising because it had always been thought that Atoh1 did not exhibit any haploinsufficiency — 50 percent of Atoh1 is enough for all functions — but now we know that cochlear hair cells are the most vulnerable cell population to changes in Atoh1 function or levels.

Because Atoh1 is critical for the proper development of additional cell populations such as the cerebellar granule neurons and many hindbrain neurons critical for balance and breathing, we also tested both lines of Atoh1-S193A mice on the rotarod assay, which assesses motor coordination. We found that Atoh1193A/lacZ mice performed significantly worse than the control mice.

We investigated morphology of the cerebellum and the hindbrain in these mice and found two abnormalities: a missing foliation between lobules VI and VII in the cerebellum and a migration defect involving precursors of the pontine nuclei neurons.

These two phenotypes are potentially connected given that pontine nuclei neurons project heavily to lobules VI and VII in the cerebellum, and both of these morphological abnormalities could contribute to the poor performance of the Atoh1193A/lacZ mice on the rotarod assay. In contrast, breathing in the Atoh1193A/lacZ mice was normal.

In summary, we discovered a key phosphorylation site that affects the function of the developmental protein, Atoh1.

We also discovered that different cells have differential vulnerability to the partial loss of Atoh1 function, with cochlear hair cells being the most vulnerable and learned having only one copy of Atoh1 results in adult hearing loss in mice.

There are hundreds of genes that are being screened in patients with hearing loss, but Atoh1 is currently not one of them. Our results point to the importance of screening for Atoh1 mutations in people with hearing loss. It would be interesting to know if subtle loss of function of Atoh1 contributes to the age-related hearing loss that occurs in some people.