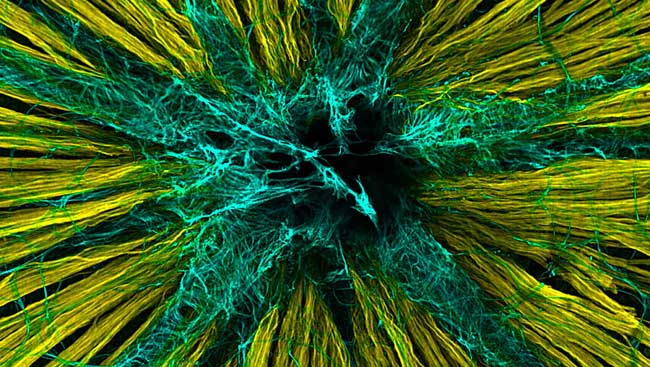 Material below summarizes the article Robust and Rapid Air-Borne Odor Tracking Without Casting, published on November 5, 2015, in eNeuro and authored by Urvashi Bhattacharyya, and Upinder Singh Bhalla.

Animals are sensitive to the range and intensity of chemical cues that determine their social behavior and survival in the wild. The sense of smell is extraordinary in its ability to detect and guide animals across this range and inform them of cues such as food, predator, or mate. In a complex environment, stimuli could also comprise visual, auditory, or tactile inputs. Thus, it is important to study how animals change their strategy of odor localization based on the environment they interact with.

Odor on surface trails and in waterborne plumes are easy to visualize. Studying airborne odor-guided navigation in-field is difficult due to the lack of visualization or measurement of odor landscape. We circumvented this problem by building a novel task in a funnel-shaped, multi-choice arena (five odor compartments), with a near laminar odor flow. Due to the shape and air flow properties in this arena, plumes originating from all odor ports were spatially distinct and streamlined. The position of any object with respect to the odor plume thus became a measurable parameter. In this arena, we trained thermocouple-implanted rats to locate odors originating from different sources. In addition to the baseline laminar flow, we introduced varying conditions found in nature, such as novel odors, background odor presence, and increased turbulence. We also tested if blocking one nostril affects odor guided navigation. Overall, we examined how animals use odor cues to navigate, strategize, and select targets in contexts with similar challenges to ethologically relevant situations.

We identified a novel strategy that rats use to locate possible sources using initial odor cues. We termed this behavior as “run and scan,” as the rats were observed to approach targets directly in an odor-guided but error-prone manner. The rats scanned other possible odor sources if the initial choice was wrong. This resulted in two tracks, direct and serial, distinguishable by measureable parameters, such as instantaneous speed, deviation from plume, and time taken to finish trial. In direct trials, rats entered the correct odor port on the first choice with a nearly straight trajectory. In serial trials, the erroneous first entry was followed by lateral scans with two or more compartment entries before the final correct target was selected. Throughout tracking runs, rats sampled the arena at speeds 20-30 percent lower than non-tracking runs and with sniffing rates at approximately 8-10 hertz, comparable to those found in other odor guided tasks.

For the baseline task of tracking an odor from five possible odor ports, rats showed a selection bias of 3-4 compartments where the first entry was in the correct port. The frequency of direct target selection was on an average 50 percent. Additionally, errors in 25 percent of the remaining trials were adjacent to the correct odor port. We also observed trajectories where course corrections were made by rats during tracking. It was thus likely that rats selected targets early in their runs, at a position in the arena where odor plumes from adjacent compartments overlapped. This was supported by a comparison of instantaneous speeds and deviation from odor plume in direct and serial trajectories until the first port entry.

To understand the effect of different perturbations in the system, we compared accuracy of target selection, average speed, and root mean square deviation of rat trajectories until first entry, total trial time, and fraction of correct direct trials. The behavior of run and scan was robust to different perturbations introduced in the odor landscape, albeit involving a speed-accuracy trade-off. For example, unilateral nostril blockage resulted in rats taking longer to select targets accurately. Rats needed a learning period when given difficult tasks, such as tracking a novel odor or presence of background. Following a change in task, the performance accuracy was initially affected, but the animals typically returned to high performance within 2-3 days. Remarkably, increasing turbulence in air flow did not strongly affect accuracy, but did result in increased deviation of animal tracks from the odor plume.

The run and scan behavior observed in this study is different from casting behavior in insects and surface odor tracking in rats and humans. We modeled the efficiency of both behaviors across a range of distances and number of choices. Interestingly, the run and scan strategy turns out to be preferable over casting provided the number of targets is small (under 10) and the distances are greater than a meter.

Run and scan is not a pure chemotactic behavior. Familiarity of environment, associative learning, task difficulty, and context along with plume characteristics effects decision-making and use of strategies in rats. Rats are not alone in displaying different tracking behavior. Multiple strategies are also observed in dogs, when they follow an odor trail by air scenting with their head up in the air, trailing with their head up or down depending upon wind movement, or tracking with their nose down on the ground.

Our novel task shows how animals can use airborne odor cues to make these decisions. Further work with neuronal recordings from olfactory centers can help us probe goal directed navigation in related ethological contexts.

Upinder Bhalla, PhD
Upinder Bhalla is a professor at the National Centre for Biological Sciences, TIFR Bangalore, where he uses experimental and computational approaches to study learning and behavior. He has combined experimental and computer modeling to study brain function throughout his research career and is currently looking at the interplay between chemical and electrical signaling in hippocampal plasticity and learning of sequences.
﻿