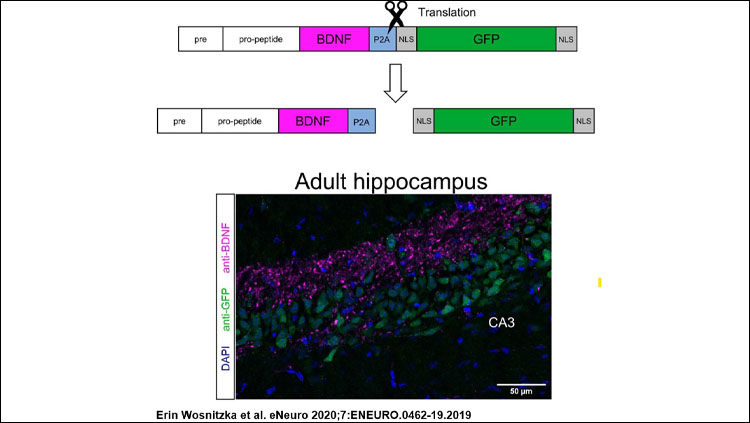 Can GFP fusion constructs be used to explore the physiology and cell biology of BDNF, as much of the current literature suggests? If not, is there an alternative that would also make drug screening possible in a brain-region-specific manner?

Like many growth factors, BDNF acts at very low concentrations through the activation of high affinity receptors. While the restricted availability and low abundance of growth factors is a key aspect of their specificity, these attributes also make the detection of growth factors in cells and tissues exceedingly difficult.

Furthermore, the lack of thoroughly validated antibodies specifically recognizing their targets continues to be a major problem. The first BDNF monoclonal antibody suitable for Western blotting only became available recently, and there is just one fully validated monoclonal antibody allowing the detection of BDNF by immunohistochemistry. These difficulties explain why over a long period of time, scientists resorted to overexpression paradigms under the assumption that the distribution of overexpressed BDNF may reflect the distribution of endogenous BDNF.

The study had three main components:

The direct coupling of BDNF to GFP turns out to impair the processing of the BDNF precursor as well as the secretion of BDNF. The study also illustrates the observation that tags of increasing length proportionally compromise the ability of BDNF to fully activate TrkB.

This is proposed to be the explanation for the mild obesity phenotype observed in ageing animals carrying the Bdnf-P2a-Gfp gene substitution: The 22-amino acid P2A sequence remaining attached to BDNF is likely to chronically decrease the activation of TrkB. This suggestion is based on abundant literature, including human genetics, indicating that a fully functional BDNF/TrkB pathway decreases food intake.

Most importantly, BDNF translation can be assessed in brain sections by monitoring the intensity of the GFP signal. The quantitative data indicate a near-perfect match with previous in situ hybridization studies suggesting that under physiological conditions, BDNF protein levels are primarily regulated by transcriptional activity. Curiously, these results do not quite match published data obtained by single cell RNAseq for reasons that remain unclear.

Long tags such as GFP would seem a priori problematic when fused with proteins undergoing extensive co- and posttranslational processing including glycosylation, homodimerization, proteolytic cleavage, and vesicular packaging and trafficking.

Reliable visualization of the trafficking of endogenous proteins will require new developments including much smaller genetically encoded probes.

With the approach described in our contribution, single cells can now be isolated from mouse tissues and their molecular make-up correlated with the degree of BDNF translation.

The project was the result of a close collaboration between groups in Cardiff and Biberach: Erin Wosnitzka, Xinsheng Nan, and Yves Barde, at Cardiff University, Jeff Nan and Pedro Chacon-Fernandez, who used to work at Cardiff University, and Lothar Kussmaul, Michael Schuler, and Bastian Hengerer, at Boehringer Ingelheim, a pharmaceutical company in Germany.