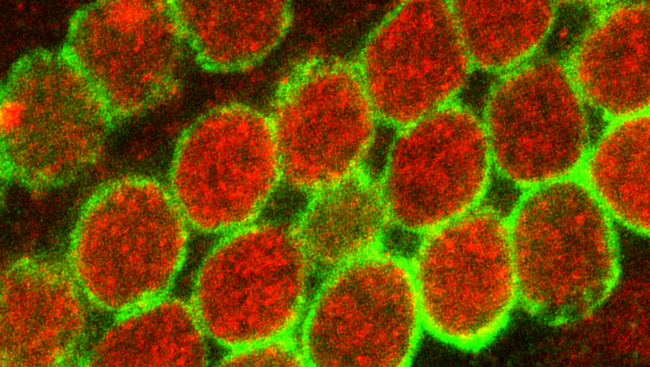 A major hurdle in understanding disorders like autism and schizophrenia is our inability to directly access the human brain. Functional magnetic resonance imaging techniques allow scientists to broadly visualize brain activity, but cannot show the complexities of networks between cells. Scientists can study brain structure with post-mortem tissue, but not their function.

While scientists can grow neurons from induced pluripotent stem cells (iPSCs) derived from patients’ skin or blood cells, these attempts required an external matrix on which to grow cells in a series of technically challenging steps resulting in neurons that lack the complex circuitry of the human brain.

Now, however, researchers have found a way to create spheres of neuronal cells that grow and function like the outer layer, or cerebral cortex, of the human brain. Simpler and more reproducible, the technique results in human cortical spheroids (HCSs) that are a functional, naturalistic simulation of the human cortex.

Using an improved, streamlined method for producing iPSCs, researchers create HCSs with healthier, more mature neurons. Like the developing brain, the neurons form layers and talk with each other through neural networking. The spheroids grow up to five millimeters in diameter and can be maintained in the laboratory for more than nine months. They express genes in patterns similar to a human fetal brain midway through pregnancy and mimic the orderly, three-dimensional architecture of the human cortex.

Critically, HCSs also contain support cells called astrocytes. These star-shaped cells are essential for the formation of synapses, which allow neurons to signal each other. Since the HCSs consist of both neurons and astrocytes, most of the neurons inside the spheroids have active synapses, spontaneously sending messages to the surrounding neural network.

HCSs can be studied with techniques developed in animal models such as brain slice physiology. Researchers can slice the spheroids and either record electrical activity or electrically stimulate the neurons while keeping the network intact.

These spheroids do not approach the complexity of a whole human brain. For instance, the method currently only produces one type of neuron, excitatory neurons. But the power of the new technique is encouraging. Researchers hope HCSs will provide a tool to study human brain development and function in a dish. There is great potential for helping patients with a wide variety of brain disorders.

Tracking the development of HCSs as they grow and observing the interactions of their cells may shed light on normal brain development, as well as the causes of brain disorders. Since the spheroids are derived from a patient’s own cells, this technique offers the possibility for personalized models of the human brain. A spheroid created from a patient with a particular neuropsychiatric disorder could potentially reveal what circuits went awry in the developing cortex leading to better treatments. For instance, one could take skin cells from a patient with schizophrenia or Alzheimer’s disease and recapitulate the development of their brain in a culture dish to figure out where things went wrong – and how it might be corrected.

While this technology is still young, there is great potential for using HCSs to study brain diseases, develop novel therapeutics, and test the safety and efficacy of treatments before they are used in patients. These little balls of brain cells are bringing us closer to the days of personalized medicine for brain disorders.

Hiroko Nobuta, PhD
Hiroko Nobuta is a postdoctoral fellow in the neuroscience department at the Albert Einstein College of Medicine. She completed training in oligodendrocyte biology with her PhD mentor James Waschek, at the University of California, Los Angeles, as well as her postdoctoral mentors David Rowitch, at the University of California, San Francisco, and Marius Wernig, at Stanford University. She is now exploring gene engineering methods to manipulate glia cells to treat neurodegenerative disorders.
﻿
MORE
4 of 5 articles left
Login or Become a Member to unlock content