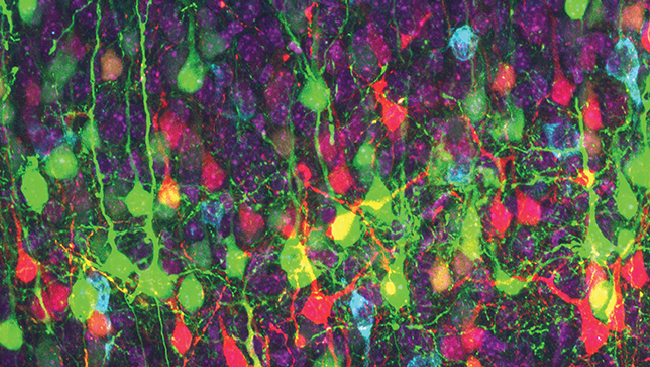 Microglia — the macrophages of the central nervous system (CNS) — not only perform immune functions, but also sculpt the brain. They regulate neuronal development, play roles in plasticity and neurodegeneration, and prune synapses. Understanding how these cells function has helped researchers better understand how synapses can change during disease and may even lead to new therapies.

Researchers now know microglia differ from macrophages in other tissues, in that they perform specialized CNS-related functions. But within microglia, many different transcriptional profiles exist that depend upon sex, cellular age, development, brain location, and the resident bacteria of the gut and likely reflect each cell’s specialized function. Studies that provide a more in depth look at microglia profiles will help illuminate their plasticity and many functions.

One of the primary roles of microglia is to react to signals from damaged or dying cells, then migrate toward and clear resulting cellular debris. They also use phagocytosis early to influence embryonic brain development. Previous research has shown loss of genes associated with microglia can increase the incidence of neurodevelopmental and neuropsychiatric disorders. In addition, microglia regulate spatial patterning by removing cells that have undergone apoptosis during both embryonic and adult neurogenesis. Future research will likely focus on how microglia interact with neurons and astrocytes during brain development.

Microglia also use processes to form connections with synapses and prune them, which primarily takes place during neuronal development. The microglia express a receptor for a classic immune-activation signal called complement, which is expressed at redundant or weak synapses. Microglia use this receptor to target these synapses for phagocytosis and removal. Studies have shown mice that lack parts of this activation pathway have synaptic connectivity defects.

In addition to their normal functions during development and neurogenesis, studies have also linked microglia function with neurodegenerative diseases such as Alzheimer’s disease and Parkinson’s disease. In Alzheimer’s disease, both complement and microglia appear at synapses, which may target those synapses for inappropriate pruning. Other pathways that rely on neuron activity and the adaptive immune system may also be involved in synapse removal during neurodegenerative disease. Researchers are currently investigating the role of complement, microglia, and other pathways in synapse removal during disease in order to identify new candidate therapies. In addition to understanding synapse phagocytosis, work also focuses on the signals that facilitate the movement of microglia to synapses.

Evidence implicates microglia in a variety of neuropsychiatric, neurodevelopmental, and neurodegenerative diseases, yet the time, location, and degree of microglial synapse pruning differs across these pathologies. Work to understand these diverse disease states, alongside an exploration of how microglia function in healthy brain tissue, could lead to the identification and development of new pharmaceutical treatments, biological markers, and the development of better strategies to treat many diseases.