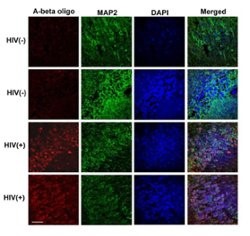 A protein involved in Alzheimer’s disease (AD) may be a promising target for treating neurological disorders in human immunodeficiency virus (HIV) patients, suggests a study published in JNeurosci of rat neurons and brain tissue from deceased humans. The research shows the two conditions may damage neurons in similar ways.

Although HIV-associated neurological disorders (HAND) and AD have symptoms in common, whether they also share underlying mechanisms of disease progression is controversial because HAND patients do not exhibit the amyloid plaques that are characteristic of AD.

Blocking the activity of an enzyme that has a key role in the generation of recurring seizures may provide a new way to treat epilepsy that is resistant to anti-seizure drugs, according to a study of rats and mice published in JNeurosci.

One-third of people with epilepsy, one of the most common neurological disorders, do not respond well to current treatments for managing seizures. Part of this challenge is seizures erode the lining of capillaries in the brain that let nutrients in and keeps toxins out. A “leaky” blood-brain barrier, in turn, leads to more seizures. Understanding how this cycle occurs is necessary in order to develop strategies to plug the leak.

In their study of rodent brain capillaries, Björn Bauer and colleagues identified a seizure-triggered pathway that contributes to blood-brain barrier dysfunction in epilepsy. The neurotransmitter glutamate, released during seizures, increased the activity of two types of enzymes belonging to a group called matrix-metalloproteinase (MMP-2, MMP-9) and degraded the tightly-packed proteins that form a critical component of the blood-brain barrier. Blocking another enzyme called cytosolic phospholipase A2 (cPLA2) in rats with induced seizures and genetically deleting CPLA2 in mice prevented these changes and the associated capillary leakage.

Where the Brain Detects Changes in Natural Sounds

Electrical activity in a region of the parietal cortex underlies the detection of a transition between two complex sounds, finds a study of human participants published in eNeuro. The research provides insight into how the brain tunes into relevant changes in the environment to optimize behavior.

The world is filled with a multitude of ever-changing sound. While some of these sounds signal important information about the environment, such as the presence of danger, many others are not so useful. Detecting changes in a natural soundscape is essential for identifying which sounds should be attended to.

Bernhard Englitz and colleagues presented participants with random changes (or no change) between two acoustic textures resembling rain, applause or bubbling water through headphones while their brain activity was recorded using electroencephalography. They found the longer participants were exposed to the first texture, the faster their reaction time and ability to identify the changes.

Activity in the precuneus, a part of the parietal cortex near the occipital lobe, appears to be the source of these effects, which were stronger when participants were prompted to indicate whether or not they noticed a change, but also present in passive listening conditions.

A Neurobiological Link Between PTSD and Addiction

Recalling traumatic memories enhances the rewarding effects of morphine in male rats, finds new research published in JNeurosci. These findings may help to explain the co-occurrence of post-traumatic stress disorder (PTSD) and addiction.

More than half of PTSD patients also struggle with substance abuse, yet the underlying neural mechanisms of their addiction are not clear. Dopamine receptors in the prefrontal cortex may play a role, as they are involved in the processing of both fear- and reward-related memories.

Steven Laviolette and colleagues examined the involvement of two dopamine receptors in the recall of a traumatic experience — a footshock — and subsequent preference for morphine. Rats that were reminded of the troubling experience by an associated scent showed a greater freezing fear response and spent more time in an environment where they previously received a dose of morphine that ordinarily does not produce a preference for a morphine-paired environment.

This effect was blocked by activation of the dopamine receptor D1R. A different dopamine receptor, D4R, increased freezing behavior and reward sensitivity after the recall of a minor footshock that does not produce a traumatic memory under normal conditions.

The results suggest that abnormal dopamine signals in the prefrontal cortex may underlie the ability of traumatic memories to predispose individuals to addiction by increasing their sensitivity to the rewarding effects of drugs such as opioids.