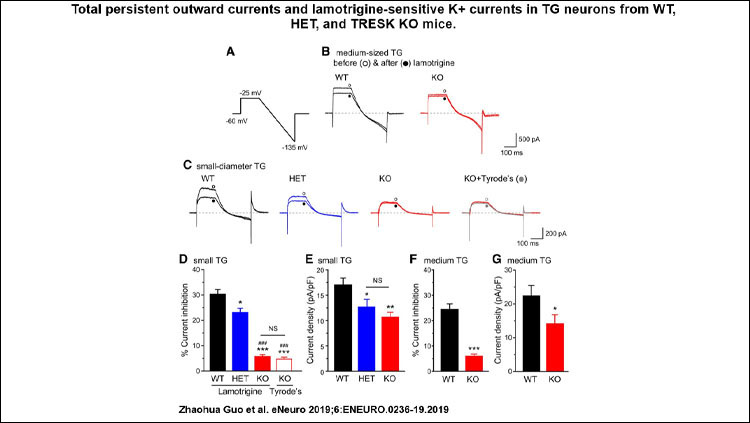 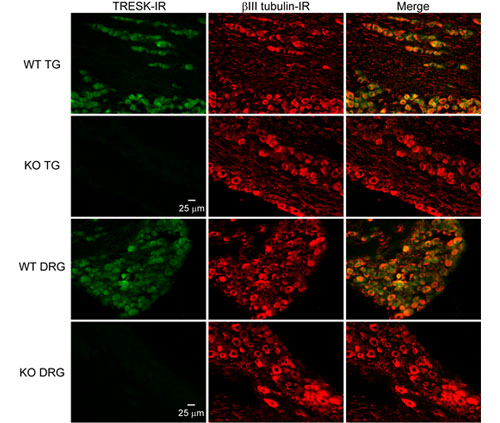 Migraine headache is one of the most common neurovascular disorders and the second leading cause for disability worldwide, affecting 12% of the general population. Recurring headache, which lasts between 4 and 72 hours, is highly debilitating, poorly understood, and difficult to treat. Elucidating the mechanisms underlying migraine headache is important for the development of better and safer treatments.

We analyzed the TRESK KO mice, which do not express TRESK channel in any cells from neonatal to adult, by immunostaining TG and DRG sections from WT and KO mice with an antibody that recognizes mouse TRESK protein.

Using patch-clamp recording, we compared TRESK-like current in TG and DRG neurons from WT and KO mice, as well as intrinsic excitability.

In addition, headache-related behaviors were observed in both WT and KO mice that recovered from craniectomy by dural application of either saline or IScap (a mixture of inflammatory mediators).

In TG neurons, absence of TRESK channel made one-third hyper-excitable, i.e. they could be activated by a smaller depolarizing current, and when activated, they generated more action potential. Some TG neurons from KO mice even spontaneously generated action potentials. Notably, many of these neurons expressed neuropeptide CGRP. Because CGRP is released during migraine headache, and blocking CGRP can present migraine in many patients, we hypothesized that KO mice may be more likely to develop headache-like behaviors due to the hyper-excitation of CGRP-expressing TG neurons.

The generation of headache usually starts with the activation of TG neurons that project their axons to meninges. To mimic this process, we applied IScap on mouse meninges to activate the TG neuron axons. Less than 40% of WT mice show headache-like behaviors (using paws to wipe the top of head) in this headache model. Remarkably, more than 80% of KO mice display headache-like behaviors, indicating that loss of TRESK indeed increases the likelihood of getting headache. Furthermore, we used FG labeled TG neurons to specifically record the “headache-generating” neurons. Indeed, the “headache-generating” neurons from KO mice are more excitable than those from WT mice.

Having established that TRESK channels regulate headache and other facial pain, we then asked whether loss of TRESK affects DRG neurons and body pain behaviors in KO mice.

A previous study demonstrated increased DRG neuronal excitability and body pain behaviors in KO mice. Surprisingly, we found that none of the DRG neurons from our KO mice were hyper-excitable. We believe that unlike TG neurons, DRG neurons can upregulate other currents to fully compensate for the loss of TRESK-like current. This ensures that DRG neurons generate normal responses to painful stimuli without TRESK. Consequently, KO mice have normal behaviors to nociceptive heat, cold, touch, and chemical stimuli on hindpaws.

The discrepancy between our results and the previous work may arise from differences between genetic background and/or the housing conditions of the two strains of KO mice. If so, it suggests that nature and/or nurture influence whether defective TRESK channels affect body pain.