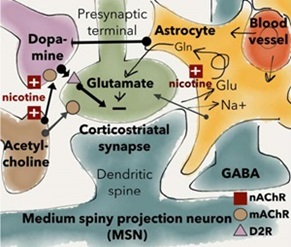 A study of rat brain slices published in JNeurosci demonstrates how nicotine interacts with cells that regulate the output of a brain region involved in habit formation. The research could inform efforts to help people quit smoking and avoid relapse.

The addictive qualities of nicotine have been attributed to the brain's reward system. However, recent research suggests that a shift of activity from the ventral to the dorsal striatum, which parallels the transition of an intentional behavior into a more automatic habit, may have an important role in the development of nicotine addiction.

Louise Adermark and colleagues found nicotine reduces dorsal striatal output, an effect that persists even after the drug has been cleared from the brain. These changes in neuronal activity may underlie the urge to smoke as well as make it difficult to break the habit. This advance in our understanding of nicotine addiction may help to decrease smoking prevalence.

Repeated exposure to large quantities of alcohol may lead to tolerance by reducing the activity of a protein that regulates communication between neurons, according to a study of fruit flies published in eNeuro. 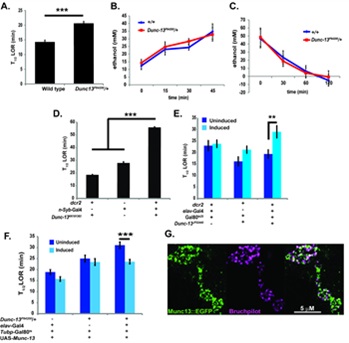 Binge drinking has lasting effects on brain activity, but it is not clear how ethanol — the intoxicating component of alcoholic beverages — creates these changes.

One possibility is that ethanol interacts with a family of proteins (Unc13) that help control the release of neurotransmitters across the synaptic gap between neurons. In mice, worms and flies, mutations affecting Unc13 reduce activity of the cell on the transmitting side of the synapse.

Gregg Roman and colleagues previously found that fruit flies with reduced activity of the gene Dunc13 consumed significantly more ethanol than flies without the mutation.

Building on these findings, the researchers now demonstrate that ethanol interferes with the binding of diacylglycerol — a chemical compound that facilitates neurotransmitter release — and reduces the activity of the Unc13 protein. Flies with reduced Dunc13 activity took longer to become sedated after being exposed to intoxicating levels of ethanol. The research provides new insight into the neurobiology of alcohol tolerance.

Two pathways in the brain converging at the amygdala regulate the anxiety and depression that often accompanies chronic pain, suggests research in male rats published in JNeurosci. One of these pathways may represent a top-down mechanism that controls negative emotion under stress. 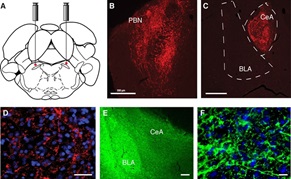 Using optogenetic stimulation, Zhizhong Pan and colleagues identify two opposing neural pathways — one that carries pain signals from the parabrachial nucleus to the central nucleus of amygdala (PBN-CeA) and another from the basolateral amygdala to CeA (BLA-CeA) — that integrate negative and positive emotion. Activating the PBN-CeA circuit generated anxiety- and depression-like behaviors in rats, even in the absence of physical pain, while activating the BLA-CeA counteracted each of these behaviors.

These new insights into the complex relationship between pain and emotion may help to improve treatment of neuropsychiatric disorders that develop in patients suffering from chronic pain.

Speed-Accuracy Tradeoff Turns Up Gain in the Brain

Widespread changes in neural activity enable people to quickly make a decision by "turning up the gain in the brain," suggests a human study published in eNeuro. The findings help to resolve a central issue in our understanding of decision-making.

The ability to optimize the balance between careful and hasty decision-making is critical for survival. However, a compelling explanation for how the brain strikes such a balance, known as speed-accuracy tradeoff (SAT), is lacking.

Carmen Kohl and colleagues reconcile contradictory accounts of the SAT by providing evidence for a model of speeded decision-making that explains both behavioral and neural data.

For this study, human participants indicated the direction of moving dots on a screen either as fast or as accurately as possible using a "pinch" or "grasp" response while their brain and muscle activity was recorded.

The researchers found their results were best explained by a model in which the brain adjusts the signal-to-noise ratio of neural activity in order to tailor the balance between speed and accuracy to the decision-making context.