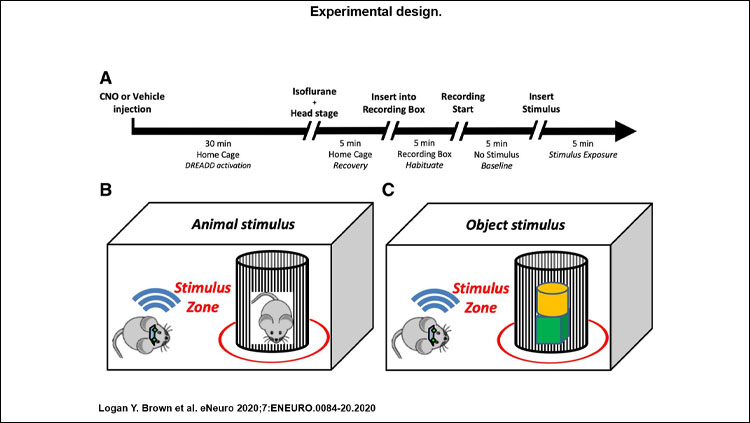 Given that CA1 gamma oscillations are regulated in a layer-specific manner reflective of its upstream inputs, we predicted that if CA2-dependent oscillations in CA1 contribute to its function in social memory, then they should occur during social exposure and, given the distribution of CA2 axons in CA1, should be organized in a layer-specific manner.

In this study, we chemogenetically inhibited CA2 pyramidal cells using inhibitory DREADDs to determine whether CA2 contributes to the organization of these oscillations in CA1 during investigation of novel stimuli. We recorded local field potentials from across CA1 layers while subjects freely explored novel juvenile conspecifics or novel inanimate objects and examined neuronal oscillations in the theta, slow gamma, and fast gamma frequency ranges.

No significant effects were detected in stratum lacunosum moleculare, a layer not targeted by CA2 pyramidal cells. Theta oscillations did not significantly differ as a result of any experimental manipulation performed. CA2 inhibition also did not affect the time subjects spent investigating stimuli, or locomotor behavior. Thus, we found that CA1 gamma oscillatory power varies by layer, frequency, and CA2 activity.

These findings reveal three novel points about CA2. First, CA2 organizes gamma oscillations in CA1 during investigation of novel stimuli, besides during running. Second, CA2 modulates gamma activity in the pyramidal cell layer and specific dendritic layers of CA1. Third, CA2 may serve to amplify both slow and fast gamma in CA1.

These findings expand CA2’s role in modulating hippocampal oscillatory networks to include neuronal activity in the fast gamma band, as well as during the repertoire of behaviors CA2 may support. The effect of slow gamma reduction in the pyramidal cell layer only during investigation of a novel social stimulus supports the idea of a role for CA2 in social cognition. The reduction of gamma power in other layers during investigation of objects, however, suggests that the role of CA2 may not be limited to social functions. Instead, CA2 appears to be signaling novelty within hippocampal circuits.

Logan Brown, PhD
Logan Brown completed his PhD at the University of North Carolina at Chapel Hill in the laboratory of Serena M. Dudek.

Georgia Alexander, PhD
Georgia Alexander completed her PhD in Neuroscience from Wake Forest, postdoctoral training in Neurobiology at Duke University, and is currently a Staff Scientist in Serena M. Dudek's laboratory at the National Institute of Environmental Health Sciences.

Jesse Cushman, PhD
Jesse Cushman completed his PhD and postdoctoral training at UCLA and is now the Director of the Neurobehavioral Core at the National Institute of Environmental Health Sciences.