Extending the Range of Cellular Imaging: Sodium and Calcium at the Same Time 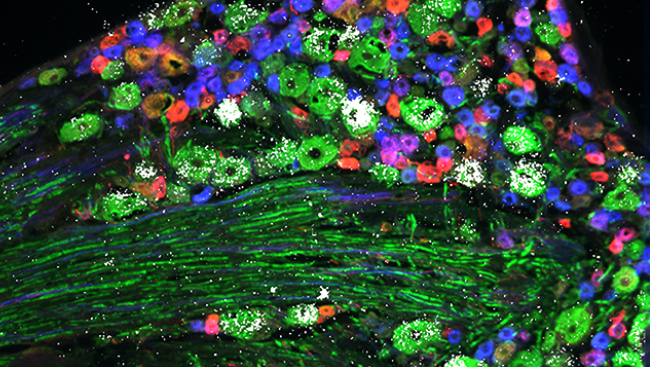 Material below summarizes the article Simultaneous Sodium and Calcium Imaging from Dendrites and Axons, published on October 14, 2015, in eNeuro and authored by Kenichi Miyazaki and William N. Ross.

Dynamic calcium imaging is an important technique. It can reveal information about the location of various calcium channels and calcium permeable receptors; the time course, magnitude, and location of intracellular calcium concentration ([Ca2+]i) changes; and indirectly, the occurrence of action potentials.

Dynamic sodium imaging, a less-used technique, can reveal analogous information related to sodium signaling. In some cases, like the imaging of AMPA and NMDA receptor responses to synaptic stimulation, detection of both [Ca2+]i and [Na+]i changes in the same preparation may provide more information than separate measurements. This is because both receptors are permeable to sodium, but only the NMDA receptor is permeable to calcium.

Previously, investigators interested in measuring both kinds of ion changes would do separate experiments with the hope that the conditions in both would be the same: one measuring [Ca2+]i changes and, in a separate preparation, an experiment measuring [Na+]i changes. Since this hope could not be guaranteed, the experiments would have to be interpreted carefully. If both measurements could be made at the same time, then more precise comparisons could be made.

We developed a technique to simultaneously measure both signals at high speed and sufficient sensitivity to detect localized physiological events. We first looked for fluorescent indicator molecules for [Ca2+]i and [Na+]i changes that have separated excitation bands. Two combinations met this requirement: SBFI, a sodium sensitive indicator excited near 365 nm and any of the Oregon Green or Fluo calcium indicators excited near 480 nanometers; or any of the fura series of indicators excited near 380 nanometers and ANG-2, a sodium indicator excited near 520 nanometers. By switching between the two excitation wavelengths, we could excite one indicator or the other if they were both loaded into the same cell.

We also designed custom dichroic and emission filters to allow the optimal separate detection of the fluorescence of sodium and calcium indicators. To excite the two indicators quasi-simultaneously, we alternated the wavelength of excitation rapidly (500 hertz). We achieved this high speed using high power light emitting diodes (LEDs). These LEDs turn on and off in microseconds, have relatively narrow emission bands, and emit intensities much higher than arc lamps at the important wavelengths. To detect the alternating flashes of fluorescence from the two indicators, we synchronized the two millisecond LED pulses with movie frames from a sensitive, low noise, high speed CCD camera (RedShirtImaging NeuroCCD-SMQ) operated at 500 hertz.

Software then separated the two data streams from alternating frames to provide independent sodium and calcium signals. Additional channels recorded the voltage and current traces from the patch electrode that was also used to inject the indicators into the cell. The analysis program then displayed all four channels (two optical and two electrical) on the same time base.

This system can be used to detect simultaneous signals from any two fluorescent indicators that have separated excitation bands. In the paper, we give examples where we measured [Ca2+]i changes with two different calcium indicators and [Na+]i with different sodium indicators. These kinds of measurements might be useful if, for example, one indicator was high affinity (a good choice for measuring small concentration changes) and the other indicator was low affinity (a good choice for non-saturating and linear measurements). In principle, this system could be extended to record three optical channels simultaneously, provided the excitation bands are sufficiently separated. A practical example would be detection of [Ca2+]i changes with high and low affinity indicators together with the detection of [Na+]i changes. Finally, it should be noted that ours is not the only system capable of simultaneously detecting signals from two sources. Other systems, using different approaches, are referenced in the paper.

Our current experiments use this system to examine dendritic properties of pyramidal neurons in rat hippocampal slices. In a typical experiment we can detect [Ca2+]i and [Na+]i changes from single action potentials in axons and synaptically evoked signals in dendrites, both with submicron resolution and a good signal to noise ratio. We often find that the two signals give complementary information about the cell response.

Visit eNeuro to read the original article and explore other content.