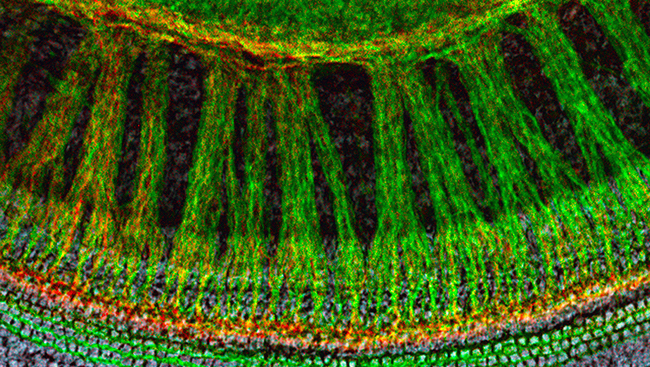 Our lab focuses on the development and function of a relatively obscure brain region called the habenula. The habenula has three principal anatomical regions: the lateral habenula, ventral medial habenula (vMHb), and dorsal medial habenula (dMHb). In early studies, these regions were treated as a unit, but in recent work, their distinct circuits and functions have begun to emerge.

In prior research, we have shown that a transcription factor, Pou4f1, is required for the developmental expression of many genes that characterize the habenula. We have generated mice in which Pou4f1 is flanked by loxP sites (“floxed”) and thus can be deleted by cre-recombinase. When we used an appropriate cre-expressing mouse strain to remove Pou4f1 developmentally in the dMHb, we found that Pou4f1 is essential for the postnatal survival of dMHb neurons. That is, that the conditional knockout (CKO) of Pou4f1 results in an ablation the dMHb. In the two papers described here, we used this Pou4f1CKO model, along with optogenetic models, to examine dMHb function.

The habenula is part of the epithalamus, which includes the pineal organ. In lower vertebrates, this region also includes the light sensitive “third eye” or “parietal eye.” In mammals, light sensitivity is lost, but melatonin, a sleep-promoting hormone, is produced by the pineal. Because of this ancient relationship between the epithalamus and daily rhythms, we collaborated with a laboratory that specializes in circadian rhythms and sleep in order to examine the rhythms of the dMHbCKO mice.

In rodents, circadian rhythms are often measured using voluntary wheel running activity (WRA), well known to every child who has ever kept a small rodent as a pet. When we compared the nightly cycles of wheel running of dMHbCKO mice with controls, the most striking observation was that dMHb ablated mice engaged in far less running activity.

We considered that these mice might have some deficit in motor function that could inhibit their running. However, the dMHbCKO mice were nearly normal in other motor tests such as open field activity, home cage activity, balance beam performance, and gait analysis. Thus our initial conclusion was that the dMHb is required for exercise reinforcement or motivation, rather than ability.

Because the dMHb appears to be required for exercise reinforcement, we asked whether direct stimulation of the dMHb is intrinsically reinforcing. One way to address this is to set up an operant device, such as a lever, nose-poke, or response wheel, in which the animal can trigger stimulation of a specific brain region. It has been known for 50 years that animals will quickly learn to perform electrical “intracranial self-stimulation” (ICSS) of brain regions that mediate reinforcement. Although several brain regions have been shown to support ICSS, over time this area of research has become focused mainly on the ascending dopamine system.

Because of its small size, it is not practical to stimulate the dMHb and spare the surrounding structures using traditional stimulating electrodes. Instead, we took an optogenetic approach, using transgenic mice developed at the Allen Institute for Brain Science that conditionally express channelrhodopsin (ChR2) in the presence of cre-recombinase.

Using the same cre-recombinase line used to make the dMHbCKO mice to drive channelrhodopsin expression, we showed that mice will work avidly to stimulate the dMHb with pulses of light. In the most recent paper, we demonstrated that this effect resides in dMHb neurons that produce tachykinin neuropeptides, and project to a specific tegmental brain center, the lateral interpeduncular nucleus (IPL).

This is remarkable because neither the dMHb nor the IPL is known to make a connection to the dopamine system. Although an indirect connection cannot be excluded, these results suggest that the dMHb interacts with alternate systems of behavioral reinforcement, perhaps involving serotonin.

Voluntary exercise is related to mood in humans and rodents. In rats, access to a running wheel can relieve the effects of stressors that induce depression-like states. For this reason, we tested dMHbCKO mice without a history of running wheel access in several behavioral tests that have been used as models of depression. These tests have some “face validity” with respect to human depression, but the common property linking these tests is mainly that behavior is “less depressed” in animals that have been treated with drugs that act as antidepressants in human studies. Rodents that have been traumatized lose their natural preference for sweetened drinking water.

In this sucrose preference test, dMHbCKO mice were “depressed.” In one test of “behavioral despair,” the forced swim test, little difference was observed between dMHbCKO mice and controls. However, in the related tail suspension test, dMHbCKO mice showed less of the passive behavior associated with depression.

Work from another laboratory has proposed that projections to the dMHb are involved in the acquisition of conditioned fear behavior, but we found no effect on fear conditioning in dMHbCKO mice.

We conclude that mice lacking the dMHb cannot be described as either more or less depressed across all of these models. Rather, as the neural circuitry underlying mood related behaviors is better understood, important differences between these behavioral tests may become apparent.

Eric Turner, MD, PhD
Eric Turner is a principal investigator at the Center for Integrative Brain Research at Seattle Children’s Research Institute and a professor of psychiatry at the University of Washington, Seattle.
﻿