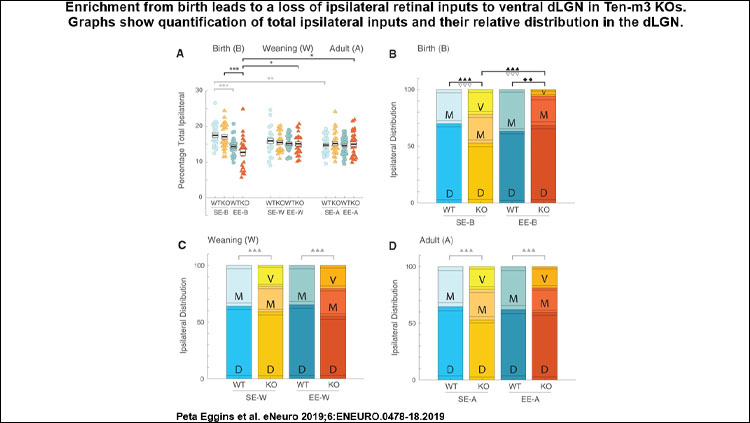 Can environmental enrichment induce correction of miswired neural circuits and if so, is there a specific time period when the circuit is sensitive to this intervention?

How This Study Advances What We Know

There is strong evidence in the literature that environmental enrichment (which describes the augmentation of the physical, cognitive, and social surroundings of laboratory animals) can promote neural function and plasticity. Since it is non-invasive, it is an extremely attractive tool to enhance neural capacity and may have benefits for a range of neurological disorders.

It was not known, however, whether environmental enrichment was able to induce the correction of profoundly miswired brain circuits arising from deficits in the guidance of growing axons during early development. The Ten-m3 knockout mouse is missing a critically important axon pathfinding protein. This leads to a dramatic and consistent error in the mapping of uncrossed projections from the output of the eye to central structures within the brain.

We have previously shown that these miswired projections are associated with a profound functional deficit — the mice behave as if they are blind when they have both eyes open.

The main study assessed the contribution of three variables to the wiring of uncrossed projections in a 2 x 2 x 3 design: housing (standard or enriched), genotype (wildtype/normal or lacking Ten-m3/knockout), and age (birth, adolescence/weaning/3 weeks of age, or adult. Between 5–8 subjects were included in each of these 12 groups.

Mice were exposed to enriched conditions for 6 weeks starting at birth, in adolescence or as adults. Enriched housing conditions involved use of large, two-story cages (45cm x 37.5cm x 39cm), more mice per cage for greater social interaction, a running wheel, tubes, ladders and multisensory toys (e.g., scented plush balls, bell balls). These elements were moved around the cage twice weekly and replaced/rescented as required. Control animals were raised under standard conditions until they reached the appropriate age for analysis. They were housed in standard laboratory mouse cages (32.5cm x 15cm x 16.5cm) in smaller social groups. They were provided with an igloo, tissue for nesting, and sunflower seeds for foraging.

Tracer injections were performed to anterogradely label all projections from each eye to the visual thalamus, a major target of retinal projections. The relative size of the uncrossed projection terminals was measured within the target structure and compared between groups. In order to further determine the time course of, as well as gain insight into, the mechanisms underlying enrichment’s influence on the developing visual pathway, Ten-m3 knockout mice were enriched for one week from birth and compared to standard-housed controls. Multivariate ANOVAs with p < 0.05 were used to test for statistical significance.

We found that exposure to an enriched environment induced a significant correction of the miswired retinal projections. Unlike in standard-housed wildtype mice, where the terminals of uncrossed axons map to one specific region of the visual thalamus, in standard-housed Ten-m3 knockout mice, the output of the uncrossed retinal project aberrantly along the full length of the visual thalamus.

Exposure to an enriched environment for six weeks from birth induced a significant loss of miswired terminals in Ten-m3 knockout mice. Enrichment commenced at weaning or in adulthood had no detectable impact on the wiring deficits exhibited in these animals.

A regional analysis showed that the loss of uncrossed terminals in the visual thalamus of Ten-m3 knockouts enriched from birth corresponded to the most aberrant retinal projections. Enrichment had no obvious impact on the mapping of retinal terminals in wildtype mice.

The effects seen could potentially be due to two main mechanisms: 1) The correction of the initial pathfinding deficit, or 2) enhanced pruning of mismapped projections. In order to separate these possibilities, we asked whether the corrective effect of enrichment was already present following one week’s exposure from birth. If enrichment was affecting initial pathfinding, then a change may already be detectable after this brief period.

We saw no effect of enrichment after one week, suggesting that enhanced pruning is the primary mechanism underlying the correction.

Our findings suggest that enhanced experience can drive the correction of aberrantly wired neural circuits, but only during a brief window in early postnatal development. It appears this may occur via enhanced pruning of synaptic connections. This profound interaction between the environment and neural connectivity has not been previously demonstrated and provides insight into the importance of treatment timing for neurodevelopmental disorders.

Numerous questions emerge from our observations: 1) What is the mechanism underlying the enhanced pruning? 2) What aspects of the enrichment are important for this effect? 3) When is the key period of exposure? 4) What is the impact of the pruning on visual function in these mice? (See Blok et al., 2020, showing that enrichment from birth, but not later, improves performance on a visually-mediated behavioural task in Ten-m3 knockouts). 5) Finally, how can we extrapolate these findings to improve treatments for neurodevelopmental disorders?

Atomu Sawatari, PhD
Atomu Sawatari completed his PhD at University of California San Diego Salk Institute with Edward Callaway. Sawatari moved to Harvard for a postoc and then moved Down-Under to take up a faculty position at the University of Sydney.